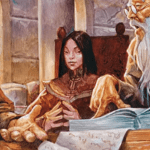 Wizards of the Coast has introduced some wacky magic over the years. From shapeshifting into a bat to attacking your enemies with fleas, all is possible in the vast magical world of DnD. Today we are taking a closer look at the Infestation cantrip. This spell allows you to attack your enemies with little pests like fleas and mites.

Let’s check if the Infestation in 5e is worth getting and how this cantrip works!

Contents hide
How Infestation works and details
Pros
Cons
Is infestation 5e worth it?
When should you use Infestation: Top uses
What you should remember about Infestation
Final words on Infestation
Related Posts:

How Infestation works and details

When you say the magical words, wave your hands around, and offer up your living flea, You cause a cloud of mites, fleas, and other parasites to appear momentarily on one target you can see within 30 feet.

When you cast it, the spell the target must roll on a Constitution saving throw.

At Higher Levels, the infestation spell becomes a bit stronger. The spell’s damage increases by 1d6 when you reach the 5th level (2d6), 11th level (3d6), and 17th level (4d6). So nothing too spectacular.

The following classes can cast the spell

A lot of fun: the spell: from a roleplaying perspective – is a lot of fun to use. There is something about imagining your opponents dying to fleas and mites that is hilarious.

Great for creative players: the fact that your opponent moves in a random direction can be extremely useful in specific scenarios. Imagine there is a cliff, a trap, or a bonfire. The fact that you are using live insects is also interesting if you want to cause chaos.

Needs materials: I am not a massive fan of spells that require you to use materials. In this case, you will need a living flea. So you must carry around a living flea if you plan to use the cantrip.

Weak: the infestation cantrip in 5e DnD leaves much to be desired. The damage is low, it does not become much stronger as you level, and the secondary effect is a gimmick. Next to that, if the target succeeds the constitution throw, nothing happens.

Single target: for some reason, these pests only harass a single target. That is quite a shame as the spell is underwhelming, and making it multi-target would solve most of its issues.

Is infestation 5e worth it?

Generally speaking, there are little to no scenarios where the infestation cantrip is worth picking. The spell has low damage and a harmful secondary effect, and it is hard to combo it with our attacks. If you are looking for fun to use spells, then Infestation is an option, but only then.

When should you use Infestation: Top uses

In a combat situation, there is little chance of this cantrip being the saving grace of the fight. As stated, it has little going for it besides the fact that you might be able to pull off something wacky with the random movement mechanic.

Causing panic: However, if your DM allows creative play, Infestation in 5e DnD can be pretty potent when roleplaying. Imagine using the spell in a crowded square on a noble. When others see that he is infested with mites and lice, his reputation will undoubtedly take a significant hit. Additionally, you might be able to cause a little panic in higher-up circles, as they don’t want to have fleas and mites in their clothes.

Dismounting Riders: You can knock them from their horse because your target gets moved! “If an effect moves your mount against its will while you’re on it, you must succeed on a DC 10 Dexterity saving throw or fall off the mount, landing Prone in a space within 5 feet of it. If the rider is knocked Prone while mounted, you must make the same saving throw.” So this is a pretty fun side effect.

Moving guardians: another great use is to get a guardian, or anything else blocking your path, away from the spot where they are standing. You can use Infestation, get them to move (hopefully) to the side, and try to run past them.

That is about it, unfortunately. The damage is often an afterthought, as six is not much compared to other cantrips. At the higher levels, the damage output of Infestation becomes negligible.

What you should remember about Infestation

Reading the description makes it easy to get lost in what is what. So here are a couple of things you should remember when you use Infestation:

If you went into this article considering picking this cantrip for your character, you are probably having second thoughts right now. Infestation in 5e simply is underwhelming and underpowered. Only when you have a particular build in mind, like an entomancer – a wizard that controls insects – might you want to consider picking it.

If you are a beginner and want to make sure you pull your weight during combat, skip this cantrip and pick something else. If we missed something about Infestation that makes it better or worse than we think, let us know, and we will gladly add your feedback to the article.