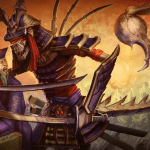 If you enjoy fighting and using unconventional and rare monsters in Dungeons and Dragons, then the Bone Devil in 5e might be just what you are looking for! These Large Fiends are a great option to use as a mid-range demiboss or to use as minions for a big bad villain!

Yet, I do not see a lot of DMs using these creatures in their campaign. So, to give the Bone Devil in 5e DnD some love, here is the complete guide on how to use them, encounter tips, and much more!

Contents hide
What are these monsters?
Bone Devil 5e stat block
ACTIONS
Cool encounter ideas for DMs
Have them ally with your players
Dark Dungeons loot scrimmage.
Minions with excellent teamwork (or not?)
Effective scouts and guards
Player tips and tricks
Watch the tail
Prioritize melee
Watch the skies when it is dark
Bone Devil 5e FAQs
How fast do Bone Devils fly?
Can Bone Devils poison you?
Can you play as a bone Devil in 5e?
Final words and advice
Related Posts:

What are these monsters?

The bone Devil is one of the taskmasters of the nine hells. These D&D monsters are known for the hate and violence that they show to anyone who is not allied with them or their masters.

Bone Devils are known for their (blind) ambition. They strive to get promoted no matter the cost and will try to get other fiends that they consider rivals to be demoted. Anyone deemed superior to these creatures should be wary, as they massively detest anyone who orders them around or is considered their master.

Their appearance is humanoid. However, they have a skull-shaped head and a tail resembling a poisonous scorpion. Their body has dry, tightly stretched skin and large claws. In other words, they won’t win any beauty contests. Bone Devils don’t just look terrible; they have a smell to match it. If encountered in the dark, you often smell them before you hear or see them.

On their backs, they have large wings resembling a dragonfly. Besides being fast runners, they are thus also able to fly. Often they strike from above, pinning their foes to the ground, and then sting them with their poisonous tail to quickly send them to the afterlife.

The skills of this creature are Deception +7 and Insight +6.

The monster also has a couple of damage Resistances, namely cold, bludgeoning, piercing, and slashing from nonmagical attacks that aren’t silvered.

The damage Immunities are fire and poison, so you won’t be able to cast your favorite Fireballs. However, they also have the Condition Immunity against poisoned.

Multiattack. The Bone devil makes three attacks: two with its claws and one with its sting.

Sting, a Melee Weapon Attack with +8 to hit, reaches 10 ft., one target. Hit: 13 (2d8 + 4) piercing damage plus 17 (5d6) poison damage, and the target must succeed on a DC 14 Constitution saving throw or become poisoned for 1 minute. The target can repeat the saving throw at the end of each turn, ending the effect on itself on a success.

If you are a Dungeon Master, you might want to run Bone Devils in your next campaign but aren’t sure how to use them. Here are a few ideas and quests I have run in previous campaigns that were pretty successful and a ton of fun.

Have them ally with your players

Bone Devils are ambitious to a fault and detest those considered superior to them. You might want to use this character quirk to introduce a quest where you help one of these rises through the ranks of the demon armies. The devil gets what he wants, and your players get to decimate many friends. Of course, you can make the Bone Devil backstab them when his goals are completed. These monsters are pretty smart buggers but nowhere near as cunning as liches and others.

Bone Devils continuously seek ways to increase their might and standing in society. One method they might want to try out is exploring a dungeon looking for lost treasures and weapons. Since these monsters have great passive perception and 120 feet of darkvision, they are fearsome foes you do not want to underestimate. Your players won’t be able to take them down quickly with cheap tricks like Dancing Lights.

Minions with excellent teamwork (or not?)

Bone Devils can telepathically communicate over a distance of 120 feet. Thanks to that, it is pretty easy for them to change tactics on the fly and fight much more ferociously than monsters that are more on their own.

However, I enjoy having Bone Devils pull over on one another. For example, one of them gives wrong information to his superior so that he runs into a trap and dies. That way, that devil can take his place.

Despite being large fiends, these monsters make pretty useful scouts if you know how to use them. Since they have decent darkvision, passive perception, and can fly, you can utilize them to scout and keep guards around a point of interest. Their telepathic powers will also help you quite a bit when scouting. They are powerful and can put up quite a fight when your players detect them.

Bone Devils use their tails extensively. When they have the opportunity to sting and poison a target, they will. Protecting against this tail as a player is vital if you don’t want to get the Poisoned status condition for a minute. For example, if you escort an NPC, you might want to warn him against that attack.

It would be best to have a couple of silvered magical weapons at your disposal when you adventure and fight strong fiends. If you have, these are pretty easy to defeat when you have a strong melee build. Your wizards, clerics, and sorcerers must be more creative and focus on buffing and healing the party. The Bone Devil has a magical resistance against both spell damage and supernatural effects, making them quite a hassle.

Watch the skies when it is dark

A monster that can fly, see in the dark, is fast, and can strike hard and fast should be putting you on guard. When the night falls, and you suspect these fiends are around, you would do best to keep a light nearby or have a shelter that can not be swooped in from the air. Of course, you should also have a ranged attack ready to fight or chase them away when they circle you.

Keep in mind that these monsters are pretty smart. While they do not have a ranged attack, they can still pick up a rock and drop it on your players.

How fast do Bone Devils fly?

Bone devils fly as fast as they run, up 40 feet per turn, and you use your movement. This is pretty fast, but not amongst the fastest flyers in DnD.

Can Bone Devils poison you?

A bone devil can use its tail to poison you when you ail the constitution saving throw. When the creature successfully poisons you, you will be poisoned for up to one minute.

Can you play as a bone Devil in 5e?

While the bone devil is not an official race, they are not too hard to homebrew. You can use the faerie template and adjust it to match a friend. This way, you can easily play as a Bone Devil while ensuring you don’t get an imbalanced character.

If you are fighting Bone Devils or are planning an encounter featuring them, keep in mind their treacherous jealous nature. Nevertheless, you might be able to convince them to ally with you for a short period so that these creatures can achieve their goals.

While they are potent fighters that you might want to avoid at lower levels, they aren’t too strong when reaching higher levels.