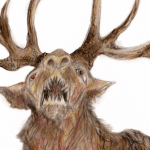 The Peryton is a creature that appears in the Dungeons and Dragons 1st, 3rd and 5th editions. It is a chaotic, evil beast that resembles a large, flightless bird.

The Peryton has few redeeming qualities, it is naturally evil and will attack anyone on sight under the right circumstances. It’s best to avoid this creature at all costs if you are at a low level.

In this guide we will introduce you to this creature, discuss its stats and abilities and give some tips on how to use it in a campaign!

Contents hide
Introduction: The Peryton 5e Monster in D&D
Ecological Niche and Role in the Fey Wilds
Peryton 5e stats and abilities
ACTIONS of the creature
How to Fight Against a Peryton?
How to Use the Peryton in a D&D Adventure
Peryton 5e FAQ
Can you use a peryton as a mount in 5e?
What is a Monstrous Peryton?
Conclusion: What do you think of this new creature?
Related Posts:

The Peryton is a creature that inhabits the fey wilds, especially in areas where natural prey is scarce. It is said to be a forest spirit that takes on the form of a deer or elk when it wants to lure humanoids into its habitat.

Perytons are solitary creatures, but they have been known to gather in small packs when their territories border one another, especially during the rutting season.

The Peryton in 5e is an omnivorous creature with no natural predators except for humankind and other sentient races. The fey wilds contain plenty of food for them, so humans and demi-humans roaming their habitats pose more of a threat than anything else.

They have been known to attack travelers who venture too deep into their territory, and will sometimes follow hunters until they’re far enough away from the forest’s edge for them to attack and eat them.

Ecological Niche and Role in the Fey Wilds

Ecological niches are a type of niche that a creature occupies in an ecosystem. Creatures have different niches depending on their food source, foraging technique, and size. The Peryton is a fey beast that has an ecological niche as an ambush hunter.

Perytons are ambush predators who rely on surprise rather than strength to catch their prey. They hunt prey by spotting from afar and then swooping down from the sky with their enormous wingspan to catch the unsuspecting meal.

In-game they have been known to attack any being they see fit, but in the Fey Wilds, they prefer to lurk in wait for a lone traveler or small group of adventurers.

The nature of their ecology makes them difficult to combat with spells or ranged attacks as they can easily hide behind rocks, large trees, and other objects.

Damage Resistances: bludgeoning damage, piercing damage, and slashing damage from non-magical attacks does only half the damage. Non-Magical attacks are any attack that doesn’t have an innate magical property, such as the flames of a fireball or the poison of an acid splash.

Senses: A passive Perception 15. This helps it detect monsters, animals and, of course, adventurers a lot easier and assists in ambushing them.

Languages: they understand Common but can’t speak. Due to their high intelligence, they grasp reasonably complex concepts. In other words, unlike a Quasit with low intelligence, this beast understands a multiple-step plan.

Challenge 2 (450 XP): This is a very fair CR for this monster, as it is right in the middle of the pack from a difficulty perspective.

Dive Attack. The dive attack is a great way to take advantage of the Peryton’s natural aerial abilities. When the Peryton dives at least 30 feet towards its target and hits it with a melee weapon attack, it deals an extra 2d8 damage plus the damage of its melee weapon.

Flyby. Whenever it flies out of an enemy’s reach, the enemy cannot make an opportunity attack against this monster.

Keen Sight and Smell. A Peryton has an advantage on Wisdom (Perception) checks that rely on sight or smell in 5e

ACTIONS of the creature

They are ambush predators, so they lay in wait for their unsuspecting prey to wander too close. Once their prey ventures near enough to be killed, the Peryton will leap into action, crushing its victim with its powerful jaws or slashing it with its claws.

How to Fight Against a Peryton?

There are many ways in which one could go about fighting against a peryton. When dealing with this monster, one should always be aware of its capability of flight. One could fight it by casting spells, or by holding it down with physical force using grapple. Do not underestimate them, as they are deceptively strong.

These beings are magical creatures that have a form similar to that of a giant eagle with the horns of an adult stag. They feed on innocence and can insert themselves into a person’s heart and turn them evil. Their shadow takes the form of the creature that they last ate, most commonly this is a human adventurer that went too deep in the wilds.

The first and most important thing to do is to be very cautious. If you happen upon a Peryton, you should not provoke it or run away from it as that will only anger the Peryton. You should instead attempt to approach it as calmly as possible and persuade it to stand down, but you need to do this with caution as well.

How to Use the Peryton in a D&D Adventure

The Peryton is a creature that is not featured in the D&D Core Rulebook. It is most often used in adventures or campaigns where the PCs are in a rural setting or when things need to be made more difficult. This is an evil magical beast. It has the haunched look of a hawk and the body of a man. It stands about 10 feet tall and weighs about 600 pounds.

The monster is often used to surprise players since only a minority of adventurers have ever fought one, I’d even go as far as to say the majority of 5e DnD fans have never heard of them.

The Peryton will attack any PC that it detects, using its powerful claws to rip through armour and flesh. The monster can be an effective monster for your party when they are in a woodland setting.

They are most effective at night when they can fly over the party and descend upon them quickly, which makes them an excellent choice for when you want to make things more challenging for your group.

Perytons are cruel and sadistic creatures that enjoy capturing their victims alive and then subjecting them to fiendish tortures before finally killing them in the most gruesome way possible. They seem to be drawn to places where people suffer or die; they frequently haunt battlefields. This hawk-like monstrosity also preys on humanoid children. So you can use them as a side quest for your players, to save village children or help protect a rural hamlet.

The fact that their shadow takes the form of what they have fed on last has a ton of creative potential for luring players into traps.

Can you use a peryton as a mount in 5e?

A peryton is often considered to be an evil, dangerous and untamable beast. It is the quintessential example of a rogue creature in 5e. A player who tries to mount one would be at risk of death since the peryton will most likely not cooperate.
A player can mount a peryton with caution and preparation only if the creature has been tamed beforehand. A good way to do this is to feed it some meat or offer it its favorite delicacies when trying to befriend it.

What is a Monstrous Peryton?

Conclusion: What do you think of this new creature?

The Peryton has been around since the first edition of D&D. The monster is an intelligent but feral race that dwells in the outermost stretches of the Feywild. Using it in your campaign is almost always a great idea.

A Peryton’s mastery of flight gives them unmatched mobility, and they can quickly close the distance on their prey. A flying monster makes combat more challenging and gives you more to work with as a Dungeon Master.

The fact that the natural terrain where you can find the Peryton is challenging in itself makes this bird-like monster amazing to ambush a party of adventurers when they least expect it. This is a definite A-tier DnD creature in our book!