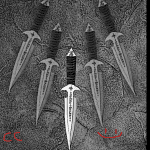 There are a lot of misconceptions about the spell. In order to clear things up, this guide was put together to answer all of your questions. The Cloud of Daggers in 5e is not only powerful but also underrated.

The Cloud of Daggers conjuration spell allows you to create a wall of stationary knives that can be used to lockout or trap enemies from long ranges. This guide will explain to you how to use this attack and how it can be helpful in various situations.

Introduction: What is the Cloud of Daggers Spell?

Cloud of Daggers is a level 2 conjuration spell found in the player’s handbook fon page 222. This magic attack is on the spell list of four different classes in 5e. These four are the bard, wizard, sorcerer, and warlock. The spell requires you to concentrate and use three components: Verbal, Somatic, and a sliver of glass.

What happens when you cast the spell

When you cast Cloud of Daggers, a 5×5 feet cube is instantly filled with spinning daggers on each side. The cube and daggers are centered on the point of your choice within 60 feet range.

Whenever a creature moves into the area of the cubes, the creature takes 4d4 slashing damage. However, it only takes damage if it is the first time on a turn or if the creature starts its turn within the cube.

Like Fireball, the damage can be increased by placing the spell in a higher slot. Doing so will increase the damage output by 2d4 per slot above the 2nd.

Note that this is all guaranteed damage. There is no saving throw to half the harm of Cloud of Daggers, and thus a creature will always take the full 4d4 slashing damage. This effect is analogous to Magic Missile. The magic missiles also harm the target without the possibility of rolling a to hit or saving throw.

A reminder for newer players

Conjuration spells have a range of effects, from summoning a powerful spirit guardian to pulling an object from another plane of existence. The quintessential example of a conjuration spell is the level 5 Conjure elemental, which demands an elemental to fight for you.

So, how can we use this spell to its full potential? To answer that question in a meaningful manner, we should first examine the advantages, and disadvantages Clouds of Daggers has.

1) The cloud of daggers spell can be cast quickly – it doesn’t take too many seconds before the spell’s effects are seen by the caster.

2) It is ideal for those who want some essential protection at their disposal. Even more so if you don’t want to spend too much time preparing.

1) Cloud of daggers 5e is a concentration spell, and it only lasts 60 seconds, which is very similar to moonbeam. There is no way to increase the duration. On the other hand, it is possible to decrease the time by dispelling it or losing concentration.

2) You need all three components (Verbal, Somatic, and Material) to use the attack. In addition, your character is required to be able to make audible noises, move freely and have a sliver of glass to use this magical attack.

3) The daggers are stationary, so wherever they have been cast is where they will remain. Therefore, you can not move them from their place, and you will need to dispel them and cast a Cloud of daggers somewhere else.

How to use Cloud of daggers

Do massive damage by holding enemies in place

Due to the excellent scaling of the spell with your character’s level, Cloud of Daggers is the DnD spell that does the most damage to a single target in 5e.

To achieve this output, you need to keep your target in place. You can do this by grappling a target and keeping it in the cube of daggers or using a web to hold the creature in place. When the target starts its turn in the cube filled with spinning daggers, it will take a guaranteed 4×4 slashing magical damage.

Locking off an escape route

Thanks to the 60 feet range of the spell, you can often cast a cloud of daggers behind your enemies. This tactic is beneficial when you are in combat in a hallway or a cave.

Image you fighting a hoard of goblins or skeletons and zombies who try to retreat. When you cast this 5x5x5 spell behind them, they have no choice to go through the wall of knives and take considerable damage to their Hit Points.

Combine it with Eldritch blast

Cloud of daggers is one of the best level 2 spells a Warlock can have in 5e. Your warlock can combine this attack with the variants of the Eldritch blast. First, you use the Agonizing Blast as your bonus action when you have the quickened spell. Then you use the magic Repelling Blast to blast your target in the Cloud of daggers you have set up.

The creature will take damage from the daggers on its turn. Then, when the monster has left the daggers by running away from you, simply cast Grasp of Hadar to pull the creature back into your cube of knives.

Hit multiple enemies at once

The volume of a Cloud of daggers is 125 cubic feet. When your dungeon master is using a grid, the spell can cover a maximum of four squares on it. That indicates depending on the size of the enemies; you can hit four of them at once. In this scenario, we assume that we are dealing with humanoids or humans.

The Cloud stays up for 60 seconds when it is not dispelled. But, of course, in case your DM has sent a mob of monsters at you, this number might be multiple times higher if those creatures just mindlessly run through.

What is the area of a cloud of daggers?

A Cloud of Daggers has an area of a cube of 5 feet on each side, so 5 feet high, 5 feet long, and 5 feet wide. So if we want to calculate the area, we need to figure out the volume of the cube. We do this by using the formula for the length (ft) × width (ft) × height (ft). This gives us 5 feet x 5 feet x 5 feet, which equals 125. So these numbers show us that the area of the Cloud of daggers is 125 cubic feet.

Does the Cloud of daggers move?

No, the Cloud is wholly stationary and does not move from the spot where it appeared after it was cast. The 5th edition DnD rules do not say anything about movement, so it is impossible to move them.

Is Cloud of daggers magical damage?

Yes, the spell does magical slashing damage. Since the daggers have been magically conjured, and the damage is caused by the spell effects, the damage done is qualifies as magical damage.

Does Cloud of daggers do damage when cast?

Cloud of daggers can do damage when it is cast. The prerequisite for this is that the target enters the Cloud when it has been cast. This only happens when the creature has been in movement during your turn, which is, e.g., the case when you use a spell with a magical pulling or pushing effect as your bonus action. In any other scenario, the target will take damage in its turn.

Cloud of Daggers is a stunning spell that is not given the credit it deserves. This magic attack is often underestimated and forgotten, but it’s actually powerful. D&D players should strongly consider adding this 2nd-level conjuration spell to their spellbook.

The Cloud of Daggers spell can be used in a variety of scenarios, including locking off an area and dealing with hoards of mindless undead. In addition, it can be utilized to escape combat or escape from an enemy to give the caster more time to heal themselves.

We recommend our Magic Stone 5e guide if you are curious about other undervalued magical attacks.