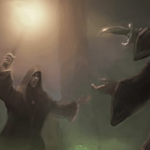 There is nothing that could be faster at completely dissolving anything that is placed into a container with it than that Acid; It can burn through most material if enough is used, including the human body and metals that normal means of cutting through without special, heavy-duty equipment would be seen as impossible.

So, to take the destructive power of Acid from a safely contained space inside of a laboratory out into the world of Dungeons and Dragons, one would have to take the Acid Splash spell whenever they chose to.

Contents hide
What is 5e: mechanics and requirements
Attributes
Acid Splash description
Advantages and drawbacks
Advantages
Multiple targets can be hit with this spell
A much further range than other Cantrips
A lack of any physical material needed for casting.
A Cantrip by nature requires no slots
The Damage evolves with the Player on occasion
Disadvantages
The Spell could be forgotten about when the damage would be increased.
The Spell cannot melt through non-living objects.
Best uses for Acid Splash 5e
As a long-ranged attack, either as a low-level spellcaster or when one runs out of slots.
To find Mimics within an area.
Advice and final thoughts
Acid Splash Spell FAQ
Can a player use the spell and bottle the acid, making an easily exploitable method of making gold?
Would Alchemist Artificers be able to benefit from the spell more than other classes could?
Is this spell better than other pure damage spells like Fire Bolt, Ray of Frost, or Shocking Hands?
Related Posts:

What is 5e: mechanics and requirements

You hurl a bubble of acid. Choose one creature within range, or choose two Creatures within range that are within 5 feet of each other. A target must succeed on a Dexterity saving throw or take 1d6 acid damage.

Multiple targets can be hit with this spell

If the caster decides to throw the acid bubble at two targets and they are within 5 ft of one another, then they both can be damaged by the acid attack, given they fail the Dexterity Saving throw required for them to make once the spell is cast and makes contact with them.

A much further range than other Cantrips

Most Cantrips that can be chosen by a player when building their spellcaster normally have a fairly limited range. However, Acid Splash 5e is one of the Cantrips with a longer range than a majority, as its 60 ft range is only equaled by another seven spells and is surpassed by an additional five spells hold a range of 120 feet. With this extended range, Acid Splash has the potential to hit enemies that are much further away from them, keeping the caster further out of harm’s way and giving the enemies less room to be able to stay out of the caster’s range.

A lack of any physical material needed for casting.

The spell has no limit on the physical material needed to be able to utilize it due to the lack of one being required, making it easier to be able to spam the Acid Splash spell in DnD during combat encounters, especially if combined with Spell Sniper to double its range from 60 ft. to 120 ft.

A Cantrip by nature requires no slots

As stated above in the previous advantages, the Spell is a Cantrip, meaning there are no spell slots that limit how many times the spell can be cast during a combat encounter. Pairing this with the lack of a physical material needed for casting permits the caster to constantly throw the Acid Splash spell at enemies from afar without ever having to worry about running out of materials or spell slots that would otherwise prevent them from doing that.

The Damage evolves with the Player on occasion

As the player gains more levels throughout the campaign, the cantrip’s damage increases by a single die each time a milestone is reached at levels 5, 11, and 17. This increase in damage could keep the Acid Splash spell as one that is commonly reused without worrying about it being too weak to be able to do anything to enemies in the mid-to-late game of the campaign. Especially when they have other spells with limited spell slots that could be utilized instead.

The Spell could be forgotten about when the damage would be increased.

Depending on how the player wishes to play their character, which is also dependent on the class they had chosen, a character might decide that Acid Splash is just not a spell worth getting, especially when they feel like going with a different school of magic.

They could even outright ignore the spell if they do so after reaching a few levels into their character. Even if they had been using it before, a player could easily decide to focus on using the higher-tier spells that utilize spell slots. They then only have Acid Splash as a back up in case they ever run out of spell slots or materials to be able to cast their desired spells.

Due to the way that the spell is written, the acid flung via the spell cannot dissolve non-living objects such as wooden tables, metal doors, or stone walls. This does limit its usefulness a little bit in one area, though it does open the door to a more unorthodox method of usage which will be described later in the next section.

As a long-ranged attack, either as a low-level spellcaster or when one runs out of slots.

As mentioned previously, the spell can be used at a much further distance, giving them a larger area in which they can attack their foes without being brought into a direct line of harm by the enemies (Unless they’re spellcasters or archers that can reach them).

Even when the player who took the Acid Splash spell decides to no longer use it as often and instead focus more on their leveled spells that go well beyond the damage capabilities of the spell as a whole. They could still use it on occasion either out of boredom; they run out of spell slots for their standard go-to spell level within their list, or they run out of the materials needed to cast their higher hitting spells and still need to damage an enemy or two at range.

To find Mimics within an area.

A slightly unorthodox usage of the spell, Acid Splash can assist in checking for mimics within an area where a party could suspect one or more of them currently reside. This is due to how the spell is written, in which the spell cannot damage non-living objects, as previously mentioned above.

This means that although normal objects that would be in a room, such as a piece of furniture, would be unharmed by the spell’s effects, mimics who have disguised themselves as furniture would be harmed by the acid, thus forcing them to drop their deception and reveal themselves to the party.

Of course, that is if the Dungeon Master has decided that Acid can harm Mimics, as normal Mimics are normally immune to acid, but that can change based on DM Ruling.

Overall, the spell can still be utilized throughout a player character’s journey through a campaign, either as the main source of damage output from a low-level player, as a backup plan, or as an unusual tool in hunting a specific type of monster within the world once they reach higher levels of spell casting and combat in the game.

Suffice it to say; the Acid Splash spell can be quite fun to toy around with in other ways outside of what had been discussed in this article, though any would have to be discussed with one’s Dungeon Master and agreed upon as to whether it would work within their campaign or not.

Can a player use the spell and bottle the acid, making an easily exploitable method of making gold?

Due to the way that the spell works, in which the spell is summoned, thrown at an enemy, and then dissolves once it either hits or misses, The acid created from the spell wouldn’t remain long enough for someone to be able to bottle it up and sell it. However, nothing is stopping the Dungeon Master from saying that they can do that, to a certain extent, before they are cut off.

Would Alchemist Artificers be able to benefit from the spell more than other classes could?

Indeed they could, though in this question, we’ll focus solely on the way Alchemist Artificers can benefit more from the spell than others could. Thanks to a part of the Alchemist Archetype that gives extra damage based on their Intelligence Modifier, the spell could deal more damage to both of the selected targets for the spell.

Is this spell better than other pure damage spells like Fire Bolt, Ray of Frost, or Shocking Hands?

Out of the four spells, Acid Splash does the least damage, but depending on how the player wishes to build their character, they could go for any option they choose out of those four or multiple options from the quadruple selection.