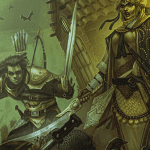 The necromancer is fun built with a lot of versatility and powerful spells to rely on. However, there is much more that you will need than just a spell to make an unbeatable necromancer. Therefore, we have created a ranking with the best feats for a necromancer in 5e DnD.

We didn’t rank these feats for a necromancer randomly. To do this, we used the following criteria to ensure this list was as accurate as possible.

We will take the archetypal necromancer as our starting point. That means a spell caster mainly focuses on raising the dead and using necromancy magic. Of course, Dungeon Masters who are homebrewing a necromancer boss to fight the party will also have plenty of helpful information.

Note: If you are building a necromancer in 5e, you will definitely love our article on Best Race for a Necromancer.

Top 8 Feats for a Necromancer

Inspiring Leader is one of the best feats to have as a necromancer commanding an army of undead. To use this feat, you must have a CHA stat of at least 13. You can then spend up to 10 minutes inspiring your allies and companions.

Choose up to 6 creatures (which can include you) that you can see in a range of 30 feet and that can hear and understand you. All these creatures will get HP equal to your level plus your CHA modifier.

If you have 6 undead fighting on the frontlines, this can easily give them a total of 50 Hit Points at higher levels. Which helps them soak up damage, stay in the fight longer or give you ample opportunity to shoot off spells like Cloudkill.

You might not have suspected to see this feat so high on the ranking for best feats for a necromancer in 5e DnD. However, you should not underestimate the Skilled feat of this built.

You should make yourself proficient with Smith’s Tools, Woodcarver’s Tools, and Leatherworker’s Tools. This will allow you to use the fabricate spell in 5e and create everything you need to arm your army of Zombies and Skeletons. Both can wield weapons and armor. So this gives your minions a massive buff for an attractive price.

You can find the source for being able to arm zombies and skeletons in the official DnD player manual.

This is what you should fabricate with the spell to arm your hordes of the undead:

Ironically, Healer is one of the best feats for a necromancer in 5e. This feat allows you to heal undead, too! There is no limit on creatures you can heal with Healer, so this is perfect for restoring your army in between fights when you have time to take a break.

The Healer feat has the following two effects that you can use to mend your undead army:

This feat is solid for the necromancer who wants to get more out of the army of undead and doesn’t want to bleed numbers too much.

I am sure that many of you will be surprised to see that the Warcaster feat only comes in fourth place on our list of best feats for a necromancer in 5e dnd. However, you get a few exciting perks when you have this feat as a spell caster.

This is an excellent feat for a caster that is more on the frontlines and does not overly rely on your minions. So if you have a necromancer that does not uses zombies and skeletons (that often), this is a fantastic feat to work with.

The necromancer needs to be a smart cookie to fight and devise plans. Keen Mind is probably the feat that will be used the most. While the rest are all combat-specific, a keen mind works in many situations, both in and outside of combat.

When you pick this feat for your necromancer, you will have the following four perks

As you can see, this feat is fantastic for roleplaying and getting around in the world. The last perk on the list is beneficial if you are doing a campaign where you have to figure out clues about who the villain is. Of course, as a villain, the last perk is useful too.

If you want more spells, then a spell sniper is a pretty helpful feat as a necromancer and magic caster. Here are the perks of picking Spell Sniper:

As the name implies, the spell sniper is great for a built that lets its minions fight in close combat while shooting the enemy from afar. In addition, having a doubled range is extremely powerful when you rely on spells that already have a 120+ feet range.

Lucky is another fantastic feat for a necromancer you might not expect to see on the list. When you have lucky, you have three luck points. You may spend a luck point every time you make an attack roll, a saving throw, or an ability check. You can then roll another d20. Finally, you choose the result you are going with.

Lucky is great when you are afraid of getting hit by a strong attack or if you want to give your spells a little more accuracy when fighting.

Using a luck point when an attack attacks you is also possible. You then roll a d20 and choose which d20 is used, yours or the attacker.

You can use Lucky after the original roll but only before the roll’s outcome has happened or is revealed.

For Dungeon Masters, this feat is excellent to give to bosses as a way to make them a little stronger. Just make sure you don’t buff your encounters too much so you don’t wipe out the whole party too easily.

You might have noticed, but magic casters, in general, should stay away from the frontlines as much as possible. As a necromancer, you can send armies of undead to fill the gap between you and the enemy, but sometimes a creature or an attack gets through unexpectedly.

Resilient is a remarkable feat if you want to buff your CON a bit, so you stand more of a feeling or fighting chance when your lines have been breached. When you have resilient, you can choose an ability score and increase the ability score by one up to 20, and you can gain proficiency in saving throws using the chosen ability.

If you invest this +1 into Constitution, you will get the most value out of the feat.

As you see, there are quite a few surprising feats on this ranking. The best feats for a necromancer in 5e are Inspiring Leader and Skilled. In our opinion, these two are just what you need to buff your army and give them the edge they need to transform from cannon fodder to worthy opponents.

If you do not rely on minions and are fighting on the frontlines with your party, then a few decent feats for a necromancer in D&D help you with your low AC and CON.

While this ranking has been researched very thoroughly, the best feat for a necromancer depends on the situation and what your Dungeon Master is sending your way. Next, because Lucky and Resilient are so low on the list does not mean they are bad. They are still in the top 8, so if you pick those feats, you will still have an extremely potent necromancer to fight with.

Make sure you have read these guides if you are a necromancer and want to throw a wrench in your DMs plans!