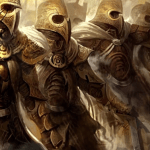 Earth Bending is pretty fun in Dungeons and Dragons. There aren’t a ton of spells related to the element, but most of them are a blast to use and deceiving strong in the right situation. Erupting Earth in 5e is a great level 3 spell to choose if you want an alternative to staples like Sleet Storm and Fireball. Let’s look at the mechanics and the best uses for Erupting Earth.

What is Erupting Earth 5e: mechanics and requirements

* To cast Erupting Earth, you must have a piece of Obsidian. For reference, an Obsidian piece should be between 1 square cm and 1 square inch. The material will be consumed when you cast the spell.

Say the magic words, choose a point you can see on the ground within range, and offer up your piece of Obsidian. When doing that, a fountain of churned Earth and stone erupts in a 20-foot cube centered on that point. Each creature in that area – including yourself and your allies – must make a Dexterity saving throw.

Additionally, the ground in that area becomes difficult terrain until cleared. Each 5-foot-square portion of the area requires at least 1 minute to clear by hand.

Upcasting Erupting Earth 5e: When you cast this spell using a spell slot of 4th level or higher, the damage increases by 1d12 for each slot level above 3rd.

Erupting Earth is one of those spells that leaves a lasting mark on the world. If you have the time, you can use the spell to shape the battleground to your liking and strategically make certain areas difficult terrain.

Of course, there are many more places you can mess with besides the battlefield. Just think about busy trade routes and entrances to a city or building.

Are you being stormed by Bandit Captain minions or a whole army of weaker creatures? Make sure to give your party extra time and advantage going into the fight by casting Erupting Earth.

Not just can you deal a ton of damage to those within the Area of Effect, but you can also mess with the movement economy of the enemies coming after them as they have to cross the terrain to get to you.

If you are playing as a druid in 5e, you surely have realized by now that Fireball is nowhere to be seen on the standard spell list. Well, you will need to find an alternative if you want to deal a good amount of damage to large groups.

Erupting Earth might not have the raw damage output, but thanks to the secondary effect and upcasting, it is an excellent alternative to Fireball for druids.

As stated, magic bludgeoning damage is a rare type of damage that is resisted by almost no monster. So, unlike spells that deal ice damage like an Ice knife or fire damage, you won’t often run into a monster that tanks your DPR.

Thanks to the long range and the fact that it is an AOE spell that makes movement more complicated, it is an excellent way for players to support their frontliners without being in danger.

Many players think they have to fight every battle to the bitter end. However, there is an art that is often a much better option: running away. When you want to get out of a problematic situation, increasing your movement speed and/or decreasing your opponent’s movement speed is vital.

Erupting Earth is a great way to do this, as you can make a terrain challenging to traverse. This messes with your opponent’s movement economy quite a bit and can allow you to strike back.

While Erupting Earth 5e is not the best pick for your third spell slot in many cases, it is not a bad one either. Because so few players use it and many Dungeon Masters completely forget about the secondary effect (difficult terrain), Erupting Earth is a great alternative and maybe a must-have pick for a Druid.

Remember that the Difficult Terrain does not end after the spell has resolved or even after the fight has been fought. It needs to be manually (or magically) removed. So you can wreak some havoc on your DMs plans, the surrounding trade routes, or the foes planning a siege.

How tall is Erupting Earth 5e?

When you cast Erupting Earth, a 20-foot cube is affected. Since the spell likely does not go down in the Earth itself, the height of Erupting Earth is 20 feet.

What is better: Erupting Earth or Fireball?

In most cases, Fireball is the stronger pick out of the two. However, because so many monsters have fire resistance and the decent upcasting of Erupting Earth, Erupting Earth is preferable in many scenarios.

Is Erupting Earth a good spell in 5e DnD?

The spell is well worth it, depending on the class you are playing. In my experience, Erupting Earth is one of the best level 3 druid spells and an excellent pick for the wizard and sorcerer.