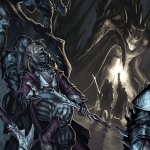 Wondering how to use obscure spells in Dungeons and Dragons? Then I have some good news for you, adventurer! In this series of articles, we are taking a closer look at Dust Devil 5e, how it works and its best uses!

Contents hide
Mechanics and Requirements for Casting
Requirements for Casting:
Spell description
Advantages and drawbacks
Best uses for Dust Devil
1. At the start of combat
2. A quick getaway
3. Protect from projectiles
Advice and final thoughts
Dust Devil 5e FAQ
What makes this spell better than any of the other 2nd-level spells that Druids, Sorcerers, and Wizards can cast?
What will happen to my fellow party members if they end up in the dust devil with the enemies?
Does the effect of Dust Devil change as I upcast it to a higher spell slot level?
Can Dust Devil 5e be used to watch over the party during a long or short rest?
Related Posts:

Mechanics and Requirements for Casting

Choose an unoccupied 5-foot cube of air that you can see within range. An elemental force that resembles a dust devil appears in the cube and lasts for the spell’s duration.

Any creature that ends its turn within 5 feet of the dust devil must make a Strength saving throw. On a failed save, the creature takes 1d8 bludgeoning damage and is pushed 10 feet away. The creature takes half as much damage on a successful save and isn’t pushed.

As a bonus action, you can move the dust devil up to 30 feet in any direction. If the dust devil moves over sand, dust, loose dirt, or small gravel, it sucks up the material and forms a 10-foot-radius cloud of debris around itself that lasts until the start of your next turn. The cloud heavily obscures its area.

Upcasting: When you cast this spell using a spell slot of 3rd level or higher, the damage increases by 1d8 for each slot level above 2nd.

The Dust Devil Spell can really help against a large group of enemies that happen to be together since a creature has to only be within 5 feet of the dust cloud to be affected by the spell and what it can do.

However, this spell does not differentiate between friend and foe, making situations of friendly fire easy to achieve if someone casts the spell without making sure their party members are not in the way. The spell’s material component is also reasonably easy to collect, making use of the spell a common ability, so long as the caster has the necessary 2nd-level spell slots for it.

Thanks to the bonus action it has, you can also change its position and make sure that it properly changes according to the battlefield, making the damaging effect of the spell reach a further distance than if it was mostly stationary.

The last downside of this spell is mostly due to the nature of the spell and what it does, but it can easily be brushed aside by any usage of spells that control the wind, such as the “gust of wind” spell, though this is mainly up to how the DM rules it in regards to whether the spell can be used in such a way or not.

1. At the start of combat

The absolute best time to use this would be at the very beginning of combat, as so upon the use of the spell, the spell itself can hit the most number of enemies while also keeping the number of accidental cases of friendly fire to a minimum. As stated in the previous section, the best use for this spell is against a larger group of enemies, whether they are already combined or not.

It is possible to try and coordinate with your party members to attempt to corral the enemies into a more favorable situation/position where the said spell can affect them the most, but this does have a chance of hitting both the intended hostile targets and the other members of the party.

It can also be used to make a quick getaway, or at the very least make movements that the enemies within the game can’t see to a certain extent, thanks to the reduction of visibility that the spell causes by heavily obscuring whatever area it is currently residing in.

Reading tip: want to run away even more effectively? Check out how you can do this with Erupting Earth!

As a similar use as described previously in the paragraph, not only can it be used to assist in a cleaner getaway from some enemies, but it also gives the enemies within the cloud a harder time being able to hit any of the party members with a ranged attack.

This means both spell casters, magic stone 5e users and archers attempting to attack the party will have a higher chance of missing the target, depending on what reduction their chances to hit they take is decided upon by the Dungeon Master.

The usage of this spell is more of a distraction than anything else, and I believe it should be used as such. Not only does it help mask what your allies are doing on the other side of it to those who are inside of the dust devil, but are also damaged by it.

This also works as a great starter spell once someone reaches a high enough level to be able to cast 2nd level spells, as the cost of the materials needed to cast the spell can be pretty much found anywhere. Overall, This Spell works great for a variety of uses, both within and outside of combat.

What makes this spell better than any of the other 2nd-level spells that Druids, Sorcerers, and Wizards can cast?

The Dust Devil spell doesn’t truly surpass any of the other 2nd-level spells that can be used within the spell lists of the classes listed as those that can use this spell. However, I do believe that this spell can be used in a combined effort with other spells, preferably ones that do not require concentration as this one does. This spell also works perfectly as a source of crowd control, which granted many other spells do indeed do, but a majority of those spells reside in a higher spell slot level than this spell does, meaning it would take a player longer to get to said spells before reaching this one.

What will happen to my fellow party members if they end up in the dust devil with the enemies?

As described in the description of the spell above, any creature inside of the dust devil, friend, or foe, must make the Strength Saving throw required. If they fail, they take the damage rolled with any other enemies who failed, or half damage if they succeeded in the saving throw.

Does the effect of Dust Devil change as I upcast it to a higher spell slot level?

The primary effect of the spell itself does not change when being upcast to a higher spell slot level. However, the damage the dust devil does to enemies does increase by a d8, based on how many level slots past 2nd level the caster chooses to cast the spell at.

Can Dust Devil 5e be used to watch over the party during a long or short rest?

As described in the spell’s description and in other parts of this article, the Spell only has a duration of 1 minute, before dissipating away and being removed from the area. This means that No, it cannot be used to cloud the party during either form of resting, long or short. However, there is nothing stopping the Dungeon Master of the Campaign/Party from using this spell to bend the rules a bit and allow for such use, though it is always best to ask them if they will allow it before doing so, as to not cause any arguments between players and the dungeon master running the game.