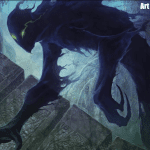 Many monsters in 5e D&D don’t see enough play in a standard campaign. One of the most underestimated monsters from a narrative and fun perspective is the Shadow Demons in 5e. These chaotic evil monsters are great to base a side quest around and test newer players with a strong monster with a good amount of immunities and resistances.

If you are a DM who wants to try and run a Shadow Demon in 5e D&D, then this is the guide for you. Players, too, will get a lot of helpful information here about how to counter these monsters and what to look out for.

The Shadow Demon is a Medium Fiend, which is Chaotic Evil.

As expected from a shadow monster – much like the specter – these monsters have barely any STR. However, they do have a decent INT and CHA stat. In addition, their Dex is their best stat by far, which makes them pretty agile and dangerous in some situations.

Shadow Demons attack with their Claws. This is a Melee Weapon Attack with +5 to hit and a reach of 5 feet. The attack targets one creature. A hit deals 10 (2d6 + 3) psychic damage or, if the demon had the advantage on the attack roll, 17 (4d6 + 3) psychic damage. Psychic damage is quite an uncommon damage type to have resistance or immunity to, so make sure your allies and NPCs have a way to deal with this danger.

What are they, and what lore?

Shadow demons are often referred to as Shadow Fiends, as they are also a type of fiend. These demons result from an essence that has not been appropriately reformed in the abyss. A shadow demon is thus a much weaker version of the original demon. (Plot hook idea?).

In a demon society, hierarchy is king. However, the Shadow demons seem to be an exception to this rule. These monsters are often found beside the standard hierarchy. They perform exciting roles for other demons (and those they have a contract with).

Here are some things that the Shadow Demon in 5e dnd is very suited for:

They don’t just perform these tasks for other demons but evil dragons, mages, and others aligned with evil. For some reason, Shadow Demons are often found in the employ of Ancient black dragons.

In terms of how they act and behave, they are chaotic evil beings with a strong urge to sow corruption amongst mortals. These demons strive – generally speaking – for the obliteration of all mortal life. However, they do not care about power or status, making them different from devils.

Someone is spying on adventurers

Knowing who might pose a threat – now and in the future – is vital if you are a wicked ruler or an up-and-coming evil overlord. Shadow demons are the perfect monsters to stalk adventurers on their adventures and see which ones have the talent to become a threat in the future.

They can hide away quickly, pass through walls, and are an excellent stealth bonus. These factors make the shadow demons one of the best spies you can have under your command.

These monsters are intelligent enough to know what is going on and to follow commands. Thanks to their telepathy of 120 feet, they can work in a team and pass each other information quickly.

Is someone being a pain and preventing your evil plans from coming to fruition? Is there a looming threat for the evil-doers of this world? The shadow demon is great for assassinating talented but still weak adventurers and taking out those who might pose a threat to evil plans.

Again, thanks to their telepathy and ability to sneak around, these are very dangerous foes that you should not underestimate. Even more so if you are fighting on their terrain and they have plenty of hiding places or walls to pass through.

The scouts you always wanted

Have your players used mind spike on an NPC, and now they know where the lair of the big evil antagonist is? Well, if he has a couple of shadow demons 5e under his command, he will be able to know exactly where they are and prepare for their arrival.

If these monsters know the terrain and the adventurers do not have an idea that these monsters are following them, you won’t be surprised. The odds are high that they won’t suspect a thing, and the shadow demons will know all their moves.

Are your players getting a bit cocky after their first few encounters and thinking they are a bunch of invincible hot shots? A great ambush with a monster that can hide away and has a bunch of immunities and resistances is sure to keep them on their toes next time. Bonus points if one of them has to make a death-saving throw.

Because Shadow demons can telepathically communicate with one another, they make fearsome opponents in pairs or in sets of three or more.

The only vulnerability that the shadow demon has is radiant damage. Paladins and Clerics are the two classes that often have access to a spell that deals some kind of radiant damage like Holy Weapon.

If your paladin or cleric gets taken out, you suddenly have a monster to deal with that is immune or resistant to almost every type of damage you throw at it. At the lower levels, when you have a limited amount of spells and attacks to choose from, this situation can be hazardous.

Make sure you read our guide on Life Domain Clerics and the best race for a paladin to make a powerful build!

Darkness, and heavily obscured in general, make your opponents blind and disadvantage them. Your shadow demons have darkvision, which means they can see in nonmagical darkness as if it was daylight. Moreover, they also have a bonus action where they can hide away. Finally, they also know the position of the others within 120 feet due to their telepathy.

Long story short, shadow demons in not just shadow but pitch black darkness are mighty. They can hit fast and hard; after that action, they can hide away.

Shadow demons get considerably weaker when they are exposed to bright light. As a result, they get a disadvantage in their attack roles. This disadvantage is essential if you want to survive without losing a team member. Putting them at a disadvantage will also make protecting the cleric or paladin much easier.

Many DMs overlook one of the more obvious strengths: Shadow Demons can move through obstacles. For example, they can go through walls when the battle is too challenging or ambush players from behind in a room with only one door.

The fact that they can escape so easily from battle and reappear again is just perfect. For bonus points, you can have one shadow demon dip out from battle and telepathically communicate to another that it is time to step in the attack. This strategy is even more powerful if your party thinks they are only fighting one shadow demon, not two or more.

No, in the 5th edition of DnD, shadow demons are classified as Fiends.

Can you have a shadow demon as a familiar in 5e?

Yes, you can if your DM allows it. They are often employed by non-demonic creatures like wicked rules and evil ancient dragons. However, they do want a master that is evil too.

For some reason, Shadow Demons don’t get a lot of love from Dungeon Masters. However, similar to Guard Drakes and Helmed Horrors, they are very versatile creatures that are both fun to use in combat and to build stories around.

If you are a dungeon master, you should try to use their sneak abilities and darkvision in combination with the fact that they can pass through solid objects. Those abilities are all very potent if you are running a single encounter. If you are using multiple shadow demons in 5e DnD, you can have them communicate with one another telepathically.

If you are a player confronted with a shadow demon, ensure you protect any team member who can deal radiant damage, as that damage type is their vulnerability. A way to skirt around their immunities and resistances will help you take these creatures down quickly and easily.