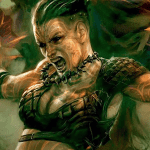 Greetings and Salutations, Sorcerers, Wizards, and Warlocks! Are you looking for an enjoyable, non-conventional cantrip for your (new) Character? Lightning Lure in 5e DnD is a fun evocation that is strong and fun to use. However, it is not on our list to make the best possible level 1 character in dnd.

While it is not the strongest cantrip that these classes can pick, it does scale with how creative your brain is and is an original pick that gives some extra personality to your new Character. In this guide, we will tell you everything there is to know about Lightning Lure 5e DnD.

What is Lightning Lure 5e, and how does it work

The source of this spell is Tasha’s Cauldron of everything. An official WoTC compendium for Dungeons and Dragons.

When you cast the Lightning Lure cantrip, you create a lash of lightning energy. You can lash a creature of your choice within visible range and 15 feet. The target must succeed in an STR throw; if it does not, it will be pulled 10 feet towards you and take 1d8 damage if it is within 5 feet.

Upcasting Lighting Lure: The cantrip becomes stronger as you level your character. At level 5, it does 2d8 damage; at level 11, 3d8 damage, and at level 16, it becomes 4d8.

So, when should you use Lightning Lure in 5e DnD? There are a couple of great uses for this cantrip you might not have thought about.

Combine with Cloud of Daggers

One of my favorite uses for Lightning Lure is to cast Cloud of Daggers first and then use the lightning lure to pull the target inside that cloud. Cloud of Daggers is one of the highest damaging spells in D&D that you have access to from an early level and can scale quite nicely too. There is also a similar strategy using the combination of lightning lure and tripwire.

15 feet of fore movement is a decent way to get your party members out of danger. There are multiple ways to use the Lightning Lure. First, you can use it on a party member to pull him away from an enemy or a trap about to go off. Second, you can use the lightning lure to pull the enemy away from your frontlines if he is causing too much damage.

Is your enemy afraid of your party or trying to make his grand escape? Lightning Lure is excellent for messing with the movement action of the enemy when they are trying to get out of the fight. However, remember that you must be close to the fight, as the range is only 15 feet long.

Pulling creatures in an AOE

Is your wizard preparing a massive AOE spell, or is an avalanche of rocks coming down? use your lightning lure to pull them inside that area of effect. Whether the monster is a Guard Drake or a Peryton, they won’t enjoy getting pulled straight into danger. However, the range is a bit of a problem here. You need to be within 15 feet of the enemy and where the action is going on, which is dangerous if you are playing as a wizard.

When making a new DnD character, choosing the best spells can be challenging. While Lightning Lure is not one of those, it is a lot of fun to use and pull off. However, while it scales with your level, it falls far short in power compared to later spells like summon greater demon, which some classes get access to.

If you are looking for a support spell, the lightning lure is a situational cantrip that might have some use. However, there is much better, underused support magic like intellect fortress if you are going for a more original built.

Lightning Lure is an okay spell. It is pretty helpful and only uses a verbal component. However, many cantrips are better, stronger, and more useful than this niche magic.

What is better: Lightning lure or Thorn Whip?

Thorn whip is a much better spell than lighting lure. While Lightning lure is an okay cantrip in some situations, thorn whip seems to be the superior spell in most cases. The main problem with a lightning lure is it’s short-range, which Thorn Whip fixes. However, the lightning lure does have the STR check going for it.

Lightning Lure does not provide an opportunity attack. The standard rule for opportunity attacks is that they only occur when a creature moves willingly into the range of one, not when it has been forced to do so.