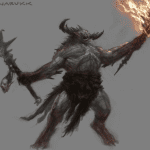 Dungeons and Dragons offers you a lot of choices when you are playing the game. Some bad, some good, some just straight overpowered. Knowing what the best demons to pick with summoning greater demons is a great way to get the most out of this spell and foil any plans your DM might have.

Here we will rank the summon greater demon spells best demons to conjure. Of course, we will give some extra info on why we made these picks. Check out these articles if you are interested in getting more allies to assist you in battle.

Summon Greater Demon is a 4th-level conjuration spell that allows you to conjure a demon from the chaos of the abyss. This demon can be challenge rating 5 or lower, and you have to pick a demon type.

You can also upcast the spell to make the demon you conjure stronger. For every spell slot above the 4th, you can increase the challenge rating of the demon you summon. For example, if you put the Summon Greater Demon in the 5th spell slot, you can conjure a 6th-level demon.

Ps: you can also summon lesser demons with this spell.

Here are a few Demons we think give the best utility for the spell slot and the overall situations you might find yourself in.

If you want to summon a greater demon that is a great all-around pick to help you out, then Barlugra is definitely amongst the best demons for Summon Greater Demon. You have reckless and three attacks to work with.

So if you can summon this demon at the spot where your opponent’s spellcasters and mages are, you can do some severe damage to them before the demon goes down or you lose control over it.

If your foes rely on concentration checks to work, Barlurga will severely damage these NPCs. However, thanks to the fact that Barlurga has a -1 in CHA, you can easily keep control of it.

Another great demon to conjure with Summon Greater Demon without having to upcast the spell is Tanarukk. Tanarukk is a powerful demon born out of an orcish fetus known for its power and strong melee attacks.

Tanarukk has a -1 modifier to its Charisma stat, so you can keep it under your control for longer. In addition, thanks to the ability to have an advantage on melee attacks to targets that have hit it first with a melee weapon, you can use it to take out the front lines of your foes.

Make sure you don’t underestimate this demon when it turns on you, as Tanarukk has a magic resistance.

Let’s look at the best demons for Summon Greater Demon 5e if you upcast it. In my opinion, Shoosuva is a fantastic pick if you want to get the most out of an upcast version of the magic.

Shoosuva is a greater demon with a Critical Rating of 8. This infernal Hyena-scorpion hybrid is high-speed and has two powerful attacks. One of these attacks can paralyze an enemy. So, you can make the battle a bit easier for you and your allies.

Thanks to the fact that Shoosuva has a -1 CHA stat, you can keep control of this ally a bit easier.

Sometimes you need a weaker demon that has some utility for the right situation. Then, thanks to its at-will spells and weakening gaze, it can become a powerful ally if you need some extra magic power on your side.

Despite having just a CR of 4, Babau has a solid damage output, even more so when you are a creative player and know how to make the most out of Heat Metal, Fear, and Levitate in 5e DnD.

Just look out for its +1 charisma, which can land you in a heap of trouble as it is easy to lose control of a Babau.

Vrock is an entertaining monster to fight with, but not against. However, the Vrock has good control abilities and can fly. So you have an extra option and some significant damage output from the air.

Controlling a Vrock is pretty straightforward. You just use your screech when you come down from the air. This screech will stun the enemies, and then you can swoop in with your party – or just the Vrock – attacking your enemies.

Remember, since the Vrock is a CR 6 greater demon, you need to upcast the conjuration to a higher spell slot.

Draegloths are powerful four-armed demon death orges that are often the minion of drow priestesses. These monsters need to be upcast to summon but are one of the best demons for the Summon Greater Demon spell.

Draegloth is powerful, throws out a ton of high damage attacks, and can get the same innate spellcasting as drow. So they can use Faerie Fire and Darkness. Interestingly enough, these demons also gain a +5 to their stealth checks. Making them a powerful monster for ambushes on the level of Astral Stalkers.

An honorable mention goes to the Glabrezu demons. These are insanely powerful and can make four attacks in one turn. Moreover, they can use Power Word Stun once daily to stun their enemies.

The Glabrezu is the strongest demon you can summon with this spell. However, there is a reason why it is not number one on our list of best demons for Summon Greater Demon 5e. The Glabrezu has a +3 Charisma bonus. So keeping it under control is almost impossible. The only way to make it work is by summoning the demon behind enemy lines or having them trapped alongside it because you don’t want to deal with this foe, trust us.

You must upcast the spell to a level 8 spell slot to summon Glabrezu. Since this is the strongest demon you can summon with the highest CR rating, upcasting Summon Greater Demon to a level 9 or 10 spell slot is unnecessary.

There are a ton of great demons you can conjure by using Summon Greater Demon in 5e. Most of these deal a ton of damage and can tip the battle in your favor. But, generally speaking, there is no real need to upcast it as the greater demons you have access to right away are all pretty potent.

Remember that when you use this spell, you must consider the CHA bonus of the demon you are summoning. Therefore, you don’t want to summon a powerful greater demon that will cause more trouble than help.