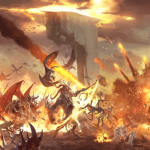 Being able to summon forth Demons is very useful in many different combat situations, especially if, for some reason, the party is going up against Celestial Beings that tend to be the mortal enemies of Demonkind. Using Summon Lesser Demon can be pretty helpful in such situations.

However, a player could not know what Demon they wish to summon through this spell, as there are many options for them to choose from. As such, this list will select a few that the spell can summon and offer them up as potential options.

Of course, this list is in no particular order of quality or usefulness. Still, it merely demonstrates some of the possibilities one can expect when using this spell to summon any demons within the Challenge Rating Restriction.

Make sure you also check out our list of the best greater demons you can summon to fight for you in DnD!

The Maw demon appears as its name states it is; A gigantic maw on legs, which is most likely able to devour anything into which it can sink its teeth. With this Fiend, not only is there a possibility to be able to eat the enemy targeted by this monster, but the Demon also has a ranged attack in the form of Disgorge.

By vomiting in a 15 ft. cube, anything caught in its range must make a Dex saving throw or take a massive amount of Acid damage from it, specifically 2d10 Acid Damage. By using this against a large number of weaker enemies whose health is under the 20 maximum damage output, the vomit attack can do.

It can be used as a definite form of crowd control, as any creature which fails the check is also knocked prone by the attack, forcing them to have to spend half of their movement to be able to stand back up again. Enemies who are prone give players who attack them via melee weapons an advantage to the roll, increasing their chances of hitting the target in question.

Like the Maw Demon that was previously mentioned, the Stench Kow is an excellent combat ally, mainly in handling crowd control. This is thanks to its primary combat feature that is always active while the Creature is alive; Its Stench.

If any creature other than another Stench Kow is within 5 feet of the animal, then there is a chance that the Creature could be poisoned until the start of the Kow’s next turn. Being given the Poisoned Status effect grants a disadvantage to attack rolls and ability checks made by the affected Creature.

Making it harder for them to be not only able to attack members of the party, but also be able to save themselves from certainly required ability checks that are needed to be passed to avoid damage taken from a spell of an additional status effect.

The damage output of the Kow itself isn’t the best, but this being can act as a debuff machine against the enemies within the combat encounter and makes it easier for the party to dispatch them.

Although this list is not in any specific order from best to worst, the Imp is the best option, simply due to what it can do and its speech capability. The Imp can shapeshift into a trio of unassuming beasts, specifically a Spider, a Rat, or a Raven.

A player can use this ability to have the Imp travel somewhere nearby and spy on a location as one of these three animals before returning and informing the caster of what exactly was seen by the Imp.

Not only that but there are uses that it has within combat as well. By having multiple of these little Imps, they can flood a single enemy and overwhelm them with their attacks. However, since the spell only allows for two of these Imps to be summoned, one would most likely have to upcast the spell to a higher level to be able to summon more and, in turn, make this use even more effective.

With its Invisibility and Magical Resistance to aid it in combat, a Caster could use the Imps to target any spellcasters that are too far away for the party themselves to deal with but would end up becoming perfect targets for the Imps to handle.

With how the Cackler seems to be made, it can be best used as an ally to flood the enemy and then deal a final bit of damage upon its death.

With its “Last Laugh” feature, the Cackler deals psychic damage against any creature within 10 feet of it upon its death and the failure of a Wisdom Save.

It can also use Mimicry to distract enemies by having them hear voices around them and confuse them about where the party is via these voices.

While the idea of a Demonic Chicken running into battle seems rather silly, this tiny beast is capable of something that few monsters are at its Challenge Rating: Multiattack. With each Chicken on the field, each can attack a single enemy twice.

This means if a group of these Chickens summoned by the spell charges and focuses on a single enemy. They can deal all kinds of damage through their techniques of overwhelming the target and causing a good amount of damage. In contrast, the party focuses on other, more difficult enemies.

Like the Abyssal Chicken, the Dretch can use Multiattack during its attack actions and thus utilize the same overwhelming techniques that the chicken can. However, the Dretch can also spawn a disgustingly green cloud within 10 feet of itself, poisoning anything that fails the Constitution Saving Throw required to roll.

When an enemy is poisoned in this way, the target can take either an action or a bonus action on its turn, not both, and can’t take reactions. This greatly limits what the affected Creature can do and helps the party out, as having a cripple enemy to go up against reduces the combat effectiveness of the enemy force by a considerable degree until the start of the Dretch’s next turn.

Everything up to this point has only been able to use the combat technique through a limited number of spawned creatures capable of spreading out and handling combatants themselves without any issues. The Manes, however, was purposely created to attack a single enemy and flood them with attacks.

Given they are only at a 1/8th Challenge Rating, the spell allows for more of them to be summoned without any real issue, meaning more attacks scratch and bite at the ankles of the enemies.

It has been apparent up to this point that the Demons capable of being summoned through this spell are incredibly capable of handling themselves in combat encounters in their own unique ways.

However, there are passive uses for these Demons. The Nupperibo is more than capable of dealing a considerable amount of damage during a combat encounter, but it can also be used as a tracker, though with a slight catch.

The Creature can only track creatures for 24 hours. Furthermore, it only tracks any creature affected by its “Cloud of Vermin” ability. This causes the Creature within 20 feet of the Nupperibo to take acid damage. It could even suffer a disadvantage to the Constitution Saving throw needed to avoid the damage if there is more than one of these creatures within its area.

Like the Imp, the Quasit can shapeshift into a trio of creatures that can be used for stealthy actions and otherwise spying on an area/being of the caster’s choosing. It also shares the same Magical Resistance and Invisibility as the Imp, making it just as useful in dealing with ranged combatants as the Imp is during any combat encounter the Creature happens to find themselves in when they are summoned via this spell.

However, the one thing that it has that is different from the Imp is the Scare Ability. This allows it to try and scare off any creature within a 20 ft range of the Creature, forcing them to make a Wisdom saving throw, or they will become frightened of the Creature for one minute.

Again, this can be used to direct the enemies in a direction that the caster may want them to go, even to the point of simply chasing them away and forcing them to flee from the battle.

While the physical combat capabilities of the Vargouille are rather lackluster, two things can really aid the party in the middle of a combat encounter: Stunning Shriek and Abyssal Curse.

Stunning Shriek causes any creature within 30 ft of it to hear a dreadful cry, and if they fail a wisdom check, they end up frightened of the Vargouille for one minute. When frightened in this way, the affected Creature is considered stunned, which gives party members an advantage on attack rolls made against this Creature, along with making them unable to move and automatically fail Strength and Dexterity saving throws.

As for Abyssal Curse, This targets an incapacitated creature and causes them to lose a point of Charisma after each hour passes, should they fail the Charisma check that is needed to be made, though not while the affected Creature is in sunlight.

All of the options listed within this piece are more than capable of handling themselves within a combat encounter in their unique way while also being able to deal with things outside of combat. However, given that these creatures are rather evil by nature, it is best to keep the majority of them in a combat encounter.

So then you do not end up catching the ire of any religious groups within the campaign by having these creatures simply follow one’s character around out of combat.