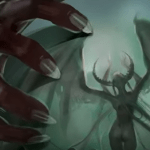 With all of the dangerous Monsters and enemies within a campaign and the world setting, some party members would want to have a sidekick to care for.

These sidekick are usually chosen for companionship, but some can be used for combat purposes, depending on the chosen animal or creature. The listed creatures would all most likely use their Monster Stat Blocks when they travel with the Party, though they would not be hostile towards them unless provoked.

Although the Gazer is a pseudo-beholder to some, the creature can be quite valuable for a noncombative situation.

Being able to mimic any language and voice it hears, similar to a parrot, can lure enemies away from certain areas or convince people to do things they would generally follow if told by a specific individual.

This creature can benefit Rogues and Bards, who would either use them to break into some restricted regions guarded by live beings or add them as part of their acts to use during shows to earn a little bit of extra coin.

At first, the idea of a Giant Toad being a traveling companion seems odd since they can’t be used as a mount, given how much they hop. However, they can technically be used in combat situations against creatures such as Goblins or monsters of a similar size.

Since the Giant Toad is about the same size as a normal humanoid, it is more than capable of being able to just latch its tongue onto a smaller creature than itself and swallowing them whole, and keeping them in its mouth until either the Toad dies or the creature it swallowed does.

The Thug is just as common as an enemy as the Bandit in terms of its purpose. However, with how strong the Thug can be, they can be quite a helpful combat buddy.

In addition, the Thug can speak Common to the Party, meaning that the Dungeon Master could build the world’s lore up a bit through this Thug talking about what he’s seen and what stories they’ve heard through their travels before meeting the Party.

Although many creatures are capable of flight that could work as sidekicks to the Party, the Giant Owl is the best option to go with compared to the rest. Not only is it a large enough Bird to be able to use as a Mount for traveling via flight, but it is also gifted with keen senses.

These keen senses give the Party an extra set of very good eyes to keep an eye out for any possible enemy creatures trying to sneak up on the Party. Finally, it has enough intelligence to understand complex commands and instructions that its keeper tells it.

This Giant Owl is more of a utility sidekick than a combat-based one, but it has enough Health and a high enough AC to hold its own during some encounters.

This small horror of a bird is in a similar ballpark to the Giant Frog and the Gazer, as it’s more of a gimmick pet that is more useful outside of combat than it is within a combat encounter.

Although it does not have this ability in the published stat block of the Cockatrice, the creature is known to be able to turn things to stone via its gaze, meaning a Dungeon Master could rule in the same way and have this small pest of a companion be able to do just that.

Of course, whether things turned to stone would remain like that permanently or if it would be temporary would be up to the Dungeon Master. However, it would still be neat to see it happen and use it as a badass way of killing off a tough boss or even the BBEG of the Campaign.

In terms of the Kobold, this could easily be a GPC that the Dungeon Master makes through a proper character sheet instead of using the Monster Stat Block from the Monsters of the Multiverse Published Media.

However, whichever method the Dungeon Master chooses to have this creature added to the Party. It could act as a humble guide, helping the Party through their hardware issues, or as a complete jerk who puts more faith in his devices than he does in anything else past his own life.

The possibilities with personality types with this companion are quite extensive for a Dungeon Master to be able to use.

These Humanoid Monsters embody the Invisible Man, as they are permanently invisible due to their very nature within the Prime Material and the Shadowfell itself.

However, should the Party encounter any children, they will be able to see the Skulk. Furthermore, as long as the child is under ten years old, dimly lit candles and reflective surfaces like mirrors can also expose its true form to a visible nature.

Either way, these creatures can get themselves into unseen areas and act as spies for the Party, relaying information via notes or some other form of magical communication, as they cannot speak Common themselves due to a lack of a mouth.

The Flying Sword could be a very interesting companion, as a Dungeon Master could coordinate with a player to have one of their weapons be this flying Sword, acting on its behalf during combat.

The Sword can deal decent amounts of damage without making it a preowned item from the Player’s inventory, but they can choose to do so if they want a more personal connection with the item. If they want, they can even improve the damage of the Flying Sword like a real blade, making it an even bigger threat in combat. They are also an interesting favoured combat encounter.

Many different types of Kou-Toa monsters exist as stat blocks, so for this part of the list, we will mainly focus on the base Kou-Toa instead of any other types.

These creatures, coming straight out of the works of H.P Lovecraft, have a balance between usefulness in a combat encounter and usefulness outside of one. Outside the battles, the Kou-Toa can sense creatures that would otherwise be invisible or moving about on the Ethereal Plane of Existence, making them excellent scouts.

Their greatest ability, however, is the innate and almost unnatural power that a Dungeon Master can grant them. Similar to how Orks function within Warhammer 40k, the Kou-Toa are capable of taking their faith and creating god-like beings out of whatever they believe in, regardless of what the item is; If they believe in it, it can become a god.

So, if a Dungeon Master decides to allow the Party’s Kou-Toa to be able to do such a thing, they can have all kinds of creative monsters wander the world to either bring law and order or death and destruction in their mindless wakes.

These Tiny little Fey creatures are quite adorable companions for when the Party is out on the road and could easily be used as an excuse to travel from the Prime Material to the Feywild.

However, these Pixies are surprisingly strong spellcasters, capable of using things like Dispell Magic, Polymorph, and Phantasmal Force as a part of their innate spellcasting ability.

With spells like these, the Pixie could function as a supporting combatant for the Party, giving them help from the sidelines to help debuff and hinder enemies and their spell attacks during a combat encounter. Pseudodragon familaiars are also a great option for these!

This Shapeshifting Jackal Hybrid is quite broken in terms of combat capabilities and would be dangerous to give the Party as a permanent traveling companion.

The Jackalwere is completely immune to all nonmagical attacks unless the weapon is made of Silver, making this monster a one-man army against other creatures that aren’t prepared for such a battle.

The only real way a party would have one of these as a part of the Party is if it was either nerfed to be on an equal fighting level with the Party or it was wounded and was thus worth less in a fight than a standard one.

The Star Spawn Grue is in a similar area of Overpoweringly Broken Companion as the previous entry into this list. While it is not strong in direct combat, its shrieks are capable of causing any creature within 20 feet of it that is not an Abberation to have a disadvantage for saving throws.

Moreover, attack rolls are made on other creatures besides a Star Spawn Grue. This paints a target on the Grue’s back, as hostile forces want to kill this creature as quickly as possible. The fact that it can’t understand Common makes it more of a guard dog with a nasty bark than anything else.

Although the Creatures mentioned above are all good choices to be able to have in the Party as a sidekick, having such an option could have its own rules and regulations that are decided upon by the Dungeon Master.

So, if you as a Player want a sidekick, it is best to clear things up with the Dungeon Master first to ensure that having the creature want as a sidekick is even possible within the realm you are playing in, let alone permitted to be done by a player.