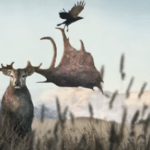 Many gentle creatures exist within the many different forests throughout any realm in Dungeons and Dragons. Some are highly common, such as squirrels, rabbits, or several different types of birds.

However, through all the different animals that could exist in such an area. One is held to a higher standing of importance; The Giant Elk, the subject of this article.

Contents hide
What are Giant Elk: attributes and description
Attributes
Giant Elk 5e description
Advantages and drawbacks of using Giant Elk encounters
Advantages
1. Higher than average Strength Score
2. Special Charging Attack
3. Capable of understanding languages
Disadvantages
1. An interesting situation
Best uses for Giant Elk 5e in a Campaign
A passive observer of history
A Boss in a Forest area
A wise telepathic sage
Advice and final thoughts
Giant Elk 5e FAQ
Why does the Giant Elk have its language?
Can the Hooves attack of Giant Elk be used on non-prone targets?
Would the Giant Elk make a good mount?
Related Posts:

What are Giant Elk: attributes and description

The majestic giant elk is rare to the point that its appearance is often taken as a foreshadowing of an important event, such as the birth of a king. Legends tell of gods that take the form of giant elk when visiting the Material Plane. Many cultures therefore believe that hunting these creatures invites divine wrath.

The Strength Score of the Giant Elk is at a solid score of 19, with a +4 Modifier given to match the strength score. With this, the Giant Elk’s attacks are more than capable of dealing more damage when they hit, along with having a better hit modifier when trying to make their attack.

This can be especially helpful when fighting against players or other enemies with higher ACs that require a larger roll to surpass and have a hit connect.

As a special action that the Elk can utilize, if the Elk moves at least 20 ft. out of the 40 total movement speed it has towards a target and then uses its ram attack on the same turn, then the Elk can add 2d6 damage to the attack.

Given how the normal attack for the ram is 2d6+4, this is effectively like a naturally accumulated critical roll (If the Dungeon Master decided on doubling dice for Criticals instead of doubling the damage total). Not only that, but if the target for this attack is a creature, they must roll a Strength Saving throw and succeed, or they will be knocked prone.

Being Knocked Prone in a combat encounter can be terrible, as it gives the attacking creature an advantage on their attack rolls against the prone creature. However, in terms of the Elk, knocking a target prone does allow for them to be able to use their Hooves to fight, which does a higher amount of damage in the form of 4d8+4 to be able to hurt its target even more than the charging ram possibly could.

As a passive boon, the Giant Elk being able to properly understand certain languages means that not only can a conversation be somewhat held between a person and the Giant Elk, but it can also understand commands given to it by an ally of theirs.

This can be especially useful if someone uses a spell that probes into the mind of the Elk, such as Detect Thoughts or Telepathy, even though it understands the languages but cannot speak them. That does not mean that the Giant Elk cannot think them as a means of communication. However, this is mainly up to the Dungeon Master, so do be sure to check with them to see if that is possible to do with a Giant Elk before doubling down on it.

To be quite honest, in regards to this creature, there are no major disadvantages to using the creature within a campaign, as it is well-rounded for combat and for passive situations, which will be explained in the next section. However, This is a rare situation, as most creatures do at least have one major disadvantage that would normally be discussed in this section.

Best uses for Giant Elk 5e in a Campaign

A passive observer of history

A part of the descriptor text on DnD Beyond explains that the Great Elk is rarely seen, to the point where its appearance usually occurs to foretell an important moment in history that has yet to occur, such as the birth of a new king.

It is also stated through this description text that the gods sometimes take the form of Great Elks when visiting the Material Plane, and to hunt them down is to invite the wrath of the divine.

The Dungeon Master controlling the campaign could decide to use the Giant Elk in this same manner, using them as passive observers of historical events that would hold great significance in the future.

A Boss in a Forest area

Despite the more passive uses of this creature, it is still capable of fighting against a party. With its above-average AC and Health Pool, the Giant Elk can go toe-to-toe with a party of at least level 8, maybe higher if the Dungeon Master wishes to.

The Giant Elk doesn’t have any features or abilities that aid other allies in its fights, but that doesn’t mean that it cannot hold its own during a combat encounter. Rather, having extra enemies for the party to battle while also fighting the Giant Elk could be seen as mere distractions from the boss rather than actual battle partners.

By having a player use Telepathy with the creature, a Dungeon Master could rule that the caster and the Giant Elk can communicate with one another.

In this light, the Giant Elk could easily fit the role of a sage, old and wise, as he has seen all kinds of events pass him by as he remained in his territory. But, of course, since the Giant Elk can’t physically speak these languages, only the Elk and the Caster would truly know what the other is saying through the telepathic bond.

Although the majority of the uses that had been written down in this article were more passive uses than combat-based ones, given their role within Dungeons and Dragons and the published media lore that surrounds them, it would make sense that a Dungeon Master would prefer to use them in more passive roleplay situations.

This doesn’t mean that the Giant Elk cannot be utilized in battle, though, as it is more than capable of handling itself when it needs to take part in a battle, regardless of the circumstances that got it involved in the first place.

Instead, I recommend adding it as an important story element for a small part of a campaign, especially if the end goal of a quest requires the party to find and speak with this Giant Elk.

Why does the Giant Elk have its language?

Since these creatures are rare to come across, either through finding one out in the wild or by summoning one via magic, It would make sense that such a rare species has its language to be able to communicate with the few Giant Elks that reside out and about the Material Plane.

Can the Hooves attack of Giant Elk be used on non-prone targets?

No, the target must be prone for the Hooves attack to be used. However, since it is fairly easy for the Giant Elk to set the Charging Ram attack up that could knock them prone, this isn’t that big of an issue.

Would the Giant Elk make a good mount?

Most definitely, yes. This can be especially true if it is an Elk that was found out in the wild that you have earned the creature’s trust to be able to use it in that manner.