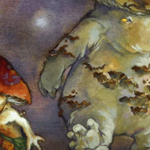 Throughout Dungeons and Dragons, many groups of tribesmen exist in varying sizes and shapes. These Tribals can be friendly or hostile towards humans, outsiders, or anything in general, depending on their actions and how the Dungeon Master rules how they act.

One species is considered tribal, depending on the Dungeon master running the campaign, but it can be used either as a tribal person or a wild creature; The Myconids. To clear up any confusion, this is the Stats and descriptions of the Myconid Adult creature.

Contents hide
What are Myconid 5e: attributes and description
Attributes
Advantages and drawbacks of Myconid encounters
Advantages
1. Large range for Darkvision
2. Better in numbers
3. Their attacks are capable of doing poison damage
4. The Capability to stun their foes
Disadvantages
1. Incredibly weak attacks
2. Sickness of the Sun
3. Spores that share Pain
Best uses for Myconids in a Campaign
A Fungal Horde
Target Practice
Support when one least expects it
Advice and final thoughts
Myconids 5e FAQ
Is there any stronger version of the Myconid?
Do the Myconids in 5e have to be hostile against players?
Related Posts:

What are Myconid 5e: attributes and description

Advantages and drawbacks of Myconid encounters

Since the Myconids are normally found in the Underdark, a pitch-black cave system deep underground, the Myconids can see through Darkvision to an astounding 120 feet. For context, most Dark-vision creatures are usually limited to 60 ft., so having it doubled gives them more chance to see any hostile creatures approaching.

Although this will be described later on as a major disadvantage depending on how a Dungeon Master rules on it, whenever a Myconid takes damage of any kind, any other Myconids within 240 feet can sense its Pain.

This Pain can act as a natural homing beacon, guiding any other Myconids over to where the hurt one was and dealing with the threat en masse. This can especially be difficult to handle given the nature of the Myconids promoting a large amount of them, given that they are essentially sentient fungi.

3. Their attacks are capable of doing poison damage

Although the attacks that the Myconids are limited to a mere 2d4, which will be touched on as a disadvantage later. The attack it deals out can also deal an additional 2d4 in poison damage against an enemy.

Although this doesn’t do much in the grand scheme of things, and it doesn’t issue out the poisoned condition to targets that had been hit, the Myconid could use every bit of damage it could get, so having the poison damage does help it a little bit more in combat.

4. The Capability to stun their foes

With the poor combat capability that the Myconids have, the most useful ability they have doesn’t properly do any damage but rather inflicts a condition upon those affected. Via the use of ejected spores, the Myconid can stun an enemy for one minute if they fail a DC 11 Constitution saving throw.

Having a Player Character be stunned means that they cannot take actions or reactions (see incapacitated), they cannot move, and automatically fail any strength or dexterity saving throws that they are required to make during the minute.

Not only that, but the affected person will also have attack rolls made against them roll with an advantage, giving any creature that attacks them. At the same time, they are stunned a much better chance of landing a hit and dealing damage toward them.

The Myconids only have one proper attack at their disposal that can deal actual damage; Their Fists. Unfortunately, these fists are incredibly weak, as they only deal 4d4 damage across the board (2d4 bludgeoning, 2d4 poison).

This means that a Myconid on its own, or a small group of them, would be a cakewalk for any party to deal with.

2. Sickness of the Sun

Thanks to their nature and environment, the Myconids are not fans of sunlight. Therefore, the Myconid will have a disadvantage in ability checks, attack rolls, and saving throws when exposed to it. This does give the Party an easy way to nerf the Myconid during a combat encounter, but there is one final issue with this sickness.

It’s lethal. If the Myconid remains in sunlight for more than an hour, then the Myconid simply dies from the exposure. This can be used as a surefire way for a party to end a combat encounter early, as the Myconids will most likely be fearful of the sunlight unless they are determined to hunt down and kill the members of the Party.

As mentioned before in the previous section, whenever a Myconid takes damage, any other Myconids within 240 feet of the injured Myconid will be able to sense their Pain. This has already been explained as an advantage above, but those reading this article must also wonder why this is a disadvantage.

Well, depending on the interpretation of the Dungeon master when utilizing these creatures, rather than coming to the aid of the injured Myconid, a party could keep hurting one and eventually cause enough Pain to cause others to die from the shock as well. But, again, this is just a negative solely dependent on the Dungeon Master’s understanding of the feature.

Best uses for Myconids in a Campaign

Since the creatures are so weak on their own, the best way to use these creatures to properly make a combat encounter with them become serious is with large numbers of their kind.

In this instance, large numbers could be well over a hundred sent in to be attacked and destroyed by the Party. Still, even they would possibly get overwhelmed, and some would be able to fit through the cracks of the Party’s defense and try and get some attacks in. So although 100 isn’t the best number to go for, a number past 10 would be enough to make the Myconids worth using on their own.

On the opposite side of the coin, Myconids can be used as excellent target practice, given their weakness. With their Low Armor Class, Health Pool, and low Damage output, the Myconids can allow the players in a party to test out any new spells or loot in combat without being at any serious risk.

Support when one least expects it

With the Myconids being as weak as they are, they could be shown as more of a support monster than a directly engaged combat entity, especially when paired up with creatures meant to deal decent amounts of damage. As such, using their stunning spores, they can give their allies a chance to deal attacks against a target with an advantage, making the easy players targets for their aggression.

The Myconids are not a species worth using in a campaign unless the Party is specifically going to the Underdark for one reason or another. Even then, the Myconids are too easy of an enemy to truly consider for any major combat encounters, save for being used as support units during the battle.

The only other time they could be a real threat against any party that happens to go toe to toe with them is if they have many combatants to overwhelm the Party and at least get some attacks in. Otherwise, just have them at miniature target practice for new abilities for the players, or just don’t use them.

Is there any stronger version of the Myconid?

Within the realms of Published Material, there is only one other type of Myconid that is stronger than the one that was just written about; the Myconid Sovereign. The stats are similar to a degree, with a few more support features and abilities at their disposal.

Do the Myconids in 5e have to be hostile against players?

Not at all; A Dungeon Master can use the Myconids as mini allies or neutral townsfolk that need the help of the Party. Again, although they are set up to be monsters encountered during combat encounters, the Myconids can be used for passive, story-telling purposes.