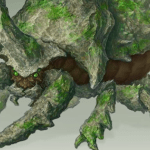 Few creatures can survive within the hot, desolate conditions of a desert, wherever the desert may happen to be. However, the animals that survive there have evolved and adapted their physical body and behaviors to survive in harsh environments.

One such creature is one of the first animals that come to mind whenever another person mentions animals in the desert; The Scorpion. Therefore, this article will focus on the Giant Scorpion, which can be just as deadly, if not more so, than its standard-sized brother.

What are Giant Scorpions in 5e dnd: attributes and description

1. The Scorpion is capable of multiattacking

During any combat encounter in which the Giant Scorpion finds itself, the Scorpion can utilize multiple attacks via multiattack. Normally, this simply pertains to just any three melee attacks that the Giant Scorpion may have, but the specifications of the feature state that it can make two attacks with its claws and one with its Stinger.

Although the added benefits of the Claws and Stinger will be discussed later in the article, having a higher chance of achieving those benefits and a higher chance to damage an enemy creature overall means that more damage can be produced during a single one of the Scorpion’s turns.

2. The Stinger Stings, and the Claws…Claw?

As mentioned before, there are additional benefits that the Scorpion has from its two melee attacks that are activated upon a successful hit. The Claws can grapple up to two targets, one in each claw, upon a successful hit made by them, with a DC 12 Strength Check needing to be made to be able to escape from it.

This means that the creature or creatures caught by the claws cannot move, and they cannot take any actions or reactions, turning whichever creature was caught into a sitting duck. On the other hand, the Stinger is a great deal more dangerous than the claws.

The Stinger is capable of dealing additional Poison Damage, which can be halved if the target passes a DC 12 Constitution Saving Throw. This added damage can cause some hurt against a target, especially if it’s a player who was brought to a considerably low hit point range from the attacks made by the claws or by the piercing damage made by the Stinger.

Despite having only a Challenge Rating of 3, the Giant Scorpion has a rather high Armor Class and Health Pool to work with. This makes it a considerable foe to go up against and easily a very hard fight for lower leveled players to try and fight in a combat encounter. Not only because of the high AC making it more difficult to hit, but also the high health pool allowing it to take several attacks that properly hit the Scorpion.

Although this is a given, based on what the Giant Scorpion is, the Intelligence and Charisma scores for the creature are shockingly low, Set to a staggering 1 and 3, respectively.

These low scores put their modifiers within the negatives, -5 and -4. This makes it incredibly difficult for the Giant Scorpion to succeed in spell-saving throws that are made to combat spells such as Dominate Monster, Charm Monster, or Divine Word, if not nearly impossible to do so.

Thanks to a Wisdow Score of 9, the Passive Perception of the Giant Scorpion is also the same number, giving it a poor amount of visibility. In effect, this means that the monster could easily be snuck past by the Party without it even being the wiser to it being within its area, let alone walking right next to it.

Although incredibly good for the Players, a DM could be upset that a combat encounter was bypassed, even if it was so unaware of its extended surroundings that it will miss most creatures, save for the most clumsy players.

Best uses for Giant Scorpions in a Campaign

Given the AC and the Health pool that the Giant Scorpion has, putting this creature up against a low-level party would most definitely cause a TPK if the Dungeon Master is not careful.

So, as a more suitable option, the Giant Scorpion could be utilized as a boss fight for a party of characters that have reached at least level 8, possibly up to level 10, if a few minions are thrown into the boss fight. This way, the Party can experience the creature without it seeming as a possibly unfair hurdle if it was given to them at too low of a level to be able to fight it properly.

A tamed mount for a desert portion of a campaign

While other, more docile creatures can be used for this purpose, a Dungeon Master could use the Giant Scorpion as a passive, domesticated creature. Additionally, this could be used to explain the lore of an area.

However, this would be a homebrewed area, as there aren’t any areas within Published Media that utilized Giant Scorpions as modes of transportation across their deserts.

When mixed in with a group of enemies, the Scorpion could function as a distraction for at least two players, as it could grapple up to two of them and attack them with the Stinger.

This double focus could even draw the attention of a third player who would attempt to help the pair of player characters grappled by the Scorpion’s claws to get out of them and rejoin the fight properly. In addition, such a distraction could give the other monsters in the combat encounter a chance to overwhelm the other players, adding more pressure to the grappled PCs by attacking them instead.

The Giant Scorpion is a monster that I would recommend adding if a part of the campaign would take place within a Desert biome. Such a creature could prove to be a match to a party at a certain level, or the very least, be a very dangerous distractor while other Monsters come up and attack the Party from a different direction.

Either way, it would be a fun monster for a Dungeon Master to include in their campaign for both the Dungeon Master themselves and the members of the Party to experience.

Are there any spells that could be properly paired with the Giant Scorpion Stat Block?

Yes, there is; The Guardian of Nature spell that Druids and Rangers have access to upon reaching the capabilities of casting 4th-level spells. One of the two options, Primal Beast, does not mention what type of animal the creature has to be, so the caster of that spell could very easily use a Giant Scorpion as the form it takes for the transformation.

Why does the Giant Scorpion have Blindsight?

Blindsight allows the Giant Scorpion to sense the area around it without being able to see. As such, the Scorpion needs this as in the real world, despite their large number of eyes, their eyesight is incredibly poor. Like this, the Giant Scorpion would have this same problem and rely more on Blindsense.

Is it possible to have the Scorpion as a permanent mount?

If the Dungeon master has allowed it and/or has shown the Giant Scorpions being tamed in the past events of their campaign, then yes, they can. If the DM keeps strictly published material and rules, then no, they cannot. The answer is strictly up to the DM.