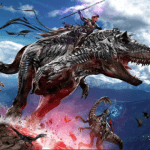 Although many different types of creatures reside in any of the Planes of Existence, the dinosaurs seem to exist within Dungeons and Dragons. These creatures from Earth’s ancient past have managed to find their way into Dungeons and Dragons, and one such Dinosaur will be the main subject of this article: the Quetzalcoatlus.

What are Quetzalcoatlus: attributes and description

Advantages and drawbacks of Quetzalcoatlus encounters

As shown in the attributes section of the article, the Quetzalcoatlus can move 80 ft. per round, making it an incredibly difficult target to hit while it is in the air.

In addition, there are other bonuses to this flight speed pertaining to its attack and a special action that it can take concerning its flight capabilities, all of which will be discussed later in this section.

2. Can do extra damage from a pseudo-kamikaze fight path

Although the title is a rather couth one, its usage will make sense as you read this portion further. Suppose the Quetzalcoatlus can fly at least 30 ft towards a single target just before it uses its bite attack action. In that case, the attack will deal an additional 3d6 piercing damage that will be added alongside the normal 3d6+2 damage the attack on its own.

With this ability in mind, meaning that through an aerial charge, the Quetzalcoatlus can effectively make whatever attack it will make on said target a critical hit, doubling the dice that are rolled for the actual damage. Of course, this depends on the players getting hit during the attack.

3. Is unable to trigger an attack of opportunity from a player

Thanks to its “Flyby” feature, the Quetzalcoatlus does not trigger any attacks of opportunity whenever it flies out of the reach of an attacker. This means that the creature can remain far away from the party until it needs to strike, upon which there will be a single round window for those who are within melee striking distance to be able to hit them.

Despite its impressive movement speed when flying, the Quetzalcoatlus’ movement speed is drastically reduced upon landing, going from the 80 ft. discussed earlier in the article to a measly 10 ft. This can give any player capable of getting close enough to where the creature had landed a chance to strike at it and damage it.

Like many creatures in the “Beast Classification,” the creature is more easily controlled through Dominate Monster or Charm Monster, especially with its laughable Intelligence Ability Score of 2, which gives the creature an Intelligence Modifier of -4.

Unfortunately, its Charisma score is no better, sitting at a measly five or a -3 for the modifier. Nevertheless, this can give the players of the party a way to stabilize it and perhaps even tame it if the Dungeon Master allows for it.

Best uses for a Quetzalcoatlus in a Campaign

If the Dungeon Master allows for the taming and overall control of the Quetzalcoatlus, then the party can use it as a mount for their adventures. With how massive the creature is, it could hold a decent amount of gear, along with a person or two, and still be able to fly normally.

Of course, if the party comes across more than one, they would have to consult with the Dungeon Master once more to see if they can get more of these Quetzalcoatlus to use them as large mounts for ease of travel from place to place.

Sometimes players or other DnD enthusiasts will not know that out of the large repertoire for Dungeons and Dragons monsters that can be used in a campaign. For example, dinosaurs are an option that the Dungeon Master can place down at any point.

As such, it’d be best for the DM to have the first encounter with a Dinosaur be a combat encounter. Even more so if the DM had set up the build-up for the fight correctly, such as noises from the Dinos being heard in the dense woods, or an abandoned mineshaft with freshly eaten corpses picked to the bone.

Despite the passive option that can be chosen for the Quetzalcoatlus, the best use for it is through combat encounters. As such, one type of encounter is if the party encounters one of these creatures alone and it starts a fight with them.

Its fast movement speed and dive-bombing beak attack make it highly dangerous to fight, though it will still have to land at some point. It does have a decent amount of HP and a fairly average Armor Class for the creature at hand, but that shouldn’t be a major deterrent against a party focused on fighting.

Keeping to the idea of the creature being used as a mount, certain Hostile NPCs can utilize weapons better suited for mounted combat, such as polearms and javelins. With that, the Quetzalcoatlus became even more dangerous, as it would now have a rider on its back that tamed it into going wherever the rider wished to go.

So, for a player, the best way to handle the duo would be to take out the pilot, simply because it could throw the creature into temporary disarray when it loses its rider and master.

The Quetzalcoatlus is a great way to be able to introduce the many different Dinosaurs that are available for any dungeon master to be able to include in their campaign. Additionally, it has a perfect fit AC and Health pool that a mid-level party can handle, along with its versatility as a mount.

As such, if a Dungeon Master is thinking about using the Quetzalcoatlus as the first Dinosaur that the party comes across during their travels, it would be best advised to look at all the others first before deciding, just to give the DM a good idea of how many there are and if he cares to find one that might be less intimidating to players than the creature.

Can these Quetzalcoatluses be used in major-scale battles?

If the Dungeon Master allows such a thing to happen, the Quetzalcoatlus could be ridden into battle like a proper mount, though there is a good chance it may get fired upon since its 30 ft. wingspan does not do much to conceal its position in the sky.

Why does the Quetzalcoatlus move so slowly on the ground than in the air?

Well, since this Quetzalcoatlus mostly spends its time flying, and it was evolved to be able to do so, the Quetzalcoatlus moves super slow on the ground because of its size and the wing span it has to close up when it lands.