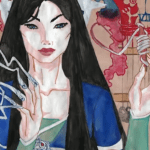 Often used for trickery, Major Image can be used by almost any spellcaster to create a realistic image of an object, creature, or event within 120 feet of range. As long as the image is no bigger than a 20-foot cube, the caster can also control the image to move as naturally as the caster wants or even carry on a conversation.

Contents hide
What is Major Image 5e: Mechanics and Requirements
Attributes
Major Image Description
Advantages and Drawbacks
Advantages
Disadvantages
Best Uses for Major Image 5e
1. Create a Scenery
2. Fear
3. Convince/Manipulate
4. Gather Intel
5. Distract
Advice and Final Thoughts
Major Image FAQ
Do I have to see my Major Image to move it?
Can Major Image 5e create light sources?
Are there exceptions to Major Image only creating one image?
Can I kill a Major Image?
Related Posts:

What is Major Image 5e: Mechanics and Requirements

You create the image of an object, a creature, or some other visible phenomenon that is no larger than a 20-foot cube. The image appears at a spot that you can see within range and lasts for the duration. It seems completely real, including sounds, smells, and temperature appropriate to the thing depicted.

You can’t create sufficient heat or cold to cause damage, a sound loud enough to deal thunder damage or deafen a creature, or a smell that might sicken a creature (like a troglodyte’s stench). As long as you are within range of the illusion, you can use your action to cause the image to move to any other spot within range. As the image changes location, you can alter its appearance so that its movements appear natural for the image.

Physical interaction with the image reveals it to be an illusion, because things can pass through it. If a creature discerns the illusion for what it is, the creature can see through the image, and its other sensory qualities become faint to the creature.

At Higher Levels: When you cast this spell using a spell slot of 6th level or higher, the spell lasts until dispelled, without requiring your Concentration.

The most common use for Major Image is to give the illusion to other people of something that is not there. If used enough with level 6+ spells, the caster can create an entirely illusionary scenery.

For example, they can make an empty house look like creatures, furniture, etc inhabit it. Of course, all of them will be illusions.

Evil spellcasters can cast the image of dangerous monsters to wreak havoc and fear in villages. Another common use to instill fear: setting illusionary fire to buildings. Major Image can also replicate the image of spells to make themselves look stronger than they are.

For example, Whirlwind 5e is a level 7 spell that low-level spellcasters cannot use. However, if they are convincing enough, a person wouldn’t want to fight someone much more powerful than them.

Although it may be arguably immoral, casters may also use Major Image to manipulate others into doing their bidding. For example, many DMs and players have had people use Major Image to create the illusion of a player’s loved one to convince either to stop fighting.

Furthermore, since Major Image can have the illusion hold complete conversations, the caster can also have the image convince a stubborn noble by creating a Major Image of another fellow noble.

Similar to convincing and manipulating, the caster of Major Image can create a creature/person to infiltrate enemy grounds. The Major Image can be something small that speaks Common or a simple person that would attend the enemy event. As long as the caster stays within the range, the illusion can gather intel and report whatever they learned to the caster.

Casters like to also use Major Image as a distraction in caves or dungeons infested with monsters. Since the image can also create realistic sounds to mimic themselves.

They can clone themselves and have them make sounds elsewhere to make the monsters swarm toward the image, giving the party a way past the creatures. This tactic can also be used against guards.

Many combat-loving players don’t see much of a point in this spell but will easily get around once they discover the many uses and how it’s limited only to size and creativity.

To make it, so people don’t do an Investigation check or make physical contact with the spell, it would be best to have the image inherit some good charisma or people skills. The more detail and intricate the image, the better, unless it’s for a task such as distracting.

Roleplayers and world builders love to abuse this spell almost as much as DMs due to the sheer chaos and ridiculousness people can create within a 20-foot cube. Major Image can tell a lot about what kind of player the caster is- are they flashy? Maybe they like things that are simple and efficient. It all depends on what their mind can think of.

Do I have to see my Major Image to move it?

This question is quite controversial among DMs, so it’s usually the DM’s discretion on whether or not this rule is implemented into the spell. However, it is common belief since the rulebook does not specify whether or not the caster needs to see it.

Most DMs believe that as long as the caster is within range, the image should be able to move as the caster pleases. Furthermore, most DMs prefer it this way since it gives the caster more wiggle room to play around with the spell.

When in doubt, though, ask your DM. Some DM rules differ from others.

No. Since the major image is a glamor/figment, it cannot create actual light, just as it can’t create sufficient heat, cold, or thunder/lightning damage. It can, however, create darkness.

Are there exceptions to Major Image only creating one image?

Once again, this is mostly at the DM’s discretion. However, it is agreed upon that swarms of creatures like insects, rats, etc., can be created since it’s considered a “visible phenomenon”.

Can I kill a Major Image?

No. The only way for a Major Image to disperse or disappear is for the caster to be out of range or for the caster to dispel the illusion. If anything or anyone is to attack the image, the attack will pass straight through it as if nothing happened.