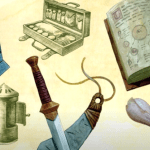 When someone is crafting items that could be useful for the party down the line, one major part of it is…well, the parts needed to create the objects. Unfortunately, some of these can be difficult to fabricate due to the material requiring a significant amount of time or simply a complex process.

Someone could learn how to make these materials the old-fashioned way and adequately build the thing the party requires, or they could take the raw materials and use their magic to build what they need quickly. Introducing the Fabricate spell, our topic for this article; One man’s wood is another caster’s bridge.

Contents hide
What is Fabricate 5e: mechanics and requirements
Attributes
Spell description
Advantages and drawbacks
Advantages
Disadvantages
Best uses for Fabricate 5e
1. Creating Barricades or other Defences
2. Constructing pathways for natural pitfalls
3. Building housing for oneself to reside in
4. Repairing damage to an existing structure
5. Building arms or armor for allies to use
Advice and final thoughts
Fabricate Spell FAQ
Can someone cook food with Fabricate 5e?
Can Fabricate 5e break down existing items into smaller, more easily transportable objects?
Do the forms that the items take to remain as permanent changes when made with Fabricate 5e?
Related Posts:

What is Fabricate 5e: mechanics and requirements

You convert raw materials into products of the same material. For example, you can fabricate a wooden bridge from a clump of trees, a rope from a patch of hemp, and clothes from flax or wool.

Choose raw materials that you can see within range. You can fabricate a Large or smaller object (contained within a 10-foot cube, or eight connected 5-foot cubes), given a sufficient quantity of raw material. If you are working with metal, stone, or another mineral substance, however, the fabricated object can be no larger than Medium (contained within a single 5-foot cube). The quality of objects made by the spell is commensurate with the quality of the raw materials.

Creatures or magic items can’t be created or transmuted by this spell. You also can’t use it to create items that ordinarily require a high degree of craftsmanship, such as jewelry, weapons, glass, or armor, unless you have proficiency with the type of artisan’s tools used to craft such objects.

When creating the item needed using this spell, the item can be up to a Large Scale in size or a 10 by 10 by 10 ft sized object. This pretty much means things such as tables, doors, and even barricades are within the realm of possibility of creation. Of course, this has limitations, which will be discussed later. Still, if someone has the proper amount of raw materials, someone could make many valuable objects with this spell and the materials utilized.

Although the spell requires the raw materials for whatever it is the caster wishes to make utilizing the spell, the actual spell itself does not need a physical material to be cast; simply a vocal and somatic component.

This gives the caster more chances to cast the spell and utilize it without worrying about any physical material running out and stopping them from casting it. Again, the spell needs the raw materials for it to work, but this changes the idem the caster wishes to make.

If a Cleric has taken the Forge Domain path of their Archetype, they can use this spell once they reach Level 7. Not only does this spell mix well with their modification of Channel Divinity and their Blessing of the Forge, but also their gain proficiency with both heavy armor and smith’s tools.

Although the reasoning behind why the smith tool’s proficiency works here will be described later, giving the Cleric a separate support path they can take to help their party is always one that many players welcome.

Although this spell can be used to make many things, there are some limitations. Fabricate 5e spell cannot create items that require a high degree of craftsmanship to create the item the caster has in mind. This could range from Jewelry and Glass, all the way to Weaponry and Armor, though there is a slight clause to this downside.

Although the normal size of the spell is a ten by ten by 10 ft cube, that is mainly with other materials such as Wood or Cloth. If utilizing Stone, Metal, or some other form of a mineral substance, then the size of the item is reduced to a Medium size or a 5 ft cube.

This means that although you can construct things with a stronger material than that Cloth or wood, the caster would have to think on a smaller scale for whatever item they want.

1. Creating Barricades or other Defences

Regardless of the material used for the project, except for Cloth, the caster can create several defensive structures to defend a particular location or building. They can create traps made of these materials, entire barricades that prevent enemy forces from climbing on top of them.

You can also create chokepoints for allied forces to be able to kill enemies quicker than if they flood into a wider area. Overall, this use is mainly for preparations before an upcoming battle.

While this seems like a no-brainer in thinking about how someone could utilize the spell, it does make sense. For example, if a significant pitfall exists in the wilds, such as a strong river or a deep gorge, there should be a method of crossing it unharmed.

Sometimes though, these pathways are either nonexistent or too unstable to be safely crossed without breaking under the weight of those trying to use them. With Fabricate, the caster could produce a new pathway across such a pitfall or simply restore the old one to a more stable condition.

3. Building housing for oneself to reside in

Another no-brainer, but when a party is playing in a campaign, a significant question that will come up is where that party could rest for either an evening or have it be a base of operations for their adventures.

The caster could use this spell to build themselves and/or the party such accommodations, though the building itself would either be relatively small or be built piece by piece to build a bigger structure.

4. Repairing damage to an existing structure

This one is more regarding a disaster or aftermath of some form of destructive power that the party could be a part of or simply stumble across. When such things occur, houses and other buildings around an area can easily be damaged or even destroyed, resulting in much-needed reconstruction.

Someone with the Fabricate Spell, piece by piece, could assist in the reconstruction by using the raw materials to replace the portions of a building that are missing back in their proper place. This could also be done to repair damaged furniture during an incident, such as a bar fight or a siege on a city.

5. Building arms or armor for allies to use

Although this would require someone to be proficient in Smith’s Tools, such as an Artificer or a Cleric using the Forge Domain, a spellcaster with the spell could take metal nearby and make it unenchanted equipment that their party could use as a part of their equipment.

That way, if someone needs a shield, a piece of armor, or a weapon that they are proficient in, they could turn to the spell caster and simply ask for such an item, so long as they have the raw materials to do so.

Through many of the different uses for this spell, the Fabricate spell has many more. As such, it is best that someone who takes this spell into their spell list not only understands the humongous scale of things that can be created with Fabricate 5e.

Fabricate also has the uses of these items can be created with both inside and outside-the-box thinking. This spell is one I would highly recommend taking into one’s list, and I would use it as often as a person can to completely maximize the sheer amount of things someone can do with this spell.

Can someone cook food with Fabricate 5e?

The answer to this depends on the Dungeon Master, but as the spell is written, creatures cannot be transmuted with this spell.
So effectively, the Pig would not be unable to be changed into anything, though, as already stated, a Dungeon Master could allow it if the Pig was already dead and the caster had proficiency with Cook’s Utensils.

Fabricate 5e can be used for such a thing. Though the Dungeon Master of a campaign could say otherwise, depending on the item, the caster wishes to transmute into a smaller form for easier movement.

Do the forms that the items take to remain as permanent changes when made with Fabricate 5e?

The raw materials remain in the new form, regardless of what they were used to make or how much of it was used. This doesn’t mean that someone could break down the same object back into the raw materials again, but this does mean that the item doesn’t change back on its own.