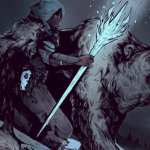 Artificers are one of the least played classic classes in 5e DnD. They aren’t all that beginner-friendly, and only an experienced player gets the most out of them. So our experienced in-house DM decided to write this article and help you pick the best race for an artificer in 5e DnD!

Here are the criteria we have used for the list:

Top 12 races to use for an artificer in 5e DnD

Artificers strongly rely on their intelligence to be effective. Therefore, races that give you a decent bonus in that stat will always get a slight edge. There are also things like the possible subclasses to consider and what bonuses you get in tool proficiencies.

There is also a distinction to be made between Artificers that are frontliners and need an excellent way to soak up damage and deal with status conditions, and backliners, that rely on long-range attacks and stay out of the fight.

Rock Gnomes are my favorite race for artificers in 5e. I am pretty sure a lot of players and DM’s will agree and some will disagree that this is the best race, but saying they are in the top five is not controversial at all.

The Rock Gnome has a lot of great things going for them. They get the INT bonus you need, and you get the Gnome’s Tinker trait, allowing you to do Magical Tinkering easily. Roleplaying with an artificer Rock Gnome is pretty easy as well, and there is a ton of art around these kinds of characters to draw inspiration from.

Now is your chance if you ever want to roleplay as a Genasi. The Earth Genasi are one of the best races for Artificers in 5e. Even more so, if you are planning on making an Armored Artificer with a huge stealth bonus, thanks to the fact you have Pass Without a Trace, you can slip by almost everywhere.

If you are a low DEX artificer, you get to have stuff like Blade Ward to aid you in surviving the first few levels till you get Heavy Armor proficiency.

The Eladrin’s complete our top three for the best race for an Artificer in 5e DnD. These creatures have a good amount of perks that make them pretty fantastic as this class. You get to have the +2 INT bonus you want, and the race is pretty fun to play with, too, from a roleplaying perspective.

Since you don’t have Misty Step as an artificer, you need to compensate. Eladrin can use teleportation. Trance is a nice extra to have on your Artificer and gives you a nice amount of different options.

The High Elf is our first ‘classic’ DnD (sub)race on our list. So if you don’t want to go all too crazy with your roleplay, the High Elf is a fantastic option for you and a ton of fun to play with.

High Elves are a race that fit the Artificer brilliantly. They get the much-needed INT bonus and a dex bonus, and the fact that you get a wizard cantrip for free is excellent. High Elves are a great pick for newer players who want to play as an artificer. Unfortunately, my favorite Elf variant, the Wood Elf, is not a good pick for the Artificer.

No surprise here that the most versatile race in D&D, the Human Variant, makes it so high on a list like this. The Human variant is a safe but strong pick for your race pick if you are building an artificer.

The perks you get as a Human Variant speaks for themselves. You get a much-needed bonus to your Constitution and Intelligence stat and a free feat at level 1. This makes the early levels a lot easier.

The Human variant is also an excellent race for that class if you want to make a rogue.

The classic Hobgoblin does not just make a potent Warlock, but the race is great for an artificer, too, in 5e DnD. You get the exact ability score increases you want to have, and you also get – significantly underestimated – Darkvision ability. Hobgoblins also get access to 2 martial weapons straight after creating your character, and you also get Saving Face.

The Hobgoblin is not the best pick for every kind of Artificer, but if you are trying to make a Battlesmith, it is S-tier. You should strive to get Battle Ready as soon as possible. You also need a Rapier (or whip) until you get Battle Ready, so you do some decent damage.

The Tiefling gets a +2 Intelligence bonus and +1 Constitution, which is the ideal ability spread. In addition, the Winged Tiefling gets Darkvision and also beneficial fire resistance. The best variant of the Tieflings.

The Winged Tiefling gets flight for free, which is always a massive benefit in fighting, scouting, and traveling. In addition, you can fly in both light and medium armor. This fact helps you rely less on Dex and makes you soak damage much more straightforwardly.

Haven’t played with a Vedalken yet? Well if you want to make them shine at their best, then you need to play them as an Artificer. The default rules give you tremendous ability score increases and an advantage of 50%! Of your saving throws. You can also get a bonus in d4 checks with free proficiencies. These can be helpful tools that you use a lot.

The Vedalken are not the best race for an artificer in 5e, but they come close and are definitely a fantastic non-conventional option.

The Kobold is a great race pick for an Artificer. You can use them as a Battle Smith if you want to get the most out of it. Kobolds are pretty cool if you use the Classic version with a customized origin.

The Classic Customized Origin Kobol gets a +2 in their intelligent stat, Darkvision, and you can use Pack Tactics. The major disadvantage of playing as a Kobold is that they are sensitive to Sunlight. However, if you know, pack tactics can easily offset that disadvantage.

Both the Yuan-Ti in the Updated MMoM and Classic (customized Origin) make very strong Artificers. We will be focussing on the latter of the two here and explain why they are such a strong race for an artificer in 5e.

This kind of Yuan-Ti gets a +2 INT bonus, +1 CON bonus, and Darkvision. If that is not enough, you also get two resistances, poison and magic resistance. You also get some innate spellcasting which isn’t all that useful.

Infusions and spells that further boost your AC make the Yuan-Ti a great frontliner artificer. As a new player, you should have little difficulty in casual campaign picking this option.

The Owlin is a pretty good option for the Artificer and an extremely rare pick by players. If you want a unique pick that gives you a fun roleplaying experience, the Owling is a fun pick. You will need a good amount of Dex to make this build survivable enough to fight on both the front- and backlines of your party.

You can only use light armor, and you will thus need to fight at a range most of the time. However, if you combine this with Infiltrator Armor and Stealth proficiency, you have a decent build to work with albeit a tad fragile for an aggressive play style.

The Warforged is a great race for an artificer in 5e, even if it comes in last on this list of best picks. A couple of factors just make this pick versatile, fun, and pretty strong.

A warforged gets a good constitution, and you can also put a + in your intelligence. Thanks to the fact you also get resistance and a higher AC, you can fight on the frontline. If you further invest in your AC with infusions, you are almost impossible to take down. You get a high AC, and you have Flash of Genius and Absorb Elements.

If you are looking for the best race for an artificer, there isn’t a single best option. Instead, a lot depends on your playing style, what encounters you might see, and how experienced you are in combat situations.

Yet, a couple of options just make a better race for an Artificer. The best overall race for me is the Rock Gnome. The Human Variant is always a solid pick if you are looking for a safe option. If you want to pick a safe option, you can choose between the Yuan-Ti or the Warforged.

Did we miss something, or do you disagree with our list? Let us know, and we will check it out and maybe include your info on the list!