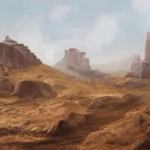 By now, those who have looked through these articles know of both Mold Earth and its aquatic cousin Shape Water. However, in this family tree of Elemental Control, there is a spell that many could consider being Mold Earth’s older, stronger brother; Move Earth.

This Article will look into what Move Earth can do, along with the differences between it and Mold Earth. Another spell similar to these ones is Erupting Earth, which we discussed already.

Contents hide
What is Move Earth 5e: mechanics and requirements
Attributes
Move Earth description
Advantages and drawbacks
Advantages
Disadvantages
Best uses for Move Earth 5e
Verdun’s Anniversary
The Wall of China
Land Slide
Advice and final thoughts
Move Earth 5e dnd FAQ
What could be considered the main, albeit simpler difference between Mold Earth and Move Earth?
Does the Terrain used during Move Earth return to what it was after the spell’s duration is over?
Could the Terrain formed by move earth be used to form a ramp that could make reaching certain areas easier?
Related Posts:

What is Move Earth 5e: mechanics and requirements

Choose an area of terrain no larger than 40 feet on a side within range. You can reshape dirt, sand, or clay in the area in any manner you choose for the duration. You can raise or lower the area’s elevation, create or fill in a trench, erect or flatten a wall, or form a pillar. The extent of any such changes can’t exceed half the area’s largest dimension. So, if you affect a 40-foot square, you can create a pillar up to 20 feet high, raise or lower the square’s elevation by up to 20 feet, dig a trench up to 20 feet deep, and so on. It takes 10 minutes for these changes to complete.

At the end of every 10 minutes you spend concentrating on the spell, you can choose a new area of terrain to affect.

Because the terrain’s transformation occurs slowly, creatures in the area can’t usually be trapped or injured by the ground’s movement.

This spell can’t manipulate natural stone or stone construction. Rocks and structures shift to accommodate the new terrain. If the way you shape the terrain would make a structure unstable, it might collapse.

Similarly, this spell doesn’t directly affect plant growth. The moved earth carries any plants along with it.

The effects that can be used for Move Earth are similar in nature to the spell of the almost same name, Mold Earth. The capabilities of the Move Earth spell, along with the way the duration limitations function make it look as if someone took a look at the Mold Earth spell and decided to buff it up to become its own, much stronger variant. The uses of the spell will be brought into more detail later in the article, but its uses are just as utilitarian as Mold Earth is.

Move Earth’s duration is much longer than the Non-Instantaneous effects of Mold Earth, allowing the caster to take advantage of the spell’s power for longer. The cost of this, however, is that the spell only has one main effect as opposed to Mold Earth with the three different possible effects it could have based on the player character’s choices, though this main effect can be utilized in different ways.

Move Earth has many restrictions and limits that hinder its usefulness in a situation in which a player would consider using it. To start, Creatures within the area being affected by the spell cannot actually be harmed due to the amount of time the spell takes to make the effect happen, which is 10 minutes per effect.

Also, the spell must be concentrated on for those 10 minutes, which gains them a new piece of terrain to manipulate every 10-minute concentration check, and the spell does not affect Natural Stone, Stone Formations, and plant life.

This could even cause problems for the players as if an area carved out using the spell’s power had left the area unstable, there is a chance it could collapse and block the party off again from whatever they were using the spell for in the first place.

While Move Earth already seems to hold a better capability than Mold Earth could, it does cost the player a 6th-level spell slot. This is a rather costly use of a slot, especially when that slot could go to more destructive or passive spells that could buff/heal the party such as the Heal Spell or the Sun Beam Spell. As such, there’s a decent chance that players who have gained the ability to select 6th Level Spells will decide to take those that hold a more direct use than the Move Earth Spell.

The main point of the spell is to be able to move an area of terrain no larger than 40 feet, specifically clay, sand, and dirt. One of the things that the spell can be used for the spell to be able to create a trench that is about 20 feet deep.

Thus giving the party an area in which they could safely travel without being subjected to enemy arrow fire, should they find themselves in a hostile environment in which archers are a common problem.

Reading tip: Check out our guide on detect magic 5e to find traps hidden away in these trenches.

The Wall of China

Another use of the terrain that is selected by the spell is to be able to form a 20-foot wall that can be used to block an entryway or blockade a door from being broken into. If they coordinate certain spells with other members of their party, then they could form a choke point with the Terrain that is affected slightly before a group of enemies arrives.

This gives the other spell casters a chance to change an area of terrain into Difficult Terrain, making the enemy have a harder time getting through and towards the party, while also giving the party an easier time engaging the enemy while they are struggling through the terrain.

Although the spell itself cannot directly harm enemies through its effects, the caster can set up a situation in which they are harmed through the method of gravity. If they are on a large embankment that is high above the ground, such as a hill or mountainous area.

Then they could spend the time loosening the dirt that makes the path upward, before coordinating with their party members to be able to force the enemies to fall off the path by making it collapse under their weight. This method could require some discussion with the Dungeon Master as to whether this is an acceptable use of the spell or not, but it is a use that exists nonetheless.

As stated in the previous sections, Move Earth does have its multiple uses that could hinder the enemy and make combat against larger groups of them an easier endeavor, or even be able to completely avoid some combat encounters, depending on how the Dungeon Master rules some uses and the limitations they have. As such, the Move Earth spell could also be seen as a wanted of a spell slot, since using a 6th-level spell slot could be seen as quite a waste.

Even more so since there are some spells that can definitely help the party in the middle of combat far more and more directly than Move Earth can. Overall, I believe that if a player wishes to take this spell, they do so knowing that they will be utilizing its features in a more defensive and outside-of-the-box way, as to make sure they get their spell slot’s worth out of it.

What could be considered the main, albeit simpler difference between Mold Earth and Move Earth?

The main difference is the limitations between the two, but to keep it shorter than that, Mold Earth cannot form structures with the selected terrain, while Move Earth actually allows the caster to form and shape the terrain selected into a structure that can be utilized.

Does the Terrain used during Move Earth return to what it was after the spell’s duration is over?

The duration is meant to show how long the caster can maneuver the selected terrain before the terrain itself returns to its natural state, and whatever function or structure that was made with the spell falls apart and disappears.

Could the Terrain formed by move earth be used to form a ramp that could make reaching certain areas easier?

As long as the Dungeon Master allows for the terrain to be formed into this type of structure, then yes it can. Just as a reminder for this though, the spell requires concentration to work, and once the duration of the spell is over, the ramp would fall apart and leave a flat area of extra dirt from wherever the party had made the ramp.