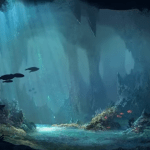 For those who had read the article on Move Earth, you will find a similar functioning spell within this article as well, as the Earth is not the only element that can be manipulated to such a degree. As such, it is time to focus the attention of this article from the Earth beneath one’s feet, to the waters that reside nearby with the Shape Water spell.

Contents hide
What is Shape Water 5e: mechanics and requirements
Attributes
Shape Water description
Advantages and drawbacks
Advantages
Disadvantages
Best uses for Shape Water 5e
To cause disarray within an enemy Navy or Army
To hide within a body of water.
Advice and final thoughts
Shape water 5e FAQ
Does the water that is moved in any form during Shape Water still oblige to the forces of Gravity?
Could a player have the shape water take on the shape of the human body as a simple shape?
What would be the stats for Shape Water 5e if it was a way to damage creatures and/or ships?
Related Posts:

What is Shape Water 5e: mechanics and requirements

You choose an area of water that you can see within range and that fits within a 5-foot cube. You manipulate it when you cast Shape Water in one of the following ways:

If you cast this spell multiple times, you can have no more than two of its non-instantaneous effects active at a time, and you can dismiss such an effect as an action.

Like Mold Earth from the previous article, the Shape Water spell is a Cantrip, meaning there is no spell slot that would be expended from using the spell in whatever circumstance the caster chooses to use it. There is also no material cost outside of the Somatic component required for casting, meaning that there is truly no limit to how many times the spell is cast by the player.

All that limits the player in regards to the amount of time in between each casting is the non-instantaneous effect durations and the number of effects that can be active at one time.

There are four different things that can be done with shape water, as opposed to the three that could be done with Mold Earth; Moving or Changing the flow of running water in any direction, shaping the water into a shape of the caster’s choosing and to animate them in a direction as well.

It is also possible  to change the water’s color and/or opacity, or the caster is able to freeze the water; similar to wall of ice 5e. This is only possible so long as there are no creatures within it. This gives the spell the most uses that could be done with it, as opposed to a singular utility spell that would only have one main use for it.

Yet again similar to the Mold Earth spell, Shape Water has a number of uses that can benefit the party and their allies in a variety of ways. These uses will be discussed later on, but they are still very ingenious to utilize against an opponent in or outside of combat.

All four of the effects of the spells are completely unable to deal any direct damage to an enemy, due to the nature of the spell and the writing of the various effects that the spell is able to be used for.

To cause disarray within an enemy Navy or Army

Hostile armies tend to use waterways to their transport various goods such as supplies or soldiers to a certain position, to have ship-to-ship battles on the open waters, or to provide naval support to infantry that may be nearby.

With Shape Water 5e, its multiple effects can actually cause some harm to whatever naval capability an enemy might have. The Caster could freeze the water in front of a ship, causing them to wreck it on the magically made 5 ft. ice cube that would appear in front of them, or even block up a river for a time.

They could also change the direction of the flow of water to be able to force enemy boats to beach their boats at a certain point along the river, not exactly damaging the boats but forcing the enemy to continue to whatever their destination might be on foot, thus slowing them down.

Shaping the water into a form that can be used however the caster wants can damage the ships themselves or they could form a small water wall, possibly slowing down boats in a different way than what was previously discussed.

To hide within a body of water.

The final effect of the Shape Water, which changes the color and opacity of a body of water in a 5 ft cube could help with hiding from enemies hunting them down. By making the water a darker color and murky in opacity, any enemy that would be trying to find them would either have a difficult time searching for them, or just be completely unable to see the caster. This is a great use for when you are playing as a pirate.

Throughout this Shape Water 5e Guide, the comparison has been made between Mold Earth and this spell several times, but this is not without reason. The two spells share similar functionality, capabilities, and limitations, with the main difference being the element that is the focus of the spell and its powers.

At the same time, it also shares a similar amount of usefulness that can be worked with by a player, and in turn, shares the possibility of when it would either be overlooked in comparison to other spells or simply never chosen to be a part of a player’s spell list.

As such, It is my personal opinion that if you choose to take this spell into your spell list, you use it in a defensive/sneaky manner, otherwise, there would not be much use for it outside of being presented with a situation that bluntly reminds the player that they do indeed have the Shape Water spell and could use it in this situation.

Does the water that is moved in any form during Shape Water still oblige to the forces of Gravity?

Regardless of whichever effect is chosen by the caster, and regardless of how the caster manipulates the chosen area of water, the area would still be affected by gravity.

Could a player have the shape water take on the shape of the human body as a simple shape?

This is mostly up to the Dungeon Master of whatever campaign the spell is being used in, but in my own personal opinion on this, I believe it would be a simple shape, due to the body being about 70-80% water, and thus making it a simple shape for water to take.

What would be the stats for Shape Water 5e if it was a way to damage creatures and/or ships?

Well, a 5 ft. cube of water, thanks to the math done by a user on DnD Beyond known as NordicNinja, would weigh about 3.9 Tons, and a Cube of Ice that size would weigh 3.6 Tons. That means, with an Ice Cube that size, a Dungeon Master could rule that the Cube has an AC of 13, and about 18 (4d8) Hit Points.
One could also rule as a DM that the Cube would have Proficiency against Bludgeoning damage based on the Caster’s spell-casting proficiency bonus. When determining Damage, the best source to look into for that would be the Trap Rules from the Basic Rules of Dungeons and Dragons.