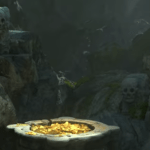 Elemental spells that exist within Dungeons and Dragons tend to focus more on being utilitarian than causing direct damage to a group of enemies. One such spell, this time controlling the very air a majority of the creatures within the world of Dungeons and Dragons breath, is Wind Wall; A rather self-explanatory spell as to what it does.

Contents hide
What is Wind Wall 5e: mechanics and requirements
Attributes
Wind Wall description
Advantages and drawbacks
Advantages
Disadvantages
Best uses for wind wall 5e
Defense against Projectiles
Defense against Gases
Advice and final thoughts
Wind Wall 5e FAQ
Can the Wind Wall damage any creature that attempts to go through it that isn’t normally unable to?
Can the wind wall be used to encircle an escaping Vampire that is in its gaseous form?
Would the damage was done by the wind wall’s formation effect player characters within range as well?
Related Posts:

What is Wind Wall 5e: mechanics and requirements

A wall of Strong Wind rises from the ground at a point you choose within range. You can make the wall up to 50 feet long, 15 feet high, and 1 foot thick. You can shape the wall in any way you choose so long as it makes one continuous path along the ground. The wall lasts for the Duration.

When the wall appears, each creature within its area must make a Strength saving throw. A creature takes 3d8 bludgeoning damage on a failed save, or half as much damage on a successful one.

The Strong Wind keeps fog, smoke, and other gases at bay. Small or smaller Flying Creatures or Objects can’t pass through the wall. Loose, lightweight materials brought into the wall fly upward. Arrows, bolts, and other ordinary projectiles launched at Targets behind the wall are deflected upward and automatically miss. (Boulders hurled by Giants or siege Engines, and similar projectiles, are unaffected.) Creatures in Gaseous Form can’t pass through it.

While the wall is still up, it can deflect arrows, magic stones and crossbow bolts upwards into the air and cause them to automatically miss, along with any other small, loose, and lightweight objects that are thrown at the wall. Gaseous creatures that attempt to go through the wall simply cannot, and neither can Small or smaller flying creatures or objects that try to simply go through it.

This gives the spell a great use as a form of defense against projectiles that could cause a great deal of damage to a player, especially if the weapon or the projectiles are enchanted to inflict extra elemental damage along with the piercing damage arrows or bolts normally do.

Although its a minor addition, it can also prevent gases, fog, and smoke out of an area as well, allowing the area on the other side of the wall to remain a clearly viewed area/

When the wall is first summoned in by the caster, any creature that happens to be within the area of the wall once it’s formed has to make a Strength Saving Throw, or else they take a decent amount of damage from the wall.

Although this doesn’t seem to be a constant damage effect, the fact that it does any form of damage means that it can be used in a battle to be an offensive tool as well as a defensive one.

The wall can take whatever form the caster chooses to have it take, so long as it remains in a size equal to 50 x 15 x 1 foot. So, as an example, the players could have a wall with a lip at the top that bends 90 degrees in one direction or the other, blocking off a possible way for a creature to enter the room if the wall was not formed directly next to a doorway that the caster wanted to block.

The freedom on the wall’s shape during its formation could permit the caster to change the shape of the wall based on whatever is needed to be defended.

Large projectiles, such as Boulders launched by siege machines, Giants, and other similar projectiles of a Large size are completely unaffected by the formed wall, keeping the danger of a player being crushed by a bolder, or pierced by a Bastila Bolt very much active.

The required physical materials for the spell, specifically the exotic feather is not only difficult to find, as the Dungeon Master could read between the lines of the spell’s requirements and name a specific bird the feather has to come from, but even then the feather can be expensive to purchase from a shop keeper. As such, castings of this spell are very limited due to this part of the required physical materials.

As most of the spell describes, and what has been described above, the Spell can stop any and all standard arrows and crossbow bolts from coming through the wall, forcing them to fly upwards and automatically miss.

The party can utilize this by forming the wall in the middle of a battle directly in front of an enemy or a small group of enemies that are using bows or crossbows as their primary weapon. Since the wall also damages enemies when it is formed, the wall could even have a chance of killing them if their health pool is small enough to do that much damage.

Along with defending against projectiles, the wall can be used to stop Fog, Cloudkill, Smoke, and other gasses, including monsters that have or can take a gaseous form from going through. This is especially useful against monsters such as a Gas Spore, or creatures that are capable of using the spell Gaseous Form, making the spell effectively useless when faced against the Wind Wall.

Although this spell is no Magical Barrier or Wall of Ice, the Wind Wall spell is capable of defending against a multitude of things that could make combat more difficult to handle, especially with a larger group of enemies or even a mini-boss that has a spellcasting ability with the Gaseous Form spell.

Granted, larger objects like boulders are capable of going through the wall, it is more than a match for standard projectiles, and thus makes it useful in battle as a magically formed defensive formation.

This spell is definitely worth picking up as a spell caster, even though there are other, stronger wall spells that can be paired with this spell to be able to make several feet of various wall formations, which in turn makes for a stronger fortification against multiple objects and forms of attack.

Can the Wind Wall damage any creature that attempts to go through it that isn’t normally unable to?

This is up to the Dungeon Master and house rules within the Campaign, but the wall could deal the same amount of damage it would do to enemies within the area of the wall when it formed, along with having to make the same Strength Saving throw to not only be able to avoid the damage, but even to the extent of being able to go through the wall.

Can the wind wall be used to encircle an escaping Vampire that is in its gaseous form?

The wind wall can indeed surround the vampire, but unless the ceiling of the room is 15 feet or lower, then the vampire will be able to fly over the wall unless the form of the wall is taken to have a dome-like structure when the caster forms it.

Would the damage was done by the wind wall’s formation effect player characters within range as well?

Yes, the damage and the Strength Saving throw required to avoid the damage done by the wind wall’s formation would have to be done by both player characters and hostile NPCs alike.