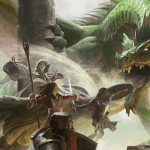 In a world where magic is commonplace, danger and opportunity lurk behind every corner. Detect magic in 5e DnD is a great way to breathe life into this fantasy world’s surroundings and discover things the naked eye can not see.

In this guide, our experienced Dungeon and Dragons expert (Justin) is taking a closer look at how to use Detect magic in this edition. We will discuss pitfalls, opportunities, mechanics, and ways to surprise players and DMs with this funny little spell.

When you have spotted a presence, you can use an action to see the aura of magic around the creature or object. You can also determine which school of magic it belongs to. However, you can’t deduct what spell there is resting on this item.

So what about walls and barriers? You can use detect magic to penetrate through most things, but it can not go beyond 3 feet of dirt, 3 feet of wood, 1 foot of stone, 1 inch of regular metal, or a ⅛ inch of lead.

A powerful benefit of this divination ritual is that you do not need to have materials for casting it. Thus as long as you can say words and move your hands, you can cast detect magic without having to spend something or sacrifice (valuable) materials.

The divination ritual can be done by six classes, which is a lot. However, there is almost always someone in the party of adventurers who can cast it. So keep your eyes open that not too many characters pick detect magic, and remember to synergize.

The most obvious and potent use of the Detect Magic ritual is discovering magical items. These might be mixed in between piles of junk or hidden behind a book or a hidden wall. As long as it is not too thick, the spell will be able to discover it. This spell is beneficial if you are venturing into a dark dungeon or a mysterious wizard tower that has not been adequately searched yet.

Spot enemies under a magic effect

While you can not spot enemies that have been created by sorcery by using detect magic, you can spot those that have been buffed or harmed by magic. As long as there is an active magical effect and they are within 30 feet (plus no enormous obstacles), you can pick them out by their faint aura.

Is your Dungeon Master a fan of traps and trickery? Well, this spell often helps you spot and avoid pitfalls that have a magical component. In dungeons and unknown labyrinths, this can be a life-saver.

Tip for DMs: Are you annoyed with your players finding your magical traps? Set up a few magical traps in combination with old-fashioned regular ones. Your players will use detect magic to see that trap and think they are all in the clear. That is when your common trap will give your players a scare.

Find out who is charmed

An NPC or even a fellow player who has been charmed can give you quite a headache. For example, you have just defeated a strong enemy, and he seems to be dead. All straightforward, right? Wrong! The villain has cast Feign Death on himself and is pretending to have perished just to return later. The same goes for NPCs and creatures under the influence of, e.g., Catnap.

By using detect magic, you can be sure if this boss has indeed died or is under the influence of a spell that is just making it seem like you are all safe.

Hidden in plain sight, there might be all kinds of treasures lurking. However, due to the large number of items there might be around, you won’t be able to see them. An excellent example of this would be a magical book in a vast library. If you don’t have detect magic to find it, you might be searching for hours, if not days.

Dungeon Masters: it makes sense that scrap dealers, specific merchants, and shopkeepers will be able to cast the spell. The reason is that because they handle so many items, it is an advantageous ability to have. So keep this info in mind when building a world.

Useful, but don’t always count on it: Detect magic is helpful for finding objects and traps. However, if you use it all the time and over-rely on it, you might lose out on better-hidden treasure and won’t spot regular traps. Instead, an intelligent DM will start hiding things behind lead and scattering them around standard traps.

Exceptional for loot: If you are short on time and have to filter through many items, this divination ritual allows you to find magical items like a necklace of fireballs easily. These often are worth a lot more than their ordinary counterparts.

Be prepared: make sure you are not distracted by casting this ritual and magical auras around you. Regular monsters like the astral stalker can still sneak up on you and surprise you.

Don’t allow players to spam detect magic: A common occurrence is that players just start spamming detect magic in 5e. Suddenly, they think there are loot, trap, and monsters all around them. Players spamming the spell isn’t just annoying; it can foil your excellent plans too. Make sure you prepare some smart ambushes for when they are casting this spell.

Lead and barriers are your friends: A sheet of lead is not expensive, so an evil wizard with mountains of gold and jewels will be smart enough to incorporate lead into a hidden compartment or a treasure chest on the floor.

There is a reason why so many (veteran) players love to pick detect magic as a spell for their character. Despite not being all that helpful in combat, the divination ritual is excellent for almost every other aspect of the game. From selling and buying items on the market to exploring massive dungeons for loot and looking out for traps in a wizard tower, detecting magic is a great pick.

Dungeon Masters should be on their toes when a player picks this spell. You should no longer rely on magical traps, and be smart about hiding loot and specific times.

You might also like: The ultimate guide to Planar Ally 5e and Remove curse in 5e DnD.

Does detect magic 5e require a line of sight?

No, you can detect magical items through a barrier. As long as the barrier, e.g., a wooden wall, is not too thick, you don’t need a line of sight to detect magic.

Yes, you can see the aura of a creature or an item that has been turned invisibility if you use detect magic and the object or NPC is in the line of sight.

No, detect magic only detect the effect of magic like a charm or a unique magical ability of an item. It does not detect the magical aura of beings that are created or reanimated by a spell-like the undead are.