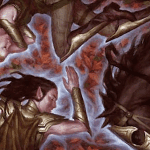 Astral stalkers are bulky humanoids with green-black scales as skin. They have oversized claws for fingers, each claw being around the length of a human forearm. In addition, the monster wears a belt made of its “collections.” Their collection usually comprises skin hides, skulls of various creatures, scalps, and many other trinkets from past victims.

What are Astral Stalkers?

As thrill seekers, they often scavenged for fights with beasts that were dangerous and challenging. They scattered thousands upon thousands of astral stalkers around the astral plane. It is unknown whether their curator reached their goal. However, in the present day, you can still encounter astral stalkers.

In modern times, astral stalkers act independently, while some make small hunting groups. The number of trophies and honors always determines the leader. Others who work by themselves operate as bounty hunters for powerful deities. It is unknown whether astral stalkers can reproduce. However, the species lower in numbers as time goes on.

Astral stalkers look like vicious monsters. But don’t let their appearance deceive you. These clever monsters s never engage in a battle without detailed planning.

They study their battleground and prepare for ambushes designed to weaken their enemy. They are skilled at playing dirty and take advantage of unpredictable tactics. For example, they are striking their opponents from unexpected angles. Astral stalkers deem their fights fair, but they are not hesitant to sink their claws into unprepared opponents.

All astral stalkers follow an odd set of tenets called “The Rules of the Hunt.” The first clause states they won’t hunt for creatures that have evaded them. Their second clause is that they do not betray someone who has employed them for over a year, no matter the pay. The final clause is that they will never hunt their kind.

Astral stalkers have a challenge rating of twelve. Therefore, they are a medium threat level challenger. These are monsters you want to avoid fighting at the start of a quest.

Astral stalkers are elusive opponents. It is unlikely you’ll know when they’ll attack. However, they only charge in natural terrain. Their ability to hide makes this desirable.

They have unique qualities that make them harder to detect. Such as camouflage and evasion. In natural terrain, astral stalkers can conceal themselves. This includes landscape that doesn’t traditionally give concealment.

In addition, their elusive prey attribute makes the astral stalker hard to track. Anybody attempting to track them faces a -10 penalty on survival checks. They are challenging to detect, but it isn’t impossible.

They have unique qualities that make them harder to detect, even more so if you fight them in a deserted goblin cave. The qualities are camouflage and evasion. In any natural terrain, the astral stalker can conceal themselves. This concealment includes landscape that generally doesn’t give hiding. In addition, their elusive prey attribute makes these opponents challenging to attack.

Anybody attempting to track an astral stalker faces a -10 penalty on survival checks. Astral stalkers are difficult to detect, but it isn’t impossible.

Don’t Be Afraid to Run

If your party is low level, don’t be afraid to escape. It won’t be easy because of the astral stalker’s ability to track (even in different planes of existence.) However, there are ways to escape the stalker. First, you can take advantage of magical items—for example, a ring or cloak of invisibility. Alternatively, you can use teleportation devices or other gimmicks.

Astral stalkers will use their invisibility when closing in on their target. Afterward, they will move forward with a throat dart. An astral stalker will make sure you’re weakened before engaging in combat.

At the start of the battle, you will feel the effects of poison. Therefore, make use of healing spells and potions before engaging further. In addition, having a battle mate with a Protection From Poison attribute would be very helpful. The feat neutralizes any poison to an individual touched by the individual.

After weakening its victims, the astral stalker will attack. They will strike and sink their claws into their prey. When facing a more formidable opponent, we will see a different tactic. In that case, they will use a hit-and-run strategy. The monsters will attack with poison darts, then track their weakened opponent. They will repeat this strategy until they can finish the job.

If you don’t have any way to mediate the poison damage, the battle may look hopeless. However, there are a couple of ways to creatively outsmart an astral stalker. First, they are more logical than creative so they will be more calculated. You can use spells and items like the necklace of fireballs to foil the stalker’s strategic routines.

An astral stalker can turn a creature it hits with a melee attack into a quarry. The beast knows where their target is, including different planes of existence. But the monster can only designate one quarry at a time. If you fight as a team, you will disorient the astral stalker.

One clever method of fighting an astral stalker is using Tasha’s Laughter. Tasha’s laughter makes any opponent fall into fits of laughter when they miss a saving throw. We can combine this with spells that harm an enemy’s saving throw, such as a bane or give a bestow curse.

In addition, while the creature focuses on another character, your party should attack the astral stalker with full force. These foes always have their eyes on one person at a time. You can use this to your advantage and deal with repeated blows.

As said earlier, astral stalkers only attack in natural terrain. Preferably a place far away from interruptions. It would help if you manipulated the terrain around your party.

An astral stalker has a multitude of battle-specific attributes. Such as hunter’s hide, which adds their constitution to their armor class. In addition, they have the elusive prey attribute, which gives creatures a disadvantage when performing checks meant to track an astral stalker.

They are level five spell casters, and their ability is wisdom. The spells they have prepared are hunter’s mark, jump, long strider, and pass without trace. Astral stalkers also have the swift hunter ability, which means they get a dash or hide bonus action. They also have sneak attacks, which deal an extra seven damage when it hits a creature with a weapon attack.

Your party should be none the wiser until the monster attacks. Astral stalkers will always do an ambush. This ambush will weaken the team. These foes play dirty in fights.