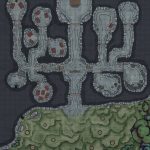 Goblin caves are generally small, twisted, and treacherous devilish holes. A good designer of goblin cave map for DnD 5e knows this. The identification of these human-like monsters filled dens is given through religious totems and ragged clothes in every corner of the place.

Inside these caverns, corridors leading to different paths are as common as passages that lead to places you’ve already seen before. Said corridors and narrow hallways are always a given when entering these lairs; Perfect to ambush adventurers who dare step within those walls.

The Goblinoid’s society is led by power. It can be either physical strength or tactic intelligence – or both – but there’s always a leader. The goblins that get the leadership are usually the most powerful in the tribe. Given its violent nature, a hierarchy is quickly formed.

Privacy is almost unknown in a goblin den, so in their lairs, almost all of them sleep in the same space, consequently making it extremely difficult to perform an ambush while they’re asleep.

The leader in the goblin cave has access to a private sleeping chamber. A room made exclusively for them so they’re not obligated to sleep near their kin. These should all be factors in your goblin cave map.

It would be pleasant to highlight its narrow walls and numerous entrances, and also include multiple different noises coming from them. Exclusively to induce the sense of loss in your players.

Combat in the goblin cave

While playing as Goblinoids, there is a wide range of dirty tricks you may be able to engage players with. Sneaky ambushes, flanking and overwhelming their numbers, exploiting your traps positioning to deal huge bursts of damage. or even search for opportunities during battle to slay their weakest opponent in sight are their most preferred ways to deal with invaders.

Their morbid sense of humor reflects in their traps. Demoralizing enemies with cheap tricks and lethal traps are their most honorable way to fight. Some traps are simple and harmless – also undoubtedly unpleasant –, while some others are… well…

Table for damage from traps

ROLEPLAY in a DND goblin Cave

Volatile, short-tempered and greedy beings. They are the most likely to be leaders since their survival comes first and will do anything to ensure that. Even backstab their own followers.

This variant doesn’t have many malicious characteristics compared to other goblinoids. They have their own method of doing things and generally follow their will without thinking about its consequences and how it’ll affect the life of other beings.

Known for their brutality and not so much by their brightness. Bugbears are beings of pure strength with little to no knowledge or cleverness. They enjoy cruelty on its purest form, and this includes: enslavement of weaker beings, torture of prisoners and eating other humanoids.

Although they are not the most intelligent variant, they also know very well when to flee from a hopeless battle.

Some encounters need to be balanced based on the party’s level. But you can find some below, considering the whole party is level 3.

What are important rooms in a goblin cave map?

Some of the most important rooms are the food storage space, the room where goblins hold captives, a room for the boss, and a room for religion if the goblins have one in your world.

Where should I hide the loot in a DnD goblin cave?

Some loot-like crude weapons can be scattered all over the place. however, the majority of the loot should be found in the religious room and the room for the boss.