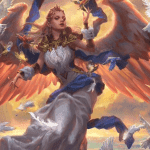 The party’s Aasimar immediately snaps into attention as he starts hearing what others perceive as a soft melody, a gentle hymn, and a singsong whisper.

What is the Celestial language in 5e DnD

When we think of languages in 5e DnD unrelated to Dragons or from deep below in D&D, it’s usually Sylvan or Celestial. And while Sylvan is sometimes used by fey creatures such as Elves, Gnomes, Fairies, and so on.

The Celestial tongue in 5e is the language of heavenly beings, most commonly: Angels, Empyreans, Couatls and Unicorns, and Pegasi. It is often melodic (unlike Sylvan, which sounds like an ancient Elvish dialect). It is usually studied by priests or clerics and others who seek connections with the heavens and their dwellers.

The only D&D celestial-speaking race is the Aasimar. The celestial language in 5e is necessary for them as it’s the language they use to communicate with their Deva. A Deva is a type of angel which can act as a companion for an Aasimar, acting as their voice of guidance.

Devas can be interpreted in many ways, but they usually only communicate with their Aasimar during dreams, offering help and opinions through visions and other abstract forms of communication.

Celestials are higher beings, yes. However, they usually are servants of a specific god, and angels are no exception. They’re incredibly loyal to their gods and are all Lawful Good, even if their god is Chaotic. As such, Angels are often portrayed as linear characters, unless you would make one fall from the Heavens…

When they’re not busy being Aasimar’s guides, Devas act as a link between the Heavens and the Mortal Plane. They are the messengers of gods and act as their agents on Earth.

However, they should not be underestimated because they will not hesitate to deliver violence if they deem the correct course of action.

When a god deems someone worthy of punishment, their first tool would be Planar Angels. Planar Angels act on their god’s will to inflict agony on their subjects, whether through violence or through sending plagues to doom whoever thought to irritate their gods.

Solar Angels, however, are usually a god’s last resort. They are so powerful that they are often mistaken for gods. They possess a vast array of magical abilities, such as resurrecting the dead or granting wishes.

Surviving an encounter with a Solar Angel is highly unlikely, but if that does happen, it was never sent to hunt down the party but rather to equip them with blessings unlike any they have seen before.

Empyreans are celestials you don’t want to mess with. They are EXTREMELY powerful that nature around them alters itself based on their mood, trees would fall, and animals would die in the presence of a forlorn Empyrean, while life would bloom around a happy one.

Empyreans also possess nearly unrivaled combat power. They are equipped with the weapons and magic to decimate parties and can strike down, either with brute force or with firestorms and energy bolts. Did I mention that they are also usually surrounded by allies who look up to them for leadership and power?

An encounter with an Empyrean (even alone one) should almost always be deadly if the Empyrean decides not to favor the party. However, having one on their side should guarantee that the party will always be victorious and should thus be used sparingly.

Having serpentine features resembling fire snakes, and possessing stunningly beautiful wings, being almost immortal, Couatls would be one of the best choices to guard a dungeon or a vault that you want to let your party into. Why? Because they cannot lie.

Couatls are bound to tell the truth, but they will not hesitate to hold back information or answer in mysterious ways. In addition to that, they are immune to any scrying abilities, such as reading their thoughts or emotions, trying to figure out their location, if a spell-like fireball is coming, or any other trick your Divination Wizard would have up their sleeves.

They are an excellent pick for a roleplay session as they force the party to think of ways to get through this very ancient creature using eloquent speech and the right questions. I’d also say that having someone in the party who speaks Celestial would help get past the Couatl!

The magical steeds of fantasy settings aren’t absent from D&D 5E; let’s start with talking about the equine your party is more likely to encounter:
Unicorns.

Being territorial guardians and having an affinity for Fae, Unicorns are usually found in the Feywild or forests of a magical nature. Like most Celestials, Unicorns are typically sent by gods to guard specific areas against evil or those who seek to damage character, sometimes to guard a particular individual a god deems worthy of help.

They are incredibly attuned to their natural domain and can hear every single rustle of leaves and breath of the creatures that dwell within it. They are mainly creatures of health and bliss, possessing heavenly healing powers that originate from their ivory horns.

Meaning harm to a Unicorn’s domain means exposing the Unicorn to harm, and all those who harm a Unicorn face godly wrath. However, if a hero proves a pure enough soul, seeking nothing but spreading good in the world, they might be rewarded with this noble steed as a gift from the gods.

A Pegasus spends most of its life majestically soaring, like a peryton, through the skies, only to be seen on the ground, drinking from the purest water sources, then almost immediately going back into its native realm. They are straightforward to scare away, so a sighting of a Pegasus is much rarer than the already rare sighting of a Unicorn.

They could be used as steeds, but their taming process is unique. Pegasi indeed are intelligent creatures who must be spoken to and persuaded into being a hero’s companion.

They must first form a bond with their rider, which could be a tedious process, but if that bond is created, it lasts as long as the Pegasus’ rider stays true to their good nature. Having a Pegasus as a steed is a considerable combat advantage because of their paramount speed and agility.

Final Words about celestial language and celestials in 5e

Celestials are perfect for bringing more flavor into your games; however, they should be used sparingly so that they do not lose the aura of sacredness around them.

Whether it be a friendly Deva who has a knack for helping mortals, a dying Couatl that looks beaten by life but will still guard its secrets, or a gift from the gods in the form of a Unicorn to save the party from a potential TPK; meeting a Celestial will always be a remarkable event. It never hurts to know how to communicate with them in their native tongue.

If you enjoyed this guide, you might also love reading: