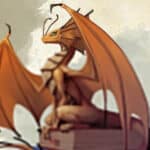 It’s dangerous to go alone! Take a Pseudodragon with you. If you are looking for a companion on your adventures, it is important to pick the right one.

In this guide, we will take a closer look into the Pseudodragon Familiar, the stats, how to get one and how you summon a Pseudodragon familiar. In addition, we have included an FAQ section at the end of the guide.

What is a Pseudodragon Familiar?

Let’s start with what a Pseudodragon is. This creature is a small dragon-kin creature known to be tamable by wizards. However, contrary to popular belief, they are not true dragons and are quite shy in nature. The beast is relatively tiny, only two feet in length from head to tail and around 7 pounds in weight.

A familiar is a celestial, a fiend like a quasit, or a fey that looks and acts like the creature you decide to take. It also has the same stats. Thanks to it being a fey and not the actual thing, you can effortlessly dismiss it and recall it wherever you like within a 30 feet range of wherever you are standing. Of course, some DMs give you a genuine Pseudodragon, so these rules don’t apply.

So to summarize, a Pseudodragon Familiar is a fiend, fey, or celestial that has taken the shape, behavior, and stats of a Pseudodragon after you have summoned the familiar.

Skills: This critter has a perception of +3 and +4 stealth; Those are some pretty respectable stats for activities like scouting. However, they aren’t spectacular analogized to the Crag Cat.

Senses: The Pseudodragon Familiar has a few senses that might come in handy. They have a Blindsight 10 Ft. and a Darkvision 60 Ft. That means these creatures can see in the absolute dark for 10 feet as if there was just as much light as on a clear day. Pseudodragon familiars also have a passive Perception 13.

Languages: These creatures understand both common and draconic tongues. Unfortunately, they lack the vocal cords to communicate in these languages. However, the Pseudodragon Familiar does have limited telepathy as an ability.

Keen Senses – Whenever this creature has to make a Wisdom check that relies on either sight, hearing, or smell, the familiar has an advantage on the next throw.

Magic Resistance – When a creature has the magic resistance ability, the damage done is halved when a damage-dealing spell targeted the creature.

Limited Telepathy – Your Pseudodragon Familiar can communicate with you – and any other creature – in simple ideas, emotions, and images for a range of 100 feet. However, it needs to understand the language of that creature. Uncomplicated thoughts are something like, “get me that potion.” In my campaign, a simple Idea has a maximum of two steps that are easy to convey.

Sting – The sting is pretty interesting. While it has the same stats as the bite, it has a unique effect.

The target of the sting must make a saving throw of 11 on the CON stat. If that throw fails, the target will become poisoned. If the saving throw fails by 5 (or more), the target that took the sting will fall unconscious for an hour – or until another monster wakes it up or damages the senseless creature.

How to get a Pseudodragon Familiar 5e

To get a Pseudodragon Familiar, you need to do the same as any other familiar. But, first, you cast the level one spell, Find Familiar. When you cast this hex, a spirit takes the form of an animal of your choice. This animal can be a bat, crab, cat, frog, hawk, owl, lizard, octopus, poisonous snake, fish.

As you see, there is no Pseudodragon Familiar on that list. So how do you summon one? If you examine Volo’s guide on page 213 and the Monster Manual on page 347, you can read the rules for a Variant Familiar. The Pseudodragon is one of those possible variant familiars in 5e.

There is just one problem with that: Variant familiars are meant for NPC’s, not players. So, in conclusion, the only two ways to get a Pseudodragon Familiar in 5e is to ask your DM if he allows you to select from the variant familiar list or if you can tame a wild one.

If you want to understand Find Familiar spell more profoundly, we have written the Ultimate Find Familiar 5e Guide! If you are interested in utilizing a Giant poisonous snake as familiar as a rogue, here is more information!

Is the Pseudodragon Familiar good in DnD 5e?

Intelligence: A Pseudodragon Familiar has an intelligence stat of 10. That means it is just as bright as an average human commoner. Pseudodragons can thus make complex decisions and be aware of their actions and mortality.

Thumbs: The paws on the Pseudodragon have thumbs. While the familiar has claws, they can use their feet to grab items like potions, gold, etc.

Language knowledge: Thanks to the knowledge of common and draconic languages, combined with high intelligence, the Pseudodragon Familiar can comprehend instructions just as easily as a typical human.

Scouting abilities – This familiar makes a great scout or thief thanks to the stats, dexterity, senses, and flying skills. Thanks to telepathy, the Pseudodragon Familiar can also give you live information on what it is seeing.

Low damage: These monsters don’t do a lot of damage, so if you want to have a reliable battle partner, you might want to keep looking around for a better pet.

No invisibility or shape-changing: Unlike some other alternatives, the Pseudodragon Familiar has no invisibility powers and can not shape change. Those are rather significant drawbacks for a monster built for scouting and spying.

No damage resistance: The Pseudodragon is one of the few familiars that does not have damage resistance. While your familiar is – in most cases – not a battle partner, this does make the critter less survivable.

The Pseudodragon Familiar in 5e is an excellent option for someone looking to change up the regular list of Find Familiar options. The monster has fascinating abilities that make it perfect for scouting out targets and thieving (unguarded items).

The high intelligence and limited telepathic abilities, combined with the fact that they understand the common and draconic speech, make these wanna-be dragons the perfect familiar to execute intricate plans.

There are some downsides to picking this familiar. The main one is that the Pseudodragon is not survivable or helpful in battle. They have no damage resistance, can not shape-shift or turn invisible to flee, and lackluster damage.
If I ranked the Pseudodragon Familiar in 5e DnD on a tier list, I would put it in the A tier. Just shy of the S tier.

Can a warlock get a Pseudodragon Familiar?

A Warlock can get the Pseudodragon Familiar with the Pact of the chain. There they get this familiar option. You can also use the Pact of the Chain if multiclassing with a (Chain) Warlock and another class. You will need to multiclass at least three levels into Warlock to access this ability.

Is a Pseudodragon a variant familiar?

According to the Monster Manual and Volo’s guide to everything, the Pseudodragon is a variant familiar. The fact that they are variant familiars means that only NPC’s can have this familiar as an option. You can not get the creature with the regular Find Familiar spell. That means you will need to ask your DM if picking one is allowed.