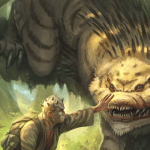 Every army needs a type of soldier that is light on their feet, can travel great distances, and even live off of the land, with the sole purpose of seeking out enemy positions and telling their commanders the information they have learned.

These units, Scouts, in DnD can be their monster type that can be encountered and combatted by a party, for even Bandits require Scouts. These Scouts, regardless of race or allegiance, can be quite an exciting combatant for low to mid-level parties.

Contents hide
What Scouts are: attributes and description
Attributes
Scout 5e description
Advantages and drawbacks
Advantages
Disadvantages
Best uses for Scouts in a Campaign
A squad of five or more of them works as a single unit.
As part of a mixed group of enemies, either as forward units or as archers.
As a way for the Dungeon Master to progress the plot.
As the main type of enemy encountered during the campaign
Advice and final thoughts
Monster FAQ
Is there any way a player can be a scout for the party, like the monster stat block?
What could be the absolute maximum their Preception could be?
What if I, as a Dungeon Master, want to make the Scouts stronger than they are?
Related Posts:

What Scouts are: attributes and description

Scouts are Skilled hunters and trackers who offer their Services for a fee. Most hunt wild game, but a few work as Bounty Hunters, serve as guides, or provide Military reconnaissance.

Scouts are Skilled hunters and trackers who offer their Services for a fee. Most hunt wild game, but a few work as Bounty Hunters, serve as guides, or provide Military reconnaissance.
TRAITS
Keen Hearing and Sight: The scout has advantage on Wisdom (Perception) checks that rely on hearing or sight.

Being able to sneak around is a crucial part of being a Scout, regardless of the creature’s species and whomever they swear allegiance towards. As such, their high modifier to the sneak skill combined with the skill modifier and their dexterity modifier becomes a +8 modifier to stealth.

This gives the scouts a better chance of catching their enemy, in this case, the player characters, off guard and unaware of their positions until the scouts attack them. Whatever other enemy types accompany them to the battlefield.

When an enemy is in the middle of a combat encounter, they usually only have one single attack that they can make. If they have Multiattack, they can usually attack a target several times in the same turn. This increases the amount of damage they can do against a player and their chances of hitting said player during their turn.

However, most creatures around the ½ CR range (If they do have Multiattack) can only use their melee weapons to be able to trigger a multi-attack. Scouts, on the other hand, can make two multi-attacks with either their Melee Weapon or their Ranged Weapon. These attacks allow them to either attack a player character within melee range twice with their shortsword or take their longbow and shoot at a single target twice.

In a situation where a player character or an entire party is either attempting to sneak by a group of bandits or set themselves up in a way that would be counted as an ambush. Any scout in the group that a party tries to sneak around has an advantage on Perception checks that rely on their hearing and sight.

Although quite impressive in what they are capable of in combat, the Scouts are incredibly weak in terms of their HP. Their average health of 16, or a 3d8+3 roll for any Dungeon Master who prefers to roll the HP of an enemy instead of the average.

This is equal to or less than most enemies with the same Challenge Rating. Only 5 other monsters within the ½ CR range have lesser average health than the Scout. The Scout does have a slight advantage, though, in the 13 CR, making it a tiny bit more difficult for a player character to be able to hit them.

Best uses for Scouts in a Campaign

A squad of five or more of them works as a single unit.

Although the Scouts can be mostly seen with other enemies that either match or surpass their Challenge Rating, they have enough combat capability to face off against a low-level party, ranging from level 3 up to level 6.

Use them as a single scouting unit consisting of five as a minimum. This gives the Dungeon Master the ability to use both forms of attack that the Scout has without throwing them into other units to defend them from being slaughtered.

This unit of Scouts can also be used for plot purposes as if the party decides to capture one alive. In addition, they can gain information that is either important to their current quest that they are working on completing at the time or on progressing the plot in the direction that the Dungeon Master wishes to have the party go down.

As part of a mixed group of enemies, either as forward units or as archers.

Even though these units can hold their own with a lower-level party, mainly when it is a group of scouts, as described above, Scouts can also be properly utilized in the same way with a mixed bag of enemies that the party can fight against. This way, the Dungeon master can still use the scouts for combat encounters without them being too easy for the party if they have gotten to a point of level where they would have been able to dispatch the Scouts if they were on their own.

In addition, they can also help with hunting down the party if said party is attempting to hide from them, thanks to their decent skill modifier for Perception of +6 (Skill+Wisdom Mods). Finally, their Keen Hearing and Sight ability gives them an advantage in perception checks involving their hearing or sight.

During combat, they can also be useful by acting as an underdog while a player character focuses their attacks on a much more dangerous, harder-hitting enemy. Of course, they also could be remaining in the back of the enemy group and working as archers to hit the players from afar while the stronger enemies close the distance between them and the party.

As a way for the Dungeon Master to progress the plot.

Suppose the Dungeon Master is having a hard time figuring out how to point the party in the correct direction of their goal, or the party is beginning to get lost in the world. The party members are unsure where they need to go for them to continue or complete their current tasks.

In that case, the DM can have a super small and short combat encounter with a scout or two that find the party. In this example, the Scout would surrender and tell the party where to go to complete their quest, giving the Dungeon master a means to give the party this direction. And this is without having to directly cut in as the one running the game and telling them the information they need to progress.

As the main type of enemy encountered during the campaign

Finally, suppose a Dungeon Master wants to run a Homebrew Campaign, with either a specific Dragon or other forms of Dragon based species as the main antagonist of the campaign. In that case, they can use these as the main creature the party would fight against throughout the campaign.

Of course, it would most likely be a campaign starting at around Level 4 and up to Level 6. Regardless, these creatures would allow the party to immediately understand that this campaign, and the enemies within the setting chosen by the Dungeon Master, is difficult but rewarding to complete and conquer.

The Scouts can be quite an interesting addition to a bandit raiding party, as a hunting group of their own accord, or even as a big component of a larger enemy/hostile faction.

The DM can utilize Scouts as either plot devices that can point the party in the right direction regarding completing their current quest or get them a tiny step closer to completing the entire campaign’s main objective.

In combat, whether they are by themselves or mixed in with a larger variety of enemies, they can either encircle and attack a player character from behind. At the same time, they focus on another enemy or attack them at range with their longbows.

Either way, the Scout is a useful addition to the battle, regardless of the party level, when encountering them on a battlefield.

Is there any way a player can be a scout for the party, like the monster stat block?

Although there isn’t a way for any player to be a scout in a similar manner to the Monster Stat Block in published material, there is an archetype for Rouge known as Scout.

This aspect gives them extra abilities to utilize, proficiency in Nature and Survival, and even the ability to attack more than one and have an advantage on initiative rolls. So, if a player wants to be a Scout after finding this monster stat block, point them toward the Rouge Archetype.

What could be the absolute maximum their Preception could be?

This depends on how the Dungeon Master reads into the Stat Block, but how it is written is the maximum. However, if we do some math regarding their Passive Perception and the rules regarding their modifiers.

They could have a total Passive Perception score of 18. This would be due to the 15 they already have, the +1 modifier in Wisdom, and the +2 Proficiency bonus being the components to give them such a score.

What if I, as a Dungeon Master, want to make the Scouts stronger than they are?

There are many ways in which a Dungeon Master can make any enemy, including Scouts, much more dangerous and a stronger enemy than they currently are within published media. For example, they could increase the dice rolled for their HP, AC, and Ability Scores to give them higher Ability Score Modifiers.

The Dungeon Master, if they don’t want to change the stats themselves, could instead give the Scouts a different melee or ranged weapon that does more damage to the party than the ones they currently have.

Of course, it is advised that with any modification done to make the enemy stronger, said changes are scaled in comparison with the party and their current level, so then one does not make such a simple enemy so destructive against PCs that the players are unable to beat them without getting killed off entirely. Keep the modifications within reason to keep said changes balanced and fair for the players to engage in a combat encounter.