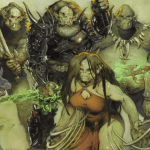 Beings considered both Good and Evil exist in various forms and shapes throughout Dungeons and Dragons. From the unholy Fiends in the Nine Hells to the Aberrations that could ruin one’s life and drive one’s mind to insanity, they can always cause problems for those who allow them to.

But, of course, for those trying to hunt these creatures down for whatever reason they have chosen, finding them can be rather difficult in certain environments. Thus, the Detect Evil and Good 5e Spell can help with such a problem, making the hunt easier than it would be without it, which is the topic of this article.

Ps: make sure to also check out the guide on Protection from Evil and Good 5e!

What is Detect Evil and Good 5e: mechanics and requirements

The spell can penetrate most barriers, but it is blocked by 1 foot of stone, 1 inch of Common metal, a thin sheet of lead, or 3 feet of wood or dirt.

When trying to find something, having a boundary between the caster and the being hunted can cause slight issues in a visual sense. However, the Spell can go through most barriers during the hunt for whatever creature can be detected by the Spell.

There are limitations to this Advantage, which will be described later as a minor Disadvantage, but it is still an important advantage to discuss.

As with the “Protection from Evil and Good 5e”, this Spell only requires a 1st level spell slot to be utilized. Having the Spell at such a low-level spell slot allows the caster to use it multiple times until the caster and their party either find what they are looking for or run out of spell slots.

Additionally, since the Duration is 10 minutes to add onto this, this effectively gives the caster a minimum of 20 minutes to find the being they need to find with this Spell and a sheer maximum of 40 Minutes (Minimum to Maximum number of 1st Level Spell slots obtainable by Clerics and Paladins).

As previously mentioned in the Advantages section, there are limits to the physical barriers the Spell can penetrate through.

The effects of the Spell get stopped when encountered with a barrier either made of stone that is 1 foot thick, an inch of common metal (Steel or Iron), a thin sheet of lead, and/or a wall made of either dirt or wood that is 3 feet thick.

This could lead to situations where a monster being hunted by a party utilizing this Spell as their main tracking tool could end up completely missing the being if they are behind a stone wall or other structures made out of the other materials listed above.

When looking for a Vampire, the number one issue with doing so is that they are very similar in appearance to normal humans. Unfortunately, this also applies to incredibly powerful vampires that could cast Alter Self on themselves to be able to hide even better than before. As such, the Detect Evil and Good 5e could help track down the Vampire and deal with them upon learning their identity.

Regarding disguises, both Celestials and Fiends, depending on their magical power, are capable of some that are indistinguishable from the real beings they are hiding amongst.

Even then, Fiends can even disguise themselves as other Celestials to fool their followers into committing acts that the real deity would otherwise find to be against their being.

As such, a person casting Detect Evil and Good could tell if they are speaking with a Celestial/Fiendish being and if they are disguised as another being in an attempt to fool them into doing their bidding.

3. Identifying Creatures in other Realms

When traveling between Planes of existence, one can find themselves rather disoriented and confused if they made a low roll in their Constitution or Wisdom Saving Throw.

The Fey, as an example, can sometimes be incredibly deceitful, especially in the Feywild, where some will try to entrap you in the realm forever through various means and devices.

As such, Detect Evil and Good 5e can help orient the caster by identifying the beings around them that would otherwise be found in a specific plane of existence.

Detect Evil and Good, although purely a cosmetic spell that only holds its uses in finding/discovering the identities of creatures targeted by the Spell, can be used in multiple instances.

From hunting Vampires, revealing the presence of Fiends or Celestials, and Identifying the creatures around you to determine the Plane of Existence one is in, the caster can have multiple tasks or problems that the Spell and its power could help in. Overall, a useful spell for Paladins and Clerics who require such creatures to be found and identified.

Would Detect Evil and Good 5e be able to identify possessions?

Absolutely! If a person is being possessed by one of the creatures listed as being identifiable by the Spell, then the caster using this Spell can determine if one of those creatures is possessing someone.

Can Detect Evil and Good be able to identify/locate aasimar and tieflings?

Due to them both being Humanoids and not Celestials and Fiends, respectively, the answer to this is a simple No.

Can the caster tell what creature they have identified through Detect Evil and Good if their character does not know it?

This is up to the Dungeon Master, but they could know what it is they have identified since it would be rather weird for them to have to guess what exactly it is they had discovered using this Detect Evil and Good.