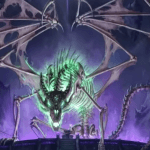 The Wall Spells can be seen as one of the most valuable defensive spellings, as the combined group of spells can assist a caster and their party in many ways. As such, only some of these spells are capable of a wall length and structural strength, such as The Wall of Stone 5e.

Other walls that you should check out are Wall of Ice 5e, Wall of Water and Wall of wind.

Contents hide
What is Wall of Stone 5e: mechanics and requirements
Attributes
Wall of Stone 5e description
Advantages and drawbacks
Advantages
Disadvantages
Best uses for Wall of Stone 5e
As a bridge or ramp to get over a chasm or other pitfall
A new addition to a stone structure in need of repairs
As a defensive fortification against enemy attacks
Advice and final thoughts
Wall of Stone 5e FAQ
Can the wall damage people when summoned?
Can the Wall be broken apart by a creature and then used as a projectile?
Related Posts:

What is Wall of Stone 5e: mechanics and requirements

● Target: Area of the Caster’s choosing within the range

● Components: Vocal, Somatic, and a small block of Granite

A nonmagical wall of solid stone springs into existence at a point you choose within range. The wall is 6 inches thick and is composed of ten 10-foot-by-10-foot panels. Each panel must be contiguous with at least on other panel. Alternatively, you can create 10-foot-by-20-foot panels that are only 3 inches thick.

If the wall cuts through a creature’s space when it appears, the creature is pushed to one side of the wall (your choice). If a creature would be surrounded on all sides by the wall (or the wall and another solid surface), that creature can make a Dexterity saving throw. On a success, it can use its Reaction to move up to its speed so that it is no longer enclosed by the wall.

When the Wall is summoned into existence, each of the panels required to put the Wall together can take quite a physical beating before collapsing.

Standing tall with an AC of 15 and 30 Hit Points for each inch of thickness the Wall has, the HP range of the Wall is between 90 to 180 Hitpoints depending on the configuration of the Wall.

In terms of a defensive structure, this would give the party more than enough time to prepare themselves. In regards to combat before the Wall was destroyed or dispelled by the Caster at their leisure.

So long as the Wall remains in the range of the Caster and is either comprised of 10 x 20-foot panels or 10 x 10-foot panels as per the spell’s function, the Caster can shape the Wall however they wish for it to be formed. The Wall doesn’t need to be in a vertical position or placed on any firm foundation for it to be created.

However, it must be able to merge with and be supported by any existing stone that may already be in the area, depending on the chosen form of the Wall.

Although the spell is more than capable of doing its job in a 10×10 or 10×20 setup, the Caster does have the option to extend it past the 20 ft limitation of its length.

However, if they decided to do this, they must have half of the size of each panel used to create supports for the Wall that is a part of the Wall by this point.

Should the Caster retain their Concentration on the Wall for the entire 10-minute duration of the spell, then it becomes permanent and cannot be dispelled.

This is the most useful when preparing for an attacking force ahead of time, as the Stone Wall would be capable of slowing down any enemy advance that comes towards the direction of the party and their fortifications.

Of course, this doesn’t mean that the Caster has to use Stone Wall before every battle or be unable to utilize it, but if the party needs defensive fortifications, then preparing the Wall beforehand is the best way to do things.

Given how the physical component required for the spell to be cast a small piece of Granite.

The Dungeon Master could easily make it to where the only place to get Granite is from Quarries, Mines, Caves, or Jewelry Stores that could possibly sell them.

Restricting the number of places where a spellcaster could readily find the material they need can, in turn, limit the number of times they can cast the spell, regardless of how many spell slots they have available for the spell.

As mentioned earlier, the Wall can be placed in a non-vertical position so long as there is an existing stone to support the Wall itself while it is being formed.

This method of summoning the stone wall can be used to create a bridge to cross a river or a ramp leading up to a structure. They can also replace any broken stone steps outside of a structure the party needs to go inside for whatever reason.

A new addition to a stone structure in need of repairs

If a stone structure such as someone’s home or a church needs repairs, the Caster could summon the Wall and form it in the spot where the old Wall used to reside.

With the Wall becoming permanent after Concentration on the Wall was held for 10 minutes, this method of repair and reconstruction could speed up any construction project that uses stone as the primary building material.

As a defensive fortification against enemy attacks

Finally, as the spell was supposed to mainly be used, the Wall could be set up to block or hinder hostile forces and their movements. They could attack, damage, and destroy the Wall using this method.

Still, the Wall’s existence would also give members of the party enough time to prepare for the upcoming battle and place themselves accordingly on the battlefield. This could also be utilized as a chokepoint or a kill box for the rest of the party to exploit.

Like the other Wall Spells, the Wall of Stone spell has many uses that go far beyond this article, as the spell’s functionality allows the Caster to get creative with its use.

This spell can be quite the defensive fortification, similar to the Wall of Force spell. Although the player can choose which wall spell they wish to go for in terms of their build, the Wall of Stone is a spell I would recommend grabbing if you need a passive spell that helps the party in many different ways.

Can the wall damage people when summoned?

Although the Wall cannot damage creatures in its area when it is created, it pushes them to one side or the other, one of the Caster’s choices. If the Wall surrounds the creature, they’d need to make a Dex save. After this save, they will be able to use their reaction to move out of the area to not get trapped inside the Wall’s area.

Can the Wall be broken apart by a creature and then used as a projectile?