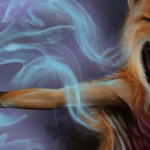 Stand tall and invincible as a spellcaster against the hand that wields a mighty sword or bow. Every bard, sorcerer, warlock, and wizard who has this spell at their disposal can seek protection and resistance through this whenever they may face their enemies. Learn more to reach its full potential.

What is Blade Ward 5e: mechanics and requirements

You extend your hand and trace a sigil of warding in the air. Until the end of your next turn, you have resistance against bludgeoning, piercing, and slashing damage dealt by weapon attacks.

Advantages and drawbacks of Blade ward

Through this, you can make the most out of the Blade Ward cantrip at your next Dungeons and Dragons session. Show off to your fellow party members and Dungeon Master what you’re made of!

When you find yourself in a tight spot, and you find yourself a glimmer of hope to escape, the Blade Ward cantrip comes in handy! As you are escaping from enemies who are after you, this spell can help you come out with a little bit of a scratch. For example, let’s say you are alone and cornered by a giant constrictor snake in the woods.

Instead of disengaging or dodging, you can use the Blade Ward cantrip as your action. Though this may trigger an attack of opportunity from the snake, you’d be only taking half of the damage if it hits. You can then run away. If the snake go ahead after you and continue to attack their turn, you’re still protected by the Blade Ward cantrip.

Stuck in a Pinch

Are you stuck in between palace guards wielding their longswords? Or even surrounded by swashbucklers amid the high seas? The Blade Ward cantrip is a great abjuration spell to protect you from harm’s way.

Especially if you are taking attacks from medium to high-damaging enemies, this is useful to reduce the blow by the end of your next turn. Even if you are in a situation with a horde of mobs, this can help you save some of your health if you are being targeted and taking all of the punches.

Have you ever dreamed of joining the circus but never had the talent to make it? Or are you in a position where you must take down an evil ringmaster’s plans? Well, worry no more because this simple cantrip can help you get in!

This is where the Blade Ward cantrip comes in handy. If any mishaps come along with the performance, using this cantrip can lessen the blow by half, so you can at least come out of it with enough strength to give a final bow!

The Blade Ward cantrip is a spell with much room to work. Unfortunately, it’s much underappreciated for its simplicity and applications. Before choosing this cantrip, you have to consider the possible implications since it takes up action and lasts only until your next turn. But this is a spell you shouldn’t shy away from.

Given the ideal situation, it makes for a great defense spell on the battlefield. So many enemies in the Dungeons and Dragons universe, from bandits to beasts, use weapons that deal with bludgeoning, piercing, and slashing damage; the Blade Ward spell can protect you from many encounters.

Does the Blade Ward cantrip work against traps?

According to Jeremy Crawford, lead rules designer of Dungeons & Dragons, “every attack is either a weapon attack or a spell attack.” Thus, if the trap is nonmagical and deals with bludgeoning, piercing, and slashing damage, it can then be counted as a weapon attack that can work with the Blade Ward cantrip.

Should I choose Blade Ward or Shocking Grasp for my next cantrip?

However, if you want an attack spell that possesses some handy features during combat, the Shocking Grasp spell is great to have on hand.

What are considered weapons for the Blade Ward cantrip?

Any weapon, whether it may be natural, magical, melee, etc., as long as it deals with bludgeoning, piercing, and slashing damage, is considered unless the Dungeon Master says otherwise.