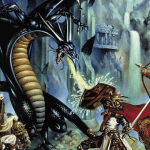 The Green Flame Blade cantrip is a mighty spell for every sorcerer, warlock, and wizard ready for a new journey. A green flame is cast on the blade of the wielder, where every strike that they make the weapon ablaze sets off on the enemies of the spellcaster.

What is Green Flame Blade 5e: mechanics and requirements

You brandish the weapon used in the spell’s casting and make a melee attack with it against one creature within 5 feet of you. On a hit, the target suffers the weapon attack’s normal effects, and you can cause green fire to leap from the target to a different creature of your choice that you can see within 5 feet of it. The second creature takes fire damage equal to your spellcasting ability modifier.

At Higher Levels. At 5th level, the melee attack deals an extra 1d8 fire damage to the target on a hit, and the fire damage to the second creature increases to 1d8 + your spellcasting ability modifier. Both damage rolls increase by 1d8 at 11th level (2d8 and 2d8) and 17th level (3d8 and 3d8).

If you are in a position where you are set up against multiple enemies from all directions, the Green Flame Blade can be there to save you. With its feature of green fire emitted on your weapon, you can use it to hit two close-by enemies at a time. Especially if you are playing a class that features extra attacks or even stacks with other spells, using the Green Flame Blade cantrip can do great damage overall throughout multiple rounds.

In a setting filled with a land of deserted frost, who knows what lies ahead? At any moment, danger strikes. This is where the Green Flame Blade comes in. While you are out in the arctic fighting enemies with your weaponry, the additional fire damage from this cantrip can be useful, especially against creatures that are vulnerable to this damage type. It’s important to note that when a creature is vulnerable to a damage type, they take double the damage, so use this to your advantage!

Are you bored of your regular game of hot potato and take it up a notch? The Green Flame Blade cantrip adds more spice to the game. So instead of a boring, old potato, take a chance to play with fire.

With you in the center of the circle, you and up to eight other players can gather around you. You can strike one of the players with your melee weapon, which they would have to dodge. This is where the hot potato game aspect comes into play. Rolling a d4, d6, or d8, depending on the number of participants, whatever you roll, you cast Green Flame Blade to hit one of the players correspondingly. This is all in good, dangerous fun if you want to mess around with your fellow party.

The Green Flame Blade cantrip is a great spell for sorcerers, wizards, and warlocks on the battlefield’s offensive side. Combining this cantrip with your weapon surely brings a lot of finesse and creativity when making your next weapon attack.

With the right build and direction, you can maximize this cantrip with a combination of class and racial features and spells. However, it is important to note that with this spell, you must be mindful of its limitations, specifically the range, target, components, and duration, which may make this spell quite situational.

Nonetheless, if you seek a spell that doesn’t break the bank on spell slots and materials, and does great additional damage, then the Green Flame Blade cantrip is right for you!

Does the green fire from the Green Flame Blade cantrip have to leap onto another target?

No, it does not. According to the spell, “you can cause green fire to leap from the target to a different creature of your choice.” With the keyword “can” put into mind, it is optional to inflict fire damage on another target. So, it is up to you if you want to strike the current target that you are focusing on or someone else.

Should I choose Booming Blade or Green Flame Blade for my next cantrip?

What kind of weapons can I use with the Green Flame Blade cantrip?

Despite the name of the cantrip, so long as you have a melee weapon worth only a silver piece, you’ll be more than able to use this spell. There is an array of melee weapons you can choose from, such as clubs, daggers, weapons, and so on, that are worth the price, so you don’t need to worry about the limitations.

Does the Green Flame Blade cantrip light an area?

Outside of turn order, the Green Flame Blade cantrip, unfortunately, does not emit light on the weapon when cast. Since this spell’s description does not specify if the green fire can do anything else but inflict damage, then it can do nothing more. This is because you have to consider that this is a magical fire that does not share the same properties of fire found naturally.