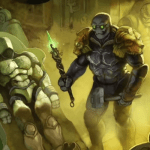 Bestowing temporary life to nonmagical objects, a fifth-level mage can make a small army of everyday items under his mental control. This transmutation spell has a range of 120 feet, giving it a large variety of objects to animate.

What is Animate objects 5e: mechanics and requirements

You can’t animate any object larger than Huge. Each target animates and becomes a creature under your control until the spell ends or until reduced to 0 Hit Points.

As a bonus Action, you can mentally Command any creature you made with this spell if the creature is within 500 feet of you (if you control multiple Creatures, you can Command any or all of them at the same time, issuing the same Command to each one).

You decide what Action the creature will take and where it will move during its next turn, or you can issue a general Command, such as to guard a particular Chamber or corridor. If you issue no commands, the creature only defends itself against Hostile Creatures. Once given an order, the creature continues to follow it until its task is complete

On many occasions, adventuring parties will find themselves battling against a single, more significant, stronger opponent, which they cannot defeat easily in a one-on-one fight.

This spell can come in handy in those situations, as it can provide great distractions to the opponent or even be used to out-damage them since the objects will have a more significant number of attacks than the enemy.

Are there too many enemies to fight? Is the party weakened and in need of an escape? Do you need an opponent to waste their time, spell slots, or ammo? The animated objects can be used in situations such as these.

Animating the highest number of things possible and throwing them at the front lines can force the opponent to burn through their resources, trying to reach you again and giving you a potential window of time to escape or form a counterattack.

The animated objects can be pushed against a door or in front of a path to block it. The caster can even issue the command “Defend the path,” making the objects remain there and fight till the spell ends or till they are reduced to 0 hit points. Even when the spell is over, the objects will still be an obstacle and can slow down anyone passing.

While Animate Objects are primarily used for strategic advantage and combat, they can also move objects a small distance. This can be sued to transport furniture or chests of gold outside a dungeon and onto a carriage or to move objects that cannot be customarily carried.

It can even be valid outside of combat, creating a large scene and letting the objects run amuck with a command like “Attack everything” or “Spin” you can make the chaos needed to stealthily perform tasks or just enjoy the show.

Most full casters can learn the spell Animate Object; it should be chosen with an idea in mind. The spell does not provide precise and guaranteed offensive capabilities, so choosing it must be done in combination with the rest of the character’s build.

A conjuration wizard or artificer could benefit greatly from this spell since it can be used to vastly increase their number of companions. In more general use, the spell can become a great tool if it is discussed with the party to allow for more efficient usage of the space it gives. In conclusion, the spell Animate Objects is a tool for causing chaos and scheming.

Reading tip: if you like using objects as a minion make sure to check out our Earth Elemental and Helmed horror guide!

Why animate smaller objects when bigger ones are stronger?

The different sizes of the objects can provide additional benefits. The bigger objects have higher hit points and damage but lower AC than the smaller ones. The most crucial difference between the sizes is the number; you can animate smaller objects. With this in mind, you must decide which is better for your situation. If you want a better offense, the bigger objects are more useful, but if you need to distract the enemies, the larger numbers of the smaller objects are far better.

Can you increase the range of Animate Objects?

As a sorcerer, you can spend one sorcery point to double the range of Animate Objects.