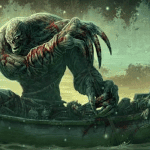 As you might have noticed, we are huge fans of undead creatures in D&D. Today; our blog features a common but often overlooked monster of that type: the Ghoul in 5e. These monsters are fun, have a ton of lore to support them, can be used in many encounters and plot lines, and are great for beginning adventurers to fight against.

In this Ghoul 5e guide, we will check out the stats of these monsters, how to use them best, and answer a couple of FAQs about them you might have. We mainly write from a DMs perspective, but as a player, you will get plenty of tips and tricks out of the article to help you beat these undead monsters.

Contents hide
Ghoul 5e Stat Block
Actions
What are Ghouls in DnD?
Ghoul encounter ideas
What is that thing lurching there?
A stereotypical graveyard visit
Evil undead army
Ghoul 5e FAQs
Why are Elves immune to being paralyzed by Ghouls?
How can Ghouls paralyze you in 5e DnD?
How many times can a Ghoul attack you in 5e dnd?
How do you kill a Ghoul?
Some final words
Related Posts:

The Ghoul is a medium-sized undead monster that has a Chaotic Evil alignment. While some types have remained somewhat good as they were in life, these ghouls are a scarce exception.

There are a couple of apparent strengths and weaknesses to this creature that you should know when you encounter it or want to run one (or a pack). First, their Strength and Dexterity are pretty decent. They have moderate modifiers, but the base is decent enough.

Their weak points are their INT and CHA. While they have enough INT to understand commands, they have difficulties carrying out multiple-step plans. In addition, both have a -2 modifier, making them vulnerable to attacks that force an INT or CHA saving throw.

As you can deduct from the stats above, the monster has a challenge rating of 1 and gives 200 XP if you kill it.

Bite: These monsters have a melee Weapon Attack that is +2 to hit with a reach of 5 ft. It only hits one creature. Hit: (2d6 + 2) piercing damage.

Claws: Ghouls have sharp and dangerous claws. These claws can be devastating due to the sheer power these undead monsters possess. The claw attack is a Melee Weapon Attack: +4 to hit, reach five ft., one target. Hit: (2d4 + 2). It deals slashing damage.

Additionally, if the claws hit, there is an effect/ If the target is a creature other than an elf or undead, it must succeed on a DC 10 Constitution saving throw or be paralyzed for 1 minute. The target can repeat the saving throw at the end of each turn, ending the effect on itself as a success.

What are Ghouls in DnD?

They are humanoid medium creatures that has the smell of decay and rot. You can see decaying flesh, rotting guts, and visible bones when examined closely. The Ghoul’s primary weapons are its sharp teeth and crude, jagged claws, which can easily rip open a human.

The monsters are known for their unsuitable hunger. Human flesh is their dish of choice, and they will risk whatever life they left in their corpses to get some. No matter how much they eat, they start looking for their next meal the second they finish eating. Due to their hunger for carrion, they often lurk near graveyards and battlefields.

Due to the fact that their claws have a paralyzing effect, often their victims are still alive when the Ghoul starts feasting on their bodies. As a result, survivors of an attack are not just mentally and physically scared but often catch diseases such as Ghoul Fever. A deadly disease with an incubation period of less than a day.

Ghouls are pack animals. This means that when you encounter one, the odds are high that there are multiple of them around. It is not uncommon that they let out a cry when being attacked, signaling to others where their location is. In addition, they actively seek the company of other creatures like themselves.

The most common occurrence when Ghouls are encountered alone is when they have recently risen from the dead. They raise from humans who deceased after Ghoul Fever.

Before we give you a few Ghoul 5e encounter ideas, let’s see what we are working with here. That way, you can quickly think about how to enhance these encounters or make up a few on your own with ease.

What is that thing lurching there?

You happen to come to a small house in the forest. A family home for the local woodcutter, just a short mile outside a small village. You first notice the rotten scent of corpses in the air coming from the house.

You see a broken window and look through it. Inside, you see multiple partly mangled and eaten corpses. Standing over one of the corpses is a ghoul wearing a lumberjack outfit. The door is locked and barraged from the inside.

Possible explanation: the lumberjack went too deep into the forest and encountered a ghoul. Escaping his life but infected with Ghoul Fever, he returned to his family, hoping to recover at home. Instead, they barraged the door in case the ghouls would find his trail of blood.

A plague has been wrecking the land, but the worst seems to be over. Nevertheless, graveyards with fresh bodies were popping up left and right. These are often found a fair distance outside the villages due to the fear of the plague infecting the living.

Ghouls have been using these graveyards as their feeding grounds. However, this undead grows bolder, looking for food with the plague now over. Since they no longer find an ample supply of carrion, a massive pack of ghouls has been going village to village, eating humans they encounter.

You can also add a condition like Heavily Obscured to the graveyard to give it an even more spooky feel!

Since Ghouls are pack creatures, it is not out of the ordinary that an evildoer will try to use them as his own army. A fun encounter is a necromancer in the sticks who has slaved away to put together a small group of Ghouls that listen to his commands. You can also add weak monsters like the Specter to this group.

When your players are in town, they get a quest to eliminate the necromancer. This can be a great quest line for players levels 1 to 4. Have them fight small fry like skeletons, zombies, and in the final battle, the necromancer, a shadow demon, and a couple of ghoul minions.

Why are Elves immune to being paralyzed by Ghouls?

Elves are immune to the paralyzing effect of the Ghoul due to their abundance of positive energy. Conversely, a ghoul’s paralyzing attack relies on their massive amount of negative energy. Due to the fact that there is such a stark difference between the energy levels and the type, the attack has no effect.

How can Ghouls paralyze you in 5e DnD?

When these creatures hit you with their attacks, their massive negative energy paralyzes their victims. However, elves are immune due to their large amount of positive energy.

How many times can a Ghoul attack you in 5e dnd?

The monster has two attacks that can be used to target another creature. These are their claw and bite attacks. So, in essence, the Ghoul can attack twice. It can use both attacks on one target or attack two separate creatures with one attack each.

How do you kill a Ghoul?

To kill a ghoul, it is advised to damage their body so much their regenerative abilities can no longer heal them. Some practical ways are thus to decapitate them and/or burn the bodies. Burning the body is always good because ghoul fever can spread from corpses.

Due to the overwhelming number of choices Dungeon Masters have regarding picking encounters, Ghouls are often overlooked. While they lack some flair and don’t have any special attacks or mechanics, from a lore perspective, they are a ton of fun.

Due to them being often found in groups, you can make them an encounter for low and medium-level players alike. They are intelligent, understand languages, and have a clear goal (eat), so they can be manipulated by evildoers and cults.

Finally, I think there is a ton of potential in the fact that these creatures can spread disease. While Ghoul Fever is not airborne, the fact that it has an incubation period of only a day and is very potent, the risk is significant for a closed-off village to get infected.

Make sure you check out our Faerie Dragon 5e guide if you want to use other monsters than gloomy undeads, this is a great pick.