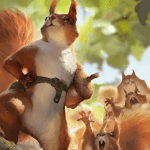 Every City within a campaign needs someone to defend it from internal and external dangers. A group of people capable of upholding the law of the land and dealing with those willing to break it.

One could easily mistake the subject being that of a player’s Party or perhaps a band of heroes grouping for a major quest. But no; Instead, this refers to the subject of this article; the simple Guard.

Contents hide
What are Guards in 5e DnD: attributes and description
Attributes
Guard 5e description
ACTIONS
Advantages and drawbacks
Advantages
Disadvantages
Best uses for a Guard in a Campaign
Medium Sized Patrols
As part of a larger group
As passive Exposition
Advice and final thoughts
Guard 5e FAQ
Why are the Guards in 5e so tough in a fight?
Should I allow a Guard to become a NPC that accompanies the Party?
Can I use the Guard stat block for other NPCs?
Related Posts:

What are Guards in 5e DnD: attributes and description

Guards include Members of a City Watch, sentries in a Citadel or fortified town, and the bodyguards of merchants and nobles.

Although this enemy is relatively weak on its own, they are more than capable of piling onto a single target and dishing out damage. This, paired with their low HP, makes them excellent cannon fodder for a Dungeon master to use during a combat encounter to not only distract a player from more significant threats but also whittle their health down if they have the target surrounded.

Their Primary weapon, a simple spear, can be used as either a Melee Weapon or a Ranged Weapon that can be thrown. This gives a Guard or knight in 5e an extra bit of usefulness, as if they are dealing with a mostly melee combat party, then these monsters can sell extra bits of damage before the player characters close the distance. Although they are better suited for melee combat than ranged, Guards are at least still capable of doing both.

This is more of a passive advantage than a combat one; the Guards can be any species that can fit into the position, which is up to the Dungeon Master. This permits the guards that the Dungeon Master wishes to place in certain areas to match the area by being the same species as the general populous.

There is also a combat-oriented advantage to this since the Dungeon Master can pick species that are generally exceptional fighters and use them as the guard species. This requires a bit of homebrewing to make it happen, but it will improve the Guards just a little bit more, depending on what the DM chooses to use.

Although their HP is meager (which will be discussed in the next section), the AC of the Guard is pretty impressive compared to other monsters in its CR class. The Guard has the highest AC out of any of the 1/8th CR Monsters, making it capable of going toe to toe with a decently strong party.

This monster is given a shallow HP pool to match the high AC the Guard has (for a ⅛ CR monster). Now, this HP pool is nothing to shake a stick at, as even though it is a measly 11 Hit Points, it is one of the top 10 highest monsters organized by HP.

It is only outclassed by the Giant Crab and the Camel, with their hp being 13 and 15, respectively. This is still cannon fodder material when thrown up against a party, but it still means they can hold their own a little bit longer than most monsters of their CR.

Now with most, if not all, monsters a party can encounter during a campaign, having a higher Ability Score gives the creature with it a better chance of succeeding in saving throws. However, the Guard has a reasonably average ability score selection, giving them either flat rolls or +1 modifiers to their rolls.

This hurts the Guard, as it means that the only way they can pass certain saving throws truly is with luck, as opposed to their ability score modifier saving them from failing the check.

Best uses for a Guard in a Campaign

If placed against a party that is either Low Level or just about to reach the double digits for their levels, a patrol of anywhere between 6-12 Guards can pack a punch. With enough to surround one or two players, and some acting as ranged units to hit the ones not being focused on, these Guards can be seen as either an annoyance or a proper threat.

This can also be even more dangerous if a Dungeon Master has slightly homebrewed the Guard to include some attributes from the species that the Guard is, such as an Orc or Elf.

As part of a larger group

Embracing the nature of cannon fodder is one way to utilize a Guard if in case the Dungeon Master decides to mix things up with the hostile groups the party encounters.

Adding in Knights or Veterans as part of the group can not only give the Party more dangerous targets to deal with but also allow said Knights or Veterans a chance to close in and attack if the Party is too busy dealing with the weaker Guards. This can throw a medium-leveled party off their Guard, especially in an ambush-style attack with the Guards leading in the front as bait.

Whether it is after they surrender during a combat encounter or it is purely through a passive conversation, a Dungeon Master can use a Guard to tell a story to the Party.

Of course, the information the Guard gives is solely up to what is needed for the given situation and progress of the Party. Still, either way, having a Guard give them information can help give them experience outside of the battlefield.

With how modifiable the Guard monster can be, there are many, many more uses and abilities that can be added and changed on the monster to fit a Dungeon master’s needs.

Whether that need maybe to give a party some light combat to keep them from getting bored to continuing the campaign’s story, These Guards can be utilized for anything the Dungeon Master can think of for them!

Why are the Guards in 5e so tough in a fight?

It is mainly due to their AC, whose 16-to-said AC prevents hits that’d naturally kill an enemy of their CR in one hit from connecting. In fact, such a high AC gives players more of a challenge.

Should I allow a Guard to become a NPC that accompanies the Party?

You can indeed have a Guard tag along with the Party, should they need to/wish to have one. In terms of what they should be used with, the base Guard Stat Block can be a start, though modifications to them should be done if needed.

Can I use the Guard stat block for other NPCs?

If there are townsfolk around that the Dungeon Master feels would be involved in a fight or a defensive position, then they can use this stat block for them and explain that they are off-duty militiamen called to action when needed.