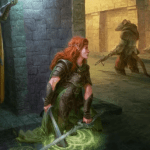 Time; is something that everything in the universe must follow, even if humanity is the only species to keep track of it indeed. Even Dungeons and Dragons have the concept of time as a fundamental element of the universe and all the planes of existence.

An idea that involves time within D&D also holds the concept of controlling time in some way. Thus, the Clockwork Amulet was created to aid the wearer in such control, even via a single aspect.

What is Clockwork Amulet 5e: mechanics and requirements

This copper amulet contains tiny interlocking gears and is powered by magic from Mechanus, a plane of clockwork predictability. A creature that puts an ear to the amulet can hear faint ticking and whirring noises coming from within.

When you make an attack roll while wearing the amulet, you can forgo rolling the d20 to get a 10 on the die. Once used, this property can’t be used again until the next dawn.

Magic items within DnD typically require Attunement and the usage of an attunement slot for the wearer/user to take advantage of their magical abilities. However, the Clockwork Amulet does not need the wearer to use such a slot, allowing them to benefit from its power without using one of those slots.

It also allows the wearer to save those slots for more powerful magical items that would require Attunement, such as a powerful set of armor, a weapon, or another miscellaneous item that would usually be worn as jewelry.

To have this as an advantage may seem rather strange, given how the lower the rarity is on a magical item, the weaker it tends to be regarding its abilities. However, finding the item in shops is more manageable than other magical items with higher rarities.

Furthermore, this gives the players a chance of being able to grab this very early on in the campaign and to be able to use it in more combat encounters than if they found it later on.

Although Dungeon Masters tend not to hold the weight of an item against a party, as over-encumbrance can be pretty tricky to sort out both as a DM and a player, the Clockwork amulet is officially listed as having 0 lb or at least being less than 1 pound in weight.

Having such a lightweight to the item means that the player who finds it, regardless of the DM’s ruling on Encumbrance, doesn’t have to worry about it weight them down if they take it and/or wear it.

Although this is a common situation with most items such as this, the Amulet can only be used once in a situation before the user has to wait until the next dawn before using it again.

This can be slightly worked around in the event the wearer is fighting in the early hours of the morning and happens to use the Amulet before the next dawn comes, then can use it again in the same fight since the new dawn has arrived. Of course, this usage is completely up to DM discretion and ruling, plus it is entirely circumstantial to find oneself in a situation like this.

Used as written and Intended

Although the most straightforward example, using the Amulet’s ability as intended can be very useful in the middle of a combat situation. One use, after the roll of the attack dice, the result can be replaced with a flat 10, plus whatever modifier one may have to hit an enemy.

This can help with any attacks that could have hit if the result was higher, but to a point where a ten would be the difference needed to have an attack connect.

Back to Back in rare cases

As mentioned previously in the Disadvantages section of this article, the Clockwork Amulet 5e can be used in a very specific scenario. For example, if someone was fighting in combat just before the next dawn, is when the sun comes over the horizon. Then the user could use the Clockwork Amulet, ask later on if the sun has come up, and then use the Amulet again.

This would be because the Clockwork Amulet would have been recharged and useable again for the next instance. Of course, this mainly depends on a fight at such a critical point, along with the Dungeon Master ruling it as possible.

This use is, by all accounts, the strangest one that could be used if the Dungeon master permits it. Since the Amulet has no real weight to it, along with no required attunement slot, a person could collect multiple Clockwork Amulets and be able to use its effect several times.

The limit of how many times it could be used in this manner is restricted by how many amulets the user wears. The “until next dawn” cooldown of the ability would still exist, but having several would also permit the user to work around it until they use all of them. This is something that, again, the Dungeon Master will have to give the go-ahead for, so please ensure your Dungeon Master is fine with using the Amulet this way before doubling down on it.

The Clockwork Amulet 5e is a magical item that should be grabbed sooner rather than later. Its ability, although useable once per day, is still a very helpful tool to have in the middle of a difficult fight.

This is especially true if someone’s modifier to hit an enemy is more than capable of making the 10 hit an enemy combatant. Combined with the lack of a needed attunement slot and the ease of finding the item, a low-level PC could easily take advantage of its usefulness.

It is still usable past the PC, which has a low level and a quick time advantage even when a player is level 20 in a campaign. Overall, it is definitely worth the 400 Gold required to own it.

Can any class use the Clockwork Amulet 5e?

There is no class restriction on this artifact, thanks to the lack of necessity of an attunement slot, which would sometimes be class restricted.

What if the Dungeon Master doesn’t allow multiple Clockwork Amulet 5e to be worn?

It is still very useful, with only a single amulet to a character’s name. If they didn’t allow them to be worn on the same person but permitted them to find multiple versions, then the person who collected them could give them to the other party members to use themselves.

What’s the best place to search for the Clockwork Amulet 5e?

Jewelry shops, general stores, and randomized loot within a dungeon can very easily yield the Amulet as a piece that can be found or bought by the party.