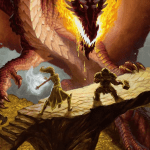 The concept of Dragons has always been a staple part of DnD. However, there are varying types of Dragons and, in turn, different types of species that are similar to Dragons.

Today, we will go over the Half-Dragons, specifically the Half-Red Dragon Veteran.

Contents hide
What Half-Red Dragon Veterans are: attributes and description
Attributes
Half-red Dragon attack description
Advantages and drawbacks
Advantages
Disadvantages
Best uses for Half-Red Dragon Veterans in a Campaign
A small part of a larger group of enemies, such as Bandits.
A squad consisting of four of them working as a single unit.
As a single enemy to gauge the combat capabilities of the party
As the main type of enemy encountered during the Campaign
Advice and final thoughts
Monster FAQ
How is a Half-Dragon any different from a Dragonborn?
If a Half Dragon can be created through a ritual, does that mean a character could become one?
What is the best environment for a party to encounter a Half-Red Dragon Veteran?
Related Posts:

What Half-Red Dragon Veterans are: attributes and description

Fire Breath (Recharge 5–6): The Veteran exhales fire in a 15-foot cone. Each creature in that area must make a DC 15 Dexterity saving throw, taking 24 (7d6) fire damage on a failed save, or half as much damage on a successful one.

Multiattack for this Monster gives it the ability to be able to use more attack actions against an opponent or more than one opponent depending on the chosen weapons selected by the Monster.

This means that not only does this give the Monster a higher chance to hit a party member, but a higher amount of damage is done per turn, depending on whether their hits connect.

When building Medium Difficulty or Higher encounters, which might have more Half-Red Dragon Veterans involved in the battle, having them die off super quickly would make them seem less dangerous than they can be. So, by having them in plate armor, the Half-Dragons can cause characters to miss their attacks more often unless they are at a high enough level to surpass the 18 AC the Monster has.

Through the Crossbow they are equipped with and their natural Breath Weapon, the Half-red dragons can attack enemies within Melee Range or 5 ft. from them or at a 15 by 15 ft. Cone.

This cone goes up to a maximum of 400 Ft. away at a target of their choice (Max Range of Breath Weapon to Max Range of Heavy Crossbow Respectively).

Due to the published description of what is possible for the Half-red dragons to be able to use their Multiattack for, Ranged Attacks are not able to be used as part of their attacks. This doesn’t limit their combat capability by much.

However, it limits the number of people they can attack if the Dungeon Master running the combat encounter wants to attack members of the party that are out of the melee range of the Monster.

The Ability Scores of Intelligence, Wisdom, and Charisma are all relatively low at 10s and 11, meaning that if they have to make a saving throw with either one of these ability scores, there is a high chance of them failing the save.

This can be seen as a benefit to the players, as this means spells like Charm Person or Dominate Monster can be used without any real fear of the save being succeeded. Unless the DC for the spell in question is low enough to give the Half-Red Dragon a decent chance at success.

Best uses for Half-Red Dragon Veterans in a Campaign

A small part of a larger group of enemies, such as Bandits.

If used against an average-sized mid-level party, ranging from level 9-12, then the Half-Red Dragons can be added as a small part of a bandit group meant for them.

One or Two of them should be more than enough for such a party, especially if they are paired with a Bandit Captain

and a decent amount of Bandits, 3-6 at most. That way, not only are there enough of them to be considered a proper threat alongside the bandits. On top of that, there aren’t too many of them to where the combat encounter becomes too difficult for parties to handle at a lower level.

A squad consisting of four of them working as a single unit.

Designed to be used against a more end-game Party from Levels 15+, Four of them can be quite a difficult encounter for an average-sized party around those levels. They can also lead to an even more dangerous foe, such as a Mini-Boss that had been prepared for the party to defeat past these four.

Since it’s just the same form of Half Dragon, the grouping of four of them doesn’t add anything different from the others outside of their HP unless the Dungeon master has decided to modify/homebrew the Half-red dragon’s stats to better suit their Campaign.

Thanks to their Challenge Rating of 5, a single Half-Red Dragon is more than an equal opponent to a party beginning to hit the more dangerous, harder-hitting enemies, which should be at around Levels 5-8.

As such, giving the entire party this lone Monster should give them a proper taste of what kind of enemies are ahead of them, especially if the Dungeon Master plans to make the enemies they face. Their combat encounters are more difficult as time goes on within the Campaign’s story.

As the main type of enemy encountered during the Campaign

Finally, suppose a Dungeon Master wants to run a Homebrew Campaign, with either a specific Dragon or other forms of Dragon Based Species as the main antagonist of the Campaign. In that case, they can use these as the main creature the party would fight against throughout the Campaign.

Of course, it would most likely be a campaign starting at around Level 4 and up to Level 6. Regardless, these creatures would allow the party to immediately understand that this Campaign, and the enemies within the setting chosen by the Dungeon Master, is difficult but rewarding to complete and conquer.

Overall, the Half-Red Dragon Veteran can be quite a dangerous foe, whether on its own, paired with other monsters of different kinds, or even put together with additional Veterans.

It’s best used for players anywhere between Level 6 and 20, depending on how exactly the Dungeon Master wishes to use them.

Their different available weapons, their natural breath weapon, and their heavy Crossbow allow the Half-Red Dragon Veteran to attack members of the party either up close and personal or from afar.

How is a Half-Dragon any different from a Dragonborn?

There are several differences between a Dragonborn and a Half-Dragon. Dragonborn normally do not have a tail. While Half-Dragons do, and the creation of a Half-Dragon is either through either an act of recreation between a human and a polymorphed dragon or in a magical ritual. However, the ritual is rarely done to create a Half-Dragon in this manner.

If a Half Dragon can be created through a ritual, does that mean a character could become one?

At the discretion of the Dungeon Master, yes. However, this would be seen as rather overpowered to give to a low-level character and could be done as a significant quest for that character to work towards acquiring and preparing the ritual for use.

Other methods that can be used for a Player Character to become a Half-Dragon is through serving Bahamat, bathing in the blood of whichever type of Dragon the player character wishes to be the form of Half-Dragon they become. Or they could even be the result of a powerful spell gone awry.

Save for the final Method is more meant for either the beginning reasoning for a PC being a Half-Dragon or NPCs. All of the listed methods can be used by a Player Character as a quest to work towards completing. Then they can become a Half-Dragon through much time and effort.

What is the best environment for a party to encounter a Half-Red Dragon Veteran?

This depends on what kind of Campaign is being run, as different campaigns can see different environments for them to be placed in. For example, if a Dungeon Master has decided to include Tiamat and Bahamat in their Campaign; then his exceptional cult fanatics of Bahamat have been rewarded by him by being turned into Half Dragons