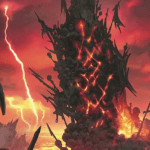 Taking the energy from the universe to form a stroke of lightning, the level three wizard and sorcerer can cast a bolt of fury down a line of enemies. This evocation spell reaches a range of 100 feet, making it a powerful spell to zap those who are against you.

What is Lightning Bolt 5e: mechanics and requirements

A stroke of lightning forming a line of 100 feet long and 5 feet wide blasts out from you in a direction you choose. Each creature in the line must make a Dexterity saving throw. A creature takes 8d6 lightning damage on a failed save, or half as much damage on a successful one.

The lightning ignites flammable Objects in the area that aren’t being worn or carried.

At Higher Levels: When you cast this spell using a spell slot of 4th Level or higher, the damage increases by 1d6 for each slot above 3rd.

In a Tight Spot

In many adventures, enemies may be found following your tail; using the Lightning Bolt spell is great to wipe them all out, given its range. Furthermore, due to its high damage dealing, it is guaranteed that enemies would take damage from this spell or at least half of it! This is especially useful if you find yourself in a narrow space such as a tunnel or hallway, as the spell can cover a lot of ground throughout that area.

Light Down the End of the Tunnel

While out and about in your adventures along with your party, you may encounter circumstances wherein there are blockages along your way. May it be a road blockage or even a fallen tree, as long as the objects are flammable, you may use the Lightning Bolt spell to clear it off. This is useful if you want to create a straight path so that you and your party members can easily pass through.

Do you see enemies approaching your territory? Or in need to intimidate anyone who threatens you? The Lightning Bolt spell is just for you if you need to show someone who’s boss. With a mix of great damage and range, you can scare off a couple of enemies while wiping some out. Even if you don’t want to harm the person going up against you by using this spell, it can surely intimidate anyone with everything surrounding them set ablaze.

If you identify as the chaotic type or just plain evil, this spell can surely be something that may interest you. With this, it grants the spellcaster the ability to light up flammable objects in the area except for ones that are carried or worn. This can be very useful if you want to burn enemy hideouts or even a cult village. But, of course, it’s up to you and your moral compass on how you’ll take measures in your own hands.

When you have a level three spell, it can be a tough decision to choose something worthwhile. From Fireball to Dispel Magic, there are many good options, and the Lightning Bolt spell is one of them.

This may be just for you if you need a spell that deals a massive damage output with a precise Area of Effect. But don’t let the battlefield be the only limitation for you to use this because there are creative ways to utilize this with how it can ignite surrounding objects.

Of course, like any other spells like this one, it’s important to know where you’re aiming to avoid any casualties. Overall, the Lightning Bolt spell is flashy and can surely strike fear in your future enemies.

Should I choose Fireball or Lightning Bolt for my next spell?

Do the targets in front of the Lightning Bolt spell provide half cover for the line?

Technically yes, because according to the 5th Edition System Reference Document,
“A target with half cover has a +2 bonus to AC and Dexterity saving throws. A target has half cover if an obstacle blocks at least half of its body. For example, the obstacle might be a low wall, a large piece of furniture, a narrow tree trunk, or a creature, whether that creature is an enemy or a friend.”
This means that enemy targets can be shielded by any targets in front of it, granting them half cover.

Is there a way to increase the range of Lightning Bolt?

No, a spellcaster cannot increase the range of the Lightning Bolt spell since there is no mechanic in Dungeons & Dragons 5th Edition available.

Can you use the Lightning Bolt spell underwater?

Yes, you can. This is because the spell’s damage dealt is considered to be magical. Thus, the spell deals magical lightning damage, and the spell’s description does not say otherwise; a spellcaster may be able to use this spell. But it may be advisable to consult your Dungeon Master if this is an acceptable way to use this spell.

Does the Lightening Bolt spell cause extra damage to creatures in water?

Spells with lightning damage, such as the Lightning Bolt spell, do not behave differently in water since the spell’s description does not state any interaction between it and water.