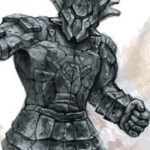 If you are looking to spice up your DnD nights, the stone golem is the perfect monster to challenge your players while having a ton of fun. The possibilities are as good as endless with this living pile of rocks as long as you are creative.

What are Stone Golems?

Stone golems can manifest in any form their creator desires. For example, some are sculpted as tall beasts, while others are frail humanoids. However, most creatures have human features, such as two legs and a set of heavy arms. Moreover, ancient stone golems bear the characteristics of giant beasts.

Stone golems are an ancient art. The build of stone golems begins with its body, requiring abundant labor. These creatures are not cheap. Ages ago, the price of building this monster was sixty thousand gold. A commoner couldn’t afford a stone golem. The cost comes from labor. Creating a stone golem is an excruciating task. They recruited laborers such as stonemasons and dwarves to etch golems from solid stone blocks. This ritual takes months and occasionally even longer.

A lonesome creator can build a stone golem. First, however, they must use “Manual of Golems” or “Tome of the Unicorn.” Even in this case, the sole practitioner often enlists architects and seasoned artisans to design their creations.

After their conception, stone golems require life essence. Therefore, their creator needs to infuse the golems with a spirit from the Elemental Plane of Earth. After the ritual is over, these nimble beasts can begin serving their grand duty. They granted stone golems with everything except a mind of their own. There are no memories, personality, or backgrounds. Because of their constructed nature, golems don’t need to sleep, drink, eat, or breathe.

The Duty of a Stone Golem

A stone golem receives demands from its creator and nothing more. They are obedient when given a command. You can count on a stone golem to perform orders flawlessly. When these attendants get conflicting directions, you will see the golem alternate between the two. Whether the tasks are immoral or improbable, a stone golem will follow through with prose. The creator can use a talisman such as an amulet or other item. The talisman allows the possessor to have complete control over the golem. As a result, the possessor can still control the golems after the creator dies. When their creator perishes, they will continue to follow their last wishes for eternity.

If they can’t execute their order, they react aggressively or freeze in one spot. Stone golems have no sense of morality or alignment. They can only perceive how to follow orders. In addition, they do not require food, water, or air. Finally, stone golems cannot speak, though they comprehend their creator’s native tongue.

Stone golems are ageless guardians. They do not perceive time nor face the backlashes of it. They can guard tombs and sacred treasures for an eternity without qualms. These creatures do not react to most ordinary attacks, and only potent spells affect them.

Stone golems have a multitude of impervious abilities. For example, they have immutable formability, so you cannot alter their form with any spells or effects. Furthermore, their magic resistance ability grants stone golems a saving throw against magic such as spells. In addition, all of their weapon attacks are magical because of their magic weapons ability.

Their actions are something to gawk at. Stone golems have three actions in total; multi-attack, slam, and slow. The slam attack is a melee weapon attack. They need to roll 10+ to hit. If the attack lands, you will face bludgeoning damage of “19 (3d8 + 6).” Their multi-attack creates two slam attacks. In continuation, the slow charge action targets all creatures within ten feet. All targets must roll a saving throw of DC 17 Wisdom.

Their stats are what you’d expect from a typical brute. They have high constitution and strength stats. However, their dexterity and intelligence are extremely low. Don’t expect them to pass any charisma checks either; their lowly charisma stat is “1 (-5)”. In addition, they have a natural armor class of 17. This means that stone golems have exceptional protection. Furthermore, they are very durable; their hit points total “178 (17d10 +85).” Lastly, they have a speed of “30ft”, making them average.

The difficulty of fighting this monster comes down to their immunities. Stone golems have extraordinary immunities, which makes fighting them frustrating. These creatures have damage immunities against poison, psychic bludgeoning, piercing, and slashing from non-adamantine weapons. They cannot feel charmed, exhausted, frightened, paralyzed, petrified, or poisoned. Their senses include dark vision (120ft) and passive perception 10.

As passive creatures, stone golems will never target or hunt for you. You will rarely stumble upon these creatures by accident. However, don’t be frightened when you ‌encounter one of these nimble beasts. The creature sit at a challenge rating of ten. They classify as medium threats. Stone golems are creatures that a party can defeat with efficient strategy.

Run for the Hills

However, if your team is not up for the battle, you can leave the scene with minimal resistance. Stone golems rarely have a purpose that isn’t protection. Therefore, if you evacuate from the area, they will not stop standing guard to chase you.

Your group is likely not to encounter a stone golem by chance. You want the sweet loot that they’re. Guarding! This is why I am here to give you several battle tactics that will help you reclaim your treasure.

While battling this contruct, its attack deals heavy damage. Therefore, your team will need an abundance of healing… This is where poison clouds may come in handy. Stone golems are immune to poison. However, the clouds can block its vision while your team works on recovery.

Stone golems are far from intelligent. These creatures have an intelligence stat of “3 (-4).” Therefore, it wouldn’t be difficult to outsmart a stone golem. However, don’t presume this is going to be an easy battle. That would be a grave mistake and would probably lead to the demise of your party. One tactic goes: lure the golem and shut it in if there is a door nearby. I know that sounds simple, but that’s because it is. You can then use magic boxes and the eye of time to freeze it behind the door.

Another battle tactic your party can use is having your druid use a stone shape to trap the golem. Afterward, you can defeat the stone golem using the alchemist’s fire. Alternatively, your team can go about your business after confining him. Using this tactic would not work in all cases. This method assumes you’re in stone terrain.

In addition, your team can use the shove action until you guys knock the stone golem down. You can perform this by knocking the golem prone and using grapple. If the entire team is grappling together, you will have the advantage. The monster cannot stand until set free from the grapple. This is because standing up requires half of your movement. Grappling reduces activity to zero. Therefore, the stone golem cannot get free until it escapes the grapple.

A Dungeon Master’s Guide to the Stone Golem 5e

Stone golems can spice up any dungeon quest. So naturally, it’s difficult to resist the opportunity to throw one at your party, so I’m here to tell you the perfect moment for incorporation.

You wouldn’t see one of these on a trip to the market or rushing to get to class in Strixhaven. Instead, we. can usually find these brutes in sealed tombs or flanking the gates of lost cities. In addition, you can find them in caves or guarding bridges.

The perfect time to introduce a stone golem is when the gang searches for hidden treasure or comes across a private area. If you want to spice things up, you can embed the treasure into the golem’s body.

Regarding an unprepared party, it would be ideal to equip them with weapons before the battle. For example, they can find a carcass of a previous trespasser holding adamantine weapons. If you’re hesitant to provide your team with tools, remember that the game is supposed to be fun. Your players likely won’t be in a merry mood if they’re near death by the end of the battle.

If your stone golem needs some healing, it can receive a repair damage spell from an arcane spellcaster or artificer.

Even though they are ‌straightforward, they can be an entertaining random encounter. These constructs have an exciting portfolio. Therefore, golems force your party to be creative. When on the hunt for forbidden treasures, introduce a stone golem. Who doesn’t love a big ole brute?