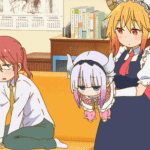 Are you looking for some excellent anime that features Mythical Creatures and magic, action, and adventure elements? That is one of the most requested themes, so keeping that in mind, we have already compiled a list of ten anime about mythological creatures.

Mythical Creatures are ancient supernatural entities with exceptional powers that no one could imagine in today’s date. So let’s get right into the blog now that I’ve introduced you to Mythical Creatures.

Blood: The Last Vampire is a horror film containing action, mystery, and supernatural elements. Despite its short runtime of just 48 minutes, this film offers a lot to its viewers.

The world is quivering in terror because a new type of vampire called Teropterids has appeared, and he cannot be killed unless his head is slain with a unique Katana. Our MC, Saya, possesses this unique Sword, and being a vampire, she is the only one capable of killing him.

Our MC swears to defeat this mythical creature, and she is a strong lady who never takes her words casually and always follows through on what she promises. This anime movie introduces

us to a whole new world of supernatural powers, and it was also one of the most awaited films of the early 2000s. So, what are you waiting for? Watch this film right now to witness our unforgiving MC’s adventures.

Burn The Witch is an action-fantasy anime that surprised thousands of people with a wonderful plot, crude comedy, and many other things; however, Otakus were upset with it after its finale. This anime only had three episodes, which was the only reason why many people were unhappy with it.

The anime is set in London, where unknown dangerous beings and dragons are wiping off most of the population. These mythical creatures can only be seen by a chosen one who lives in Reverse London.

Wing Bland, a gang of two witches fighting to save London from these dragons, is introduced at this point. The story gets even more fascinating when we see the oddest couple from anime history, Noel Niihashi and Ninny Spangcole. Do watch this anime if you are looking for anime about mythical creatures.

InuYasha is one of the fantastic anime that features time travel and many other elements such as fighting, comedy, and adventure.

The plot centers around Kagome Higurashi, a 15-year-old girl who accidentally falls into a well and wakes up 500 years in the past. It’s the Sengoku era, and the place she’s been thrown into is full of supernatural forces fighting one another. After gaining control of the situation, she calmed down a little and began exploring the area independently, which is when she encountered our MC, InuYasha, a dog-human hybrid.

She first saw him as a monster, but they eventually became friends and embarked on their quest to find the Shikon jewel, a magical jewel that provides tremendous powers to its wielder. However, their journey will not be as simple as it appears. All of the demons are already on the hunt for this jewel.

This anime’s plot revolves around a 14-year-old spoiled brat who is already sure that he will live a dull existence for the rest of his life. But we never know what nature has in reserve for us, and one day, our MC’s life was completely changed when he gave his life by jumping in front of a car to save a child.

As a result, he died, but Koenma, the heir to the spirit realm’s throne, offers Yuusuke the chance to regain his life by completing a series of challenges. He is now tasked with eliminating evil presences that threaten the Earth, which he will undoubtedly do with the assistance of Botan.

Moving up, we have Kobayashi-san Chi no Maid Dragon, a fantastic slice-of-life anime with perfectly blended fantasy elements.

How would you react if you opened your flat door and saw a massive dragon in front of you? You’re going to pass out, right? That’s precisely what happened to Kobayashi when she returned home from work and opened the front door to see a dragon looking at her. Surprisingly, the dragon later transformed into a young, energetic girl who introduced herself as Tooru.

She later revealed to Kobayashi that they had previously met and that the mythological creature had been to her house because she had invited her. After that, Tooru promised to work as a maid by doing all of the chores alone to repay her stay at Kobayashi’s house. Kobayashi initially regretted her decision, but after witnessing Tooru’s supernatural abilities, she was convinced to let her stay at her house. From here on, the hilarious adventures of Tooru and Kobayashi began.

Gate is a fantasy-adventure anime that many people love because of its action and military components. Furthermore, it is regarded as one of the finest because Isekai’s perfect touch.

The anime revolves around the story of Youji Itami, a military commander and Otaku, and how a GATE changed his life. He went to Tokyo for a meeting one day, but something happened along the way that changed his life forever.

A massive weird gate rose in front of him out of nowhere, and as he gazed at it, several mysterious beings emerged and began attacking the city.

Everything was being destroyed; however, thanks to Youji, everything was restored, but only for a short while. Fearing that these mythological creatures may reappear via this gate, the JSGF task force dispatched Youji and a team to investigate this peculiar gate and learn its mysteries.

Cross Ange is an action anime that shows how society can be manipulative and how people betray one another.

Even if the world is advancing rapidly, people are still labeled as applicable or worthless by higher authorities. Angelise Ikaruga Misurugi is a Misurugi Empire princess and the worst princess ever considered. Her kingdom is terrific, and everyone lives happily, but that’s the only side of the story. Mana and Norma are the two groups of people that live here. Mana lives happily since they are seen as excellent, while Norma lives in a living hell, and the reason for all of this is Angelise.

She treats Norma as a slave and only sees them as an outcast, but here’s the fun part. She is a Norma who can’t do anything and is entirely useless. How would the people who live here react if they learned the truth about her? I hope they teach her a valuable lesson.

Yona of The Dawn is a rom-com anime with wonderfully blended action elements that have captivated audiences despite having just 24 total episodes. It is one of those few anime that represents women’s empowerment. Isn’t it amazing to see a strong Female Lead take command of the situation? In my opinion, it is the most satisfactory experience.

The plot of this anime revolves around the story of Yona, a princess of the Kouka Empire who was deceived by his lover, who was also her cousin. She loved him and did everything she could to marry him, but when things started to turn in her favor, his lover betrayed her and murdered his father to steal the kingdom.

Luckily, she survived and escaped with the help of her bodyguard, Hak. With the pain of losing her father and being deceived by the love of her life, she has embarked on a quest to find the mythical protector dragons that can assist her in avenging her father’s murder.

Death Note is an action/fantasy anime filled with thrillers and suspense. Unfortunately, its plot is pretty messed up, and with a sad ending, this anime is one of the thousands.

This anime tells us the story of Light Yagami, Japan’s most intelligent boy and a peace activist whose life was turned upside down when he met Ryuk, a mythical creature regarded as the God of Death. Ryuk was a Shinigami who dropped a book called Death Note into the human realm to pass his time.

Our MC stumbled upon this book, and the moment he picked it up, his world was flipped upside down. This book is not just any ordinary book; it can kill anybody. Now Light can kill any person he wants simply by writing their name on it. With a strong sense of justice, this book will cause significant issues for our MC. I strongly recommend you to watch this anime since its exciting storyline will blow your mind.

Without mentioning Naruto, an action, adventure, and martial arts anime, our list of the best anime about mythical creatures would be incomplete.

The plot takes us to the Hidden Leaf Village, where everyone is living a happy life until a mythical creature known as the Nine-Tails appears and begins to destroy the village. Everyone did all they could to stop it, but no one could. That’s when the Fourth Hokage decided to put this beast to rest.

He fought it until he could take it down and sealed it inside Naruto, his newborn child. The plot revolves mainly around Naruto, the most active child in the village who entertains everyone with his jokes. Later, he made some new amazing friends, and with the support of his masters, he promised to be the Hokage of this village so everyone could recognize him.