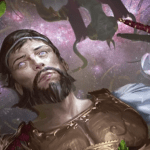 Campaigns are mostly built on two sides of a role-playing coin; Passive Roleplay and Combat Encounters. In those Combat encounters are various creatures that a Dungeon Master can throw at a party of any level or size to give them a thrilling experience, along with a sense of danger and threatening ambiance to their world.

However, some creatures are better suited for certain parties than others, which is what this List will be going over today. Therefore, this list will primarily focus on Monsters that are best suited for Low-Level Parties ranging from Level One up to Level Four.

The Bandit is one of the most commonly seen enemies within many forms of Medieval Media. From Skyrim to Dungeons and Dragons, the Bandit and the many different types of Bandit, like the Thug in 5e, that a Dungeon Master can utilize are a type of monster. The Bandit can be used in all sorts of settings, regardless of the location or story beats.

These can even act as the first Humanoid “Monsters” the Party can come across during a campaign. Even the Bandit Captains within DnD can be one of the first Boss Encounters a Dungeon Master makes for their low-level Party to face off again. Regardless of whether it is to finish a side quest to earn themselves more to spend elsewhere or to progress the primary story of the Campaign overall.

The Oozes are a creature that tends to exist in darker, damper areas of exploration that could be available to the Party to tackle. For example, its appearance could help it hide within or on the grey brick walls of a sewer or a dungeon the Party is traversing for whatever reason may have brought them there.

In addition, some Oozes, such as the Grey Ooze, are capable of corroding Metal, meaning the Party has to think a bit more tactically when facing off against such a creature.

Finally, since Oozes typically move rather slowly, this introduces the concept of flanking enemies during a combat encounter and the benefits of pulling off said flanks.

In a similar location to the Grey Oozes, the Giant Rats can easily be found in a Damp and/or Dark area that would be counted as a generic dungeon or a sewer system running underneath a sprawling city that the Party is currently helping.

These small disease-carrying vermin usually travel in packs, which would introduce the Party to pack tactics and how to combat scenarios with multiple enemies facing off against the Party at once. This works especially well if the enemy has the numbers advantage.

Unfortunately, like many that should be expected to be found in the early game of a campaign, these creatures are relatively weak. However, the existence of the Rats can very much be an easy quest starter, especially if one of the Inns that the Party is staying in has a Rat Problem, giving the Party something to do on the side instead of sticking to the main story all the way through.

A similar staple to Fantasy Media like the Bandits that were previously mentioned, Goblins are one of many monsters commonly referred to repeatedly in fantasy settings. However, unlike the Bandits and the Orcs (which will be discussed later), The Goblins have their combat style, should the Dungeon Master wish to implement them.

The Goblin can use stealth tactics of their own, along with poisons, and function as hit-and-run attackers within a city. However, unlike the Bandits, a good amount of Goblins have a relatively high AC due to the various equipment given to them to fight against the Party.

Despite that, the Goblins have a Low Health Pool and could be used to introduce poisons and more intelligent forms of combat to the Party outside what they have experienced thus far.

Animated Items have a wide range of what those could actually be in combat encounters. From a simple sword flying around trying to slash at the Party to a full suit of Living Plate Armor, these ghostly beings can ambush the Party incredibly well due to their inanimate forms.

Not only that, but these beings are Immune to certain damage types, such as poison or psychic damage, along with most conditions that could trip up an enemy and aid the Party in some way. These Immunities help the Party stay on their toes and could even be another Boss Encounter, should the Dungeon Master choose to use Living Armor as such.

When it comes to a good amount of the beginning enemies that a party can face, they tend to keep to themselves and attack one, with no genuine abilities outside of their movement and basic attack to speak of.

However, the Mephits change that outlook, as they are more than capable of summoning more of their kind into battle and can explode on death, making them just as dangerous in their final moments as they were when the Party was facing them. In addition, these creatures have a spellcasting ability to add even more variety to the mix.

The knowledge gives them a more comprehensive range of things they can use to attempt to kill the Party while also serving as an introduction to creatures with extra combat abilities in encounters that they can utilize whenever they choose to.

One of the first Undead creatures that a 1st level party would most likely come across, the Zombie exists in many forms, similar to the Bandits and the Animated Items.

Holding an Immunity to Necrotic Damage, these Zombies could serve as the introduction to Undead creatures within a campaign, as even by themselves, Zombies can be quite a formidable opponent in a combat encounter thanks to both their High Health Pools and Undead Fortitude.

According to the DnD Lore within Published Media, the Ancestors to Humans, the Grimlocks, were once the servants to Mindflayers long ago but now are left out to thrive in the dark as hunters of any underground environment the Party happens to be traveling through. While other creatures before this one were able to introduce resistance and immunities to the Party.

The Grimlocks could be able to introduce how certain conditions and environmental changes can change a battle in their favor. As shining light upon them causes them to back off and gives the Party a chance to flee the encounter, should things get too hectic for them?

While Zombies serve as the introduction to Undead creatures, Ghouls are a step up from them, as they are more challenging in a fight than their weaker undead kin.

Capable of paralyzing non-elvish beings with their claws and having a certain aptitude for poisoning their prey, these monsters can turn a Night-Time undead encounter into a fight for their life if they are deployed properly within an encounter.

Holding an extensive lore within the Monster Manual, the Blights hold various plant-based forms that can cause pain against a party that is unfortunate enough to encounter them.

These Blights can function as a tough introduction to Plant-based monsters to fight, along with being the main enemy type within a certain area for low-level parties to traverse, such as long sprawling forests or dank swamps.

Of course, the wide range of forms means these creatures are capable of ranged combat and even grappling the Party should these beings get a chance to do so.

The Orcs, within a Campaign, can act as either an enemy towards the Party during the main storyline or as allies during the game. That is because the Orcs can be incredibly dangerous if pointed in the direction of the Party as aggressors.

With Chiefs being substantial bosses to go up against, along with different stripes of Orc that a party can end up coming across, these can be incredibly difficult for parties that are at least at the 3rd level across the board.

Kobolds and Lizard Folk were included in this spot, as they can be seen working side by side. While the Kobolds tend to act as hit-and-run fighters similar to the Goblins mentioned earlier in the List, Lizardfolk is a deadly combination of Bandits and Orcs.

Their Shamans, Kings, Queens, and other types of Lizardfolk can hold extra abilities that can be incredibly dangerous to try and go toe-to-toe with. Still, at the same time, they can be powerful allies to the Party in the same way that the Orcs can should the Dungeon Master choose to use them for such a purpose.

The different monsters listed here are all capable of giving the Party a fulfilling combat experience, regardless of whether they are in sprawling cities or murky swamps. These creatures serve as teaching experiences for new players of Dungeons and Dragons.

They also help paddle out a Campaign with combatants that could be used as a plot point later in the Campaign as either the primary antagonist or friend to the Party.