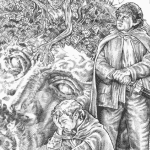 Greetings, Adventurers, daydreamers, and fantasy fanatics. In this article, we researched the best classes for Halflings and all their perks and drawbacks, and how to make the most out of them. In addition, we have explored all the mainstream combinations and ranked the top seven from best to worst.

To determine the best class for a halfling in 5e DnD, we have used the following criteria:

Best class for a halfling in 5e D&D

A halfling Rogue makes a ton of sense both from a combat perspective and from a roleplaying point of view. But, first, you get a +2 DEX bonus which is exactly what a rogue needs to be effective.

Due to their size, halflings are quick to move around, can hide easily, and are great to dip in and out of combat when necessary. Thanks to the fact that you have Lucky, you can rely on the fact that your sneak attacks won’t miss their crit. The halfling rogue also has a pretty decent AC. That means you don’t have to be as careful when fighting with your frontliners as with, for example, the Fairy. You also get a +1 WIS. That is okay, but not all that necessary for a rogue.

Another excellent option for a tiny character who wants to use the rogue class is the Fairy.

As a Halfling, you enjoy a +1 to your CHa and a +2 to your DEX stats. While I would rather see this bonus the other way around, it is still an excellent distribution for your bard. You also get a couple of interesting racial abilities like Lightfoot that are useful for a bard. Besides, support also does combat.

Bard makes it to number two on this list of the best class for a halfling in 5e because you can use the Lightfoot halfling subrace to get a ton out of this class. In addition, you have a nice DEX and CHA stat boost, and you get access to traits like Lucky and Naturally Stealthy.

This build is straightforward and effective. If you haven’t played as a bard yet, you should try the Halfling. If you want more information on this, check out the best race for a bard in 5e DnD. We have written about just that.

On to number three of our ranking of the best classes for a halfling in D&D. The druid is great for this race. The +2 Dex and +1 Wis is a good stat boost. The lore and myths behind halflings also make them pretty fun from a roleplaying perspective.

If you enjoy the trope of a tiny creature shapechanging into a colossal beast, this is one of the better races. However, if you struggle to find the ideal subclass, I would advise you to pick a ghostwise halfling. When you select this subrace, you should follow the path of the Moon Druids and use silent speech in Wild Shape.

If you want to roleplay as a believable Druid, I would strongly advise you to check out the Wood Elf in 5e DnD. This race makes a powerful and versatile druid.

To be honest, Ranger could be number 2, 3, or 4 on this list without anyone batting an eye. So, just because Ranger is number four does not mean this is a wrong class for the Halfling or even mediocre.

The +2 Dex and +1 Wis to your stats is a fantastic start to building a strong ranger. Next, the Lucky feat also aids you in getting a lot more crit damage is done if you are fighting. On top of that, you can also use your beast master companion to ride into battle; the only requirement is that your creature is size medium or larger.

The Ranger is a decent pick if you want something other than a rogue and don’t want to play as a spell caster. According to our research, the Halfling ranger is one of the best level 1 classes in D&D 5e.

Another good pick for the Halfling is the Cleric. Thanks to the Racial bonus of +2 Dex and +1 Wis, you are well on your way if you want to make a strong light armor cleric. You will need some rogue-like skills to make this built work. A good pick would be the Life Domain Cleric. You don’t need to fight much and can focus on supporting your party by using healing spells and buffs.

Note: The Dwarf is a much better pick if you want to make a strong cleric.

The Halfling is not a good frontliner and should avoid fighting hand-to-hand or at close range. However, the Paladin is one of the notable exceptions. This class is decent for a Paladin focusing on spells and supporting party members.

The lightfoot charisma increase is a decent option if you are going to play as a paladin halfling. Still, the Stout is superior because they have some extra constitution (and poison resistance).

This is only number six on our list, which means that there are much better races for a paladin in 5e that do more damage and are much more helpful in general.

The warlock relies on charisma quite a bit. Thanks to the bonus the Halfling gets to that stat; they make for pretty decent warlocks if you focus on Eldritch Blasts. Thanks to the Lucky feat they also have, the warlock is a strong pick for the best class for the Halfling.

However, those are the only two things these little creatures have going for them, so I would not recommend this class unless you want to roleplay as one.

The Halfling makes a pretty decent race for a warlock, but there are much better races for necromancers if you want to have an army behind (or in front).

We are finishing off this ranking of the best classes for a halfling in 5e with a melee build. The Fighter s the best close combat class you can pick for the Halfling. However, compared to the rogue or spell casters on this list, it falls short in damage output and overall durability.

You might want to consider fighting with a crossbow or a bow. However, if you want to focus on a halfling melee built, then the best option is to fight with a rapier.

If you want to fight in close combat as a fighter, you might want to pick a Goliath for this class in 5e DnD.

The Halfling has a lot going for it when you can stay out of combat and focus mainly on supporting and buffing your party instead of being a damage dealer. However, due to the size, the racial bonuses, the roleplaying possibilities, and the feats you have access to, we have determined that the best class for the Halfling is the rogue.

That does not mean that all other classes are much worse. They still make a very decent druid or Ranger. A lot is also determined by your party’s make-up, where the weaknesses and strengths are, and how your build can take advantage of that.

Not looking to build a supporting character? Then the Goliath Barbarian might be just what you are looking for.