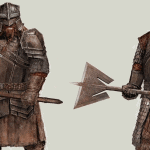 Were you daydreaming about a new campaign? Are you about to make a new character? If you want to play as a Goliath, it is more than helpful to know what the best class is for a Goliath. This guide is just what you need to figure this out. Our expert DM, Justin, with over 25 years of Dungeons and Dragons experience, will rank the classes on the following factors:

Best classes for a Goliath in DnD 5e

Without a shadow of a doubt, the best class for a Goliath is the Barbarian. This race towers above most other playable races and relies mainly on brute strength and powerful muscles.

An additional benefit – when you enjoy loot – is the size mechanic you get as a racial threat. You can carry a lot when playing this race, so you are an ultra-powerful damage-dealing pack mule when choosing this class.

Goliath is better than Half-Orcs when building a barbarian character, which says quite a lot about how good this race is. However, they have some interesting racial features like Stone Endurance, which helps boost Reckless Attack and get the most out of it.

Tip: you might enjoy reading our Goliath Barbarian 5e guide if you want to make a DnD new character.

The Paladin is an excellent class for the Goliath. A Paladin Goliath does not just need to be able to dish out damage to the forces of evil and the undead and survive combat on the front lines.

Not all Paladin builds need a massive CHA and a ton of spells to fight. Some STR-based Paladins use powerful melee attacks. The Paladin is without a doubt one of the best options picks for a Goliath if you are building that kind of DnD character.

Thanks to this race’s Stone Endurance, you can keep alive longer, and your allies will have plenty of opportunities to heal you or buff your stats with spells like Intellect Fortress. The best subclass here is the Oath of Conquest, and you should use two-handed weapons to optimize this option.

Another contender for the best class for a Goliath in 5e Dungeons and Dragons are Fighters. If you want to make a fighter character based on STR than Dex, then the Goliath is the best possible race for this class.

A Goliath Fighter is very survivable as a tank, and due to the racial threat of Stone Endurance, this only gets better. Thanks to the high amount of Hit Points this rance has, you don’t need a lot of AC to survive significant hits and intense combat.

Besides tanking hits, picking this excellent class for your Goliath also allows you to deal massive damage to your enemies. Athletics is also a fantastic skill for builts that use two-handed weapons. Finally, thanks to the fact that you can grapple like no one else, you can help your players deal tons of damage.

Are you are looking to pick an original but deceivingly strong class for your Goliath, might I suggest the Cleric? While generally speaking, Dwarves are the best choice; these humanoid Giants are not a bad pick at all for the Cleric.

By picking Cleric as your class, you might not have the best WIS or CHA, but you can make an excellent STR-based build that can heal your targets on the frontline and use spells like Life Transference without a problem.

Stone endurance and the high amount of hit points you have are once against the key in making this class work. You can also assist your allies quite well in melee combat.

Ps: Role-Playing as a 7 to 8-foot tall Cleric is more than excellent. So, I strongly recommend you try it.

While most Warlocks need a high level of CHA to be effective, thanks to the addition of stone endurance and Mountain Born, there is one Warlock subclass that does work. The Hexblade Warlock is a pretty good class for a Goliath in 5e.

Using this race for a Hexblade Warlock means you can stay on the front line much longer than a regular warlock and take a lot more risk when shooting your agonizing blast at the enemy.

While you might envision the wood elf as the quintessential Druid, the Druid is also a fantastic class for the Goliath. You might be surprised that the Druid is on the list, but there are a couple of reasons for that, and they all make a ton of sense, in my opinion.

There is one thing that your Dungeon Master will have to rule on. Does Stone Endurance work with Wild Shaped? If it does, it is a pretty powerful – maybe even overpowered – combo. So you might want to ask your DM his opinion on this before choosing to make a druid.

We can’t forget about the go-to hand-to-hand class. While the Monk is not the best class for a Goliath in 5e DnD, it is not a bad pick. However, it might be a bit misleading to put the Monk in place 7, mainly because so many different races are great picks for the monk class.

If you want to fight on the frontlines with a monk using this race, you must increase your DEX and AC quite a bit. While Stone Endurance helps a ton to tank hits, this treat will not be enough to survive intense battles, so you will need to invest quite a bit of your points in Dex at the start of the campaign.

While this won’t be a super powerful monk, a 7 to 8 feet monk fighting with his bare hands against goblins and kobolds is a pretty funny thing to roleplay and worth it for short campaigns that only handle levels 1 to 5.

The usual suspects are the best class for a Goliath in 5e Dungeons and Dragons. The Barbarian, Paladin, and Fighter are all great options to make the most out of this race. You will not regret playing as one of those three and will get a ton out of this build.

However, a couple of non-conventional choices also make wonderful picks. These are the Druid, the Cleric, the (hexblade) Warlock, and to a lesser extent, the Monk. You will most definitely be able to hold your own and have a believable roleplaying experience if you choose any of these classes for your Goliath.

We hope we enjoyed this guide! If you did, the best class for a centaur in 5e is worth checking out if you want more unconventional campaigns when playing D&D.