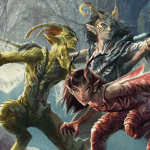 Greetings and salutation, adventurers and DMs; I hope you have had some fun campaigns. In this article, we will discuss the best classes for a fairy in 5e DnD. If we look at races beyond the usual suspects, the Fairy in 5e DnD is an all-around great playable race.

Our expert DM will look at all the mainstream classes and compare them against one another to find the best class for a fairy in 5e DnD. We take into account the following criteria:

After much consideration and going through our four criteria repeatedly, we have concluded that the Rogue is the best class for the Fairy in 5e D&D. The main advantage a fairy has when they pick the rogue class is that they have a good amount of stealth and can fly.

These two factors are just what a rogue needs to stay out of reach from the enemy or dip out and escape when things are getting too dangerous. You also have access to cunning action (which allows you to disengage as a bonus action) and Faerie Fire, which is excellent for getting more out of your Fairy when fighting.

Let’s also not forget that you can shrink yourself further and have a tiny creature size. Those two things are great for rogues. You can easily hide, scout and ambush, thanks to that.

Invest in Cha, Dex, and Int when picking this class for a fairy in 5e DnD. That way, you get to deal damage, make ability checks, and cast spells that deal severe damage.

The ranger is an excellent class for a fairy in 5e D&D. Because you have Faerie Fire which gives you more damage output from ranged attacks, you can be very useful for your party from a damage-dealing perspective. You also get access to additional spells. However, your longbow attacks will suffer.

There is one significant downside to picking the ranger class for your Fairy. You don’t have the damage boost you typically get from Hunter’s Mark, as it also requires concentration.

It is essential to choose the right feats to make the most out of this class. You should either (or both!) pick the crossbow expert feat or the sharpshooter feat. That way, the ranger is a ton of fun and extremely powerful by mid-campaign.

Number three on our list of the best classes for a fairy in 5e D&D is the druid. If you think about Fairies, you probably imagine nature, forests, and mysterious places with magical creatures. So the druid is a natural class to pick for the Fairy and is the one that completes our top three.

Note: check out guardian of nature 5e if you want to shapechange as a fairy druid.

There is one requirement for this combination to work: you need to focus on spellcasting as a druid. However, thanks to your fly -ability and your size, you will easily stay out of reach from your enemies, and you won’t have to focus on compensating for your low durability as much.

If you want to shapechange as a druid fairy, you will have a ton of fun if you have a good imagination. Nothing like scaring your opponents by going from a size small to enormous!

Check out the following guides to make sure you built a powerful Druid:

As you know, Wizards have a low AC and low CON and generally don’t take getting hit too well. If you want to get around that, the Fairy is a great race for a wizard that is all about hit and run. Thanks to the fact that you have a fly, you can keep away from melee attacks and have a free spell slot.

Enlarge, and Fairy Fire will help your party get the buffs they need to deal more damage. However, there is a reason the wizard is not number 1, 2, or 3 on this list. There is no real advantage to picking the Fairy as there is with the Rogue or the ranger class.

The same goes for the Sorcerer. But, again, the pros and cons are the same, so we are putting them at the same place in this ranking.

The Bard is a great class option for the Fairy; You get concentrations flight free, which frees up a spell slot and some extra spells. A bard fairy also has innate spellcasting, so you can shoot a couple of additional magic attacks daily.

Faerie Fire and Enlarge/Reduce are both okay, but nothing too special. However, if you have a bard that focuses on support and dealing a good amount of damage with magic, you will e more than OK picking the Bard Class.

Ensure you avoid fighting with melee as you are not durable enough to survive for long, and if you can not fly away, you will be in a lot of trouble. Also, you get to constantly make the pun “Fairy Tales” as a bard.

The Artificer is another excellent choice for your class as a fairy. You can fight at a long range while being in the air from the start. In addition, you can use your Faerie Fire to get an advantage on attacks if you use Force Ballista cannons.

There is not much to say about this class; besides, it is pretty good and fun. You could use your fairy background to make some pretty exciting stuff. Also, you can use materials related to fairies, like woods and leaves.

As the final entry on our list of best classes for a fairy in 5e, there is the Warlock. Like most other classes, the flight is a great plus to this build. In addition, you get Fairie Fire which you can combine with an Eldritch Blast or Eldritch Smith build. You can also use the Hexblade subclass on your Fairy.

The Warlock Fairy is pretty decent but not the most powerful combination. However, flying is pretty decent on a Warlock, and you get free access to fly. Another good thing is that this is the only Warlock that gets Faerie Fire on their spell list.

There you go, the seven best classes for a fairy in 5e D&D. There are many good options for this race. The best seems to be the Rogue. There are many advantages to playing as a rogue when you choose a Fairy as a race.

The thing that keeps coming back is that you have access to Fairie Fire and free fly. Both are great for a rogue and a bunch of other classes, so if you like to play strategically and stay away from close combat, these abilities will come in very handy.

My main advice would be to stay out of combat as much as possible. Fairies are not durable and should stay away from the frontlines and always have an escape plan or a way to hide from the enemy.

Making a new character in 5e DnD and want to read more like this article on the best class for a fairy 5? Then here are some suggestions: