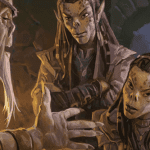 Are you playing as a wizard who can’t shut up? Or want to know what your options are when bound? Then, this list with the best verbal-only spells in 5e is just what you need when you only want to use magic with the speech component.

This list of the best verbal-only spells considers all DnD classes and is not limited to classes like the wizard, sorcerer, or Bard. To determine which ones are the best, we have used the following criteria:

We might have selected a controversial pick for our winner of the best verbal-only spells in the 5e DnD ranking, but we are pretty confident that Dimension Door can be classified as S-tier magic.

Dimension door allows you to teleport yourself from your current location to another spot within range to a maximum of 500 feet in a straight line from the current position to the desired position. You can bring objects and other willing creatures and your size or smaller.

While many beginners judge a spell by its damage, a veteran player judges magic by its potential and overall usefulness. Dimension door has so many powerful uses. Dimension door is not just strong during a fight but also when you want to run away from one or a narrative point of view. You can’t do much better as a level 4 conjuration that is verbal only.

Misty step is another strong conjuration that does not deal damage but is extremely potent if you know how to use it right. Just like Dimension Door, you can teleport. However, there are a couple of significant differences. First, the range is only 30 feet from where you are standing, and you can not bring anything or anyone else. Second, Misty Step is only a bonus action.

Just like Dimension Door, you can use Misty step often and inside and outside of combat. This conjuration is a prime example of a verbal only spell that scales with your creativity. A veteran and an experienced, smart player will get a ton of use out of this spell. Since Misty step is only level two, you have access to it very soon in your campaign.

Power word stun is maybe the most controversial pick for our verbal only spell 5e dnd ranking. Everyone will agree that it is potent and valuable; however, making it to the top three might be a bit too ambitious.

We put it so high on our ranking for a couple of reasons:

The next entry on our ranking of the best verbal-only spells in 5e DnD is similar. Power word kill, which might be the most badass name for magic next to cloudkill, is ranked just below power word stun.

Power word kill is a level 9 enchantment with a range of 60 feet. You can kill a creature you see within that range by just uttering the verbal component and nothing else. The only requirement is that the creature has 100 hit points or fewer. If it does, it dies instantly; if it does not, the spell has no effect.

While the fact that it is a level 9 enchantment is a considerable downside, using only a verbal component and having a potent straightforward finishing effect makes this a solid number four on this list of the best speech-only spells.

No list of spells that use speech is complete without the quintessential Bard Cantrip: Vicious Mockery. The cantrip is just what you imagine it to be, and you start insulting the target with a subtle enchantment. The target must succeed on a WIS saving throw or take 1d4 psychic damage and has a disadvantage on the next turn.

I love the fact that this cantrip does psychic damage. As our Mind Spike 5e article stated, not many creatures have resistance or immunity against psychic damage, making it an excellent damage type.

Vicious Mockery is a cantrip means you can start using it at level one. So you will get a ton of use out of it. Messing with your opponent’s attack rolls is also a fantastic effect, as the action economy in 5e DnD is often unforgiving.

If we are talking about great verbal only spells in D&D, then Command is up there. Clerics and Paladins can use this spell with just verbal components to force a creature that fails a WIS saving throw to follow a command.

Depending on your Dungeon Master – and what he allows in the game – this enchantment can be extraordinarily potent or weak. Since Command is a level 1 enchantment, you can get a ton of use and start using it immediately during your campaigns.

While you can not get too crazy with the Command, you can do some pretty exciting things in the vanilla version:

Oh, look, another teleport spell. Yes, they are so strong that 3 out of 8 spells that only use verbal components are on the ranking. Teleport is potent in combat, but they are even more interesting from a narrative and roleplaying perspective.

Getting around the world instantly, setting up ambushes, being able to flee, and setting traps far away are all practical uses. Teleport is fantastic for any magic caster and has the opportunity to be used almost every playing session.

Teleport is available as soon as you have a level 7 slot open. There are not many other spells I would put in that slot. If you are playing a campaign where traveling is vital, then you will need to get Teleport and will get a ton of use out of it.

One of the strongest verbal only spells is Time Stop. Yet it is pretty low on our list. The reason for that is simple. You only have access to this transmutation if you have a 9th spell slot available. There is quite a bit of competition for those slots, and the situations where Time Slop is the best in the slot are limited compared to the alternatives.

However, if you are playing a speech component-only spell wizard, it is a great pick. Likewise, if your party or you are struggling with action economy, Time Stop is a great way to fix that quickly.

Check out the article on best uses for time stop 5e in DnD.

I am finishing this ranking with one of my favorite verbal only spells. Guardian of Nature is a must-have for druids and is a quick and easy way to transform yourself into a powerful beast or tree.

Guardian of Nature is a 4th level transmutation, which is a great way to buff your druid so that it can fight on the frontlines. This transmutation might be controversial, and I am willing to take criticism on this pick; however, I do genuinely believe it is one of the top verbal only spells in 5e D&D.

List of all verbal only spells in 5e DnD

Don’t like the spells on our ranking of best verbal only spells? In this table, you can find all the magic that only requires speech components in 5e DnD. These can be found in Player’s Handbook, SCAG, Xanathar’s Guide to Everything, and Book of the Righteous. Let us know if we missed one!