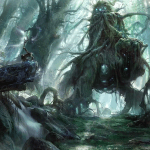 The fog is as thick as the air is murky. Although it seems to be in the middle of the day, the trees around them cover almost any evidence of the sun.

It’s hard to distinguish the sounds in these swamps. Are they friendly? Are they hostile? The putrid smells of the plants and creatures here make it seem like everything can be a threat. That’s when the party thought, “hey… when did we even get here?” Today we are talking about Swamp encounters in 5e DnD; sit back and relax!

What Should I Expect with Swamp Encounters 5e?

Besides the monsters, swamp encounters are very similar to cave encounters. For the most part, vision is limited (darkness or fog), NPCs can consist of bandits, hermits, or other types of outsiders, and the types of terrains can vary.

Again like caves, swamps do not require a map and can be built as the players progress through them due to the lack of vision. It’s relatively easy to hide creatures in the trees and murky waters or even have them camouflage in plain sight. It’s a little harder to build structures in the swamps unless it’s a temple, a tiny home, or a small cave.

This article provides insight, themes, and advice on 5e swamp encounters. Players may not find this guide as helpful since it is mostly insight into Dungeon Masters and the possibilities for them. When it comes to swamps, it’s best to keep players guessing and in the dark after all. Ps: make sure to also check out Sea encounters in 5e!

Almost every swamp in Dnd is set to have a specific theme to set the scene for the party. Is the swamp infested with toxic fungi? Is it home to fae or faerie dragons? Did it use to be a forest that overflooded one day, causing it to turn into a murky wasteland? Whatever it may be, the monsters for swamps are entirely dependent on that fact.

Although most swamps don’t precisely have a layout or system unless a powerful spellcaster is regulating the swamp, some swamps are magically altered to fit the secrets inside of them. For example, maybe there’s a secret portal that leads to a relic or a being that can grant a wish.

Or perhaps this entire swamp was made to test the courage of all who enter. With that being said, keep in mind that when considering these layouts, ensure there’s a purpose to them being set up this way.

This swamp layout invites DMs who are unprepared for the upcoming sessions and want to stall their party as much as possible: A magic swamp with ever-moving surroundings. Alternatively, this can also work for forest encounters. If the DM does not need to stall for their players, they can also use it to grind experience with their party if they are behind and are too weak for an upcoming boss.

How this layout works is simple as it sounds: the trees and pathways are ever-moving. It’s easy for players to get lost in the swamps when the trees are being magically manipulated to move. To ensure the players do not lose hope, set up checkpoints or have them find clues on navigating the swamp. It can be treated like a maze, except once they turn around, their path has already been changed.

Below are a few encounters I like to use while having this layout for swamps.

The party abruptly wakes up to two Giant toads licking the party and playing with their limp bodies out of sheer curiosity. They have no memory of how they ended up here, but it seems that their surroundings move with them whenever they take a turn.

The party was tasked to explore an intoxicated island that had gotten so far along that it turned into a toxic wasteland. However, once they get there, something deep within the swamp seems to have noticed the party’s presence, and the trees begin to move…

DMs usually like to put little tribes, villages, or communities into their swamps to give them a little personality. Big, small, gigantic, or tiny creatures can gather together inside a dangerous swamp for whatever reason. These little areas usually won’t take up a considerable portion of the swamp and typically have some sort of self-defense against the dangers in the wetlands (ex: camouflage, traps all around, etc.).

Of course, all the conditions within these environments are per DM’s discretion, for it is made up through their imagination. That being said, it is recommended that if your players ever come across this area, make sure to have a good idea of what you want this area to have.

For example, will it be exclusively for one type of creature if it’s a village? Will the town have its social status, like nobles, doctors, etc.? Are they hostile towards strangers, or do they usually respectfully welcome outsiders? Players tend to explore things that the DM hasn’t put much effort into, so try to make the layout of these areas as simple as possible unless these little environments are essential to the story.

The party stumbled across a little colony of giant slugs who strangely can communicate telepathically. They offer travelers a place to stay as the sun sets, and they have the best way to hide from whatever lurks in the shadows of the night.

The party was captured by a tribe of masked individuals who spoke an unknown language. They brought the party to their leader, who is revealed to be an extremely young elf girl. It is then revealed that the captors are all young elves hidden away here in the swamps. They worship a strange god in a nearby temple.

The party was tasked to restore the forest. Unfortunately, after being cursed by a vengeful witch, the magic forest has turned into a dangerous swamp filled with cursed, evil creatures that keep attacking nearby villages. Inside lies a town of undead villagers who were cursed while in the forest and cannot leave until the curse is lifted.

As stated, swamp encounters are best when a theme occurs within the swamp. Unfortunately, most of the monsters and encounters that Dnd books provide aren’t suited for primary swamps. There are some- just not much. However, many resources can be found online (the DnD community is highly resourceful and creative).

Primarily, there are oozes and plants in the swamps regarding encounters. The best-suited encounters are also combat-based. It is possible to do non-combat-based encounters in swamps, but they are slightly tricky to do if the DM wishes to stay in the theme of the swamp. However, they are doable- just slightly more difficult for a DM who isn’t experienced with swamps.

When setting up swamp encounters, it’s best to think of the swamps like a whirlpool. Low-leveled creatures should be at the very ends of the swamp (unless it’s propped up against a mountain or cliff). The further they progress toward the middle of the swamp, the more complex the encounters become. Then as they get farther toward the “exit,” the creatures will become weaker since they are closer to neutral territory.

I have implemented a handful of these encounters into my run sessions, and I think they went exceptionally well. The players were really into it and had a lot of fun. If I could, I would 100% do them again because it was super simple to lay out, there are a ton of maps that could work with these encounters online, and the lore I was able to build off of it had my players highly invested.

The kingdom has sent several adventurers to find a boy dragged into a nearby swamp by a phase spider in his sleep. But, as if taunting the kingdom, all that remained of those sent were the adventurer’s tattered clothes that spiders would bring back into the kingdom.

A mighty druid has teleported the party into a swamp. The swamp seems to be endless, and resources are minimal. The druid hints that the only way out is to find his temple. The catch: several hostile plants and snakes in the area may or may not crave human flesh.

A black dragon has been stalking the party ever since they entered its swamp out of boredom. Once the party settles down, the dragon reveals itself and demands the party entertain it.

A sword lies on the ground next to a corpse. It glows like a holy sword but is tied to the swamp as a trap. Whoever picks it up will slowly become insane until the sword takes over the body, wanting to collect the blood of the innocent.

Throughout the swamp, there are large imprints of an unknown beast. If the party spends the night in the swamp, they can even hear the loud thumps and splashes of water as if something gigantic is walking around. However, the imprints are the only traces of this immense beast.

I don’t do swamp encounters very much, but that’s mostly because it never fits in with the environments or quests my players go on. However, as a DM, the mind does tend to wander and imagines the “what ifs” in almost every scenario. Due to that, here’s a list of a few monsters I think would be fun to have, and some I have done myself while in the swamps!

I wouldn’t recommend a new DM to do swamp encounters due to the limited amount of resources Dnd gives. And although the internet does have an abundance of swamp maps, it takes a little knowledge to know how to implement sufficient encounters within it.

It’s one thing to throw monsters into a swamp, and it’s another thing to know the story and the intent and build on the encounter itself to immerse the players into a not-so-common environment.

If a new DM does wish to pursue swamp encounters, I would recommend possibly making sure that they prepare most, if not all, of the encounters before the session (no last-minute preparing, either!). Otherwise, the session might be a little of a disappointment to both you and your players.