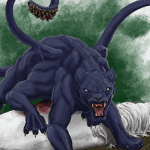 Greetings, Bards, Druids, and Rangers looking for allies and fluffy friends. The spell we discuss in this article is Animal Friendship from the 5th edition of D&D.

What is Animal Friendship 5e, and how does it work

When you cast Animal Friendship in 5e, you can convince a beast within the range that you mean no harm to it.

Choose a beast that you can see within the 30 feet range. The beast must be able to both see and hear you. The spell will automatically fail if the beast has an intelligence level of 4 or more.

If the beast’s intelligence is three or less, it has to do a wisdom saving throw. If it fails, then the beast will be charmed by your Animal Friendship. If it succeeds, there is no effect.

When you upcast the enchantment to the second spell slot or higher, you can affect one additional beast level above the first.

Stop monsters from attacking you.

There are quite a few beasts that are strong but have a low INT. One of these types is Dinosaurs. For example, the allosaurus has a 2 CR but low enough intelligence that the spell works on it. Unfortunately, many regular animals also have a low enough intelligence for the spell to work. So dangerous forests suddenly become much more manageable to explore as a low-level party.

Common beasts you might encounter during a forest walk:

Another good option for animal friendship is to stop beasts from fleeing. Often enemies can spot you by birds flying away, so you can avoid this with animal friendship. The same goes if you want to catch a particular quick animal.

For example, if you spot a messenger pigeon and don’t want to blow it to smithereens because you want to read the message, the Animal Friendship 5e spell can convince it to stay in place.

Mess with your party

Is your party picking on you? Make them see your worth by stopping a giant dinosaur from attacking you by charming it with this enchantment. Your party probably will realize that the creature is only friendly towards you, the caster. However, it will still attack other targets.

Read the following guides to make your adventures even more fun!

Does Animal Friendship tame or control the beast?

No, Animal Friendship does not tame or control the target beast. The beast is simply docile towards the caster and nothing else. In previous editions of DnD, you had a chance to tame it and teach it tricks. However, this gimmick is not the case in 5e DnD. A lot of Dungeon Masters thus homebrew the spell a bit and make this possible when the player rolls a nat 20.

Does Animal Friendship work on Druids that shapechanged?

Imagine an enemy druid shape changes into a guardian of nature beast. Does that mean you can charm the druid with Animal Friendship? Well, the only way to use this enchantment on a druid is if that druid has an INT of 3 or less. The spell will have no effect if it has an INT of 4 or more.