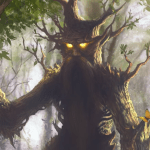 A powerful spell for the loud and proud, the Thunderwave spell announces to enemies that the spellcaster is a thunderous force to be reckoned with. As a 1st level evocation spell, bards, wizards, sorcerers, and druids, can bring forth a thunderous wave from themselves to sweep away their mortal enemies.

What is Thunderwave 5e

A wave of thunderous force sweeps out from you. Each creature in a 15-foot cube originating from you must make a Constitution saving throw. On a failed save, a creature takes 2d8 thunder damage and is pushed 10 feet away from you. On a successful save, the creature takes half as much damage and isn’t pushed.

In addition, unsecured Objects within the area of Effect are automatically pushed 10 feet away from you by the spell’s Effect, and the spell emits a thunderous boom audible out to 300 feet.

At Higher Levels: When you cast this spell using a spell slot of 2nd Level or higher, the damage increases by 1d8 for each slot level above 1st.

In the moments where you find yourself surrounded by mobs and hostile creatures, the Thunderwave spell can be there to save you. Especially if you are facing multiple enemies at a time in close-range combat, the Thunderwave spell’s area of effect (AoE) range and the added 10 ft push also help give you some leg room.

What’s more, due to the rarity of the Thunderwave spell’s saving throw, it gives a higher chance of having the creatures fail it. With this, you can escape without triggering an attack of opportunity. So, if you ever find yourself in a pinch, the Thunderwave spell is the way to go.

In the coming of your future adventures, you may find yourself delving into deep dungeons, searching around ancient ruins, and exploring mysterious manors. But you never know what lies among the shadows. May it be rogue tricksters or even invisible mages lurking about, the Thunderwave spell can surely clear out an area of concern.

Since the spell creates a 15 ft cube, surely, any enemies hiding would be cleared out. Whether it may be a vent or just around the corner, the spell still affects them if you cannot see them. Remember that your location will be revealed, given the booming presence of the Thunderwave spell.

Bright flashing lights, fans pushing and shoving to get a better look, the crowd screaming at the very sight of them, and that’s what you call celebrity presence. If you are ever lucky enough to work with a celebrity, this is your chance to show them who you are and what you’ve got!

With the Thunderwave spell, you can be a great bodyguard for them! If you and your celebrity boss don’t mind scuffing some of the fans and paparazzi, you can cast this to push them away when you need to. But do take in mind that the thunderous roar might attract the roar of an even larger crowd.

4. A Thunderous Call and Distraction

Do you need a distraction to lure in your enemies? Well, the best distraction is here, thanks to the Thunderwave spell. With its thunder booming from you, enemies as far as 300 ft away can surely be alarmed unless they’re deep sleepers.

What’s more, with its other features, you can add to the distraction by ruining some of your enemies’ prized possessions, as the spell with push away any unsecured object.

This can also be useful to alarm your fellow party members if you’re out of reach or in trouble. They’ll surely know only a certain spellcaster who can do that!

The Thunderwave spell can make a statement for every bard, druid, sorcerer, and wizard. With its thunderous roar waving through the area and the additional push, your enemies can be shown who’s boss around here. Especially since it has a rare damage type and a rare saving throw, there’s a high chance that it will hit and effects will work on the enemy.

However, this may not be the best spell for an upcoming espionage mission, given the range of 300 feet of noise that the Thunderwave spell emits. Therefore, it’s important to consider what is to come in your next adventure so that you can use this spell to the very best of its capabilities. All in all, the Thunderwave spell is a great one for players of every level. Make sure you also check out our Lightning bolt 5e guide if you like to make your campaign more electric!

Does the Thunderwave spell work if you’re trapped inside a giant creature?

If you ever find yourself in the position where you’ve been eaten whole by a whale or a giant salamander, it is still possible to apply the Thunderwave spell. This would cause an explosion in every direction while inside the giant creature.

Where does the Thunderwave spell push enemies?

If the enemy fails the Thunderwave spell’s Constitution saving throw, the enemy will be pushed 10 feet away from the point of origin, the caster. This push would be outward in all directions from the caster themself.

If you use the Thunderwave spell and it pushes away an opponent, is there an attack of opportunity?

Unfortunately, no, an attack of opportunity would not be triggered if an enemy fails their Constitution saving throw and is pushed away. According to the reaction’s description, “You can make an opportunity Attack when a Hostile creature that you can see moves out of your reach.” Since the enemy has moved away unwillingly, it doesn’t meet the requirements to use the reaction.

Does Thunderwave rebound back to the caster if they are in a tight space?

No, it does not rebound since it is not detailed in the Thunderwave spell’s description. However, if you find yourself in a confined space, such as a hallway or a dungeon, you don’t have to worry about it returning to you since the spell still carries out the effects described.