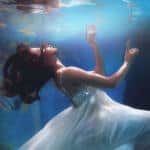 As a wizard, you sometimes end up in the weirdest places. Jungles, dungeons, goblin caves and occasionally, 300 feet deep in the ocean. You might be wondering, can I do underwater spell casting in 5e, and what rules apply to it?

Well, you have come to the right place! I am going to share with you my personal experiences both as a Dungeon Master and as a player on how to cast spells underwater and what you can and can not do. The same rules apply to 3.5 and pathfinder, so you can use this article as a reference for those games as well.

The guide is aimed at both beginners and veterans, and at players and dungeon masters. If you have any questions or a suggestion on how to improve the guide, let me know!

What do you need to cast a spell in DnD

You can’t just cast a spell in Dungeons and Dragons. You need to have an adequate level, an open spell slot, having learned the spell, the appropriate class, and of course, the components.

For underwater spell casting, I am going to focus on the last aspect. The components you need to use magic in DnD. In 5e, there is not a single spell that does not use components. That means you will always need one out of the three. We are going to take a deep dive into those three now.

Having the appropriate material

The material component of a spell is indicated in the player handbook with an (M). There are a ton of spells that require materials to be able to cast them. A great example of one of such spells is Animate Dead. To be able to use this spell you need to have either a corpse or a skeleton. If you have a skeleton you can animate a skeleton to fight for you, if you have a corpse with flesh, you can animate a zombie. If you have no materials, nothing happens after you have cast animate death.

Some players do not enjoy needing materials to cast a spell because it requires inventory management and gathering items. I have written a summary of all the spells that do not use materials for you to use in your campaigns.

Being able to move

There are a lot of magical attacks that require you to move. This is indicated with the somatic component, in the Player Handbook this has been abbreviated with an (S)You need to be able to make certain hand movements, and you should be able to point at a target.

That means your hands need to be free, and your character can not be bound or in a very tight space. Of course, if your character has been targeted by Feign Death and has been paralyzed, you won’t be able to do this too.

Being able to speak

This is going to be the main issue if you want to use magic underwater in DnD. The Verbal component (V) is used for a ton of magic and if you are submerged you can not produce audible noise. The only exception is when you have the ability to speak underwater. In my Homebrew campaigns, I also count being proficient in the Aquan language as being able to produce water underwater.

Aren’t you able to speak underwater, or are not versed in the primordial language of Aquan? You must be wondering what magic you can still cast underwater. I have compiled every single spell in 5e that you can cast without a verbal component! Check it out if you are interested in a no materials used to campaign.

How is it possible to cast a spell underwater in 5e?

Yes, you can cast spells underwater in 5e DnD. However, there are a couple of things you need to take into account. There are no official rules on it, so take my advice with a bit of salt and make sure you take into account what you think is the most fun way to play the game.

These are some rules you can implement for underwater magic combat that I use or other DMs recommend. Feel free to tweak these or combine these rules and limitations if you think it is appropriate for your DnD campaign.

Underwater combat is pretty hard to do right when you are a dungeon master. Fighting underwater is very restrictive, so you will need to take this into account. There is no way your adventuring party is just as effective as in open air.

If you have ever been to the pool, you know that moving through water is not just much slower, it is also much more exhausting. In the world of DnD that means this is difficult terrain. The characters and creatures, that do not have special movement abilities in the water, move at half the speed including the somatic movements for underwater spell casting.

However, I only do this if they are swimming. If they are fighting underwater and not just in the water, I make my players get exhausted much quicker and take away their bonus actions in some cases. A bit too harsh? Maybe, but it does make it a lot more challenging.

Both melee weapon attacks and ranged weapon attacks get a disadvantage in my campaigns. You can make exceptions for certain weapons like some dungeon masters do for example the net and javelin (harpoon), but in my opinion that makes zero sense.

Just because those weapons are often used in the water, doesn’t mean they are exempt from the rules of aerodynamics. Water is has a lot more resistance than air, no matter which weapon you use.

I give everything and anyone a full resistance to fire damage and the effects of fire underwater. Even a spell like Create Bonfire has no effect in my campaigns. For much stronger magical spells, you can half or quarter their damage, and pretend that they are not firing water but steam bubbles and extremely hot water.

This way your wizard that loves to uses fire still has some options and doesn’t need to sit this one out.

Top underwater spells you can cast in DnD 5e

Well, anyone… I mean, if you have learned the spell, and have all the requirements for this. You just don’t need a verbal component or be able to speak underwater to use the spells in this list. If you ever find yourself underwater, you can use this list to find the appropriate magic to use.

There are no official rules on using magic underwater. That means you will have to rely on common sense and game knowledge of your Dungeon Master. There are only a few situations where you will have to do combat underwater, like when an Arcane Gate teleports you there, so do not overthink this too much.

In this article, I have proposed a few solutions on how I, and other Dungeon Masters, handle this situation. I strongly advise you that you just pick the option that seems the most fun and does not require you to follow the rules too much.

In both 3.5e and 5e you can use underwater spells to fight with magic. However, there are a couple of rules you should apply to do this. I think you should not be able to use weaker fire spells, your spells should have a disadvantage when underwater spell casting and the range should be diminished. I would also advise you to implement the rule that your players or NPCs need to be able to speak underwater to do magic. If not, they should only be able to use spells that have no verbal component.

Do you enjoy learning more about Dungeons and Dragons gameplay? Then you should check out one of the guides I have written: How to heal your undead monsters.